Bravo is an American pay television network, launched on December 8, 1980. It is owned by the NBCUniversal Television and Streaming division of NBCUniversal, a subsidiary of Comcast. The channel originally focused on programming related to fine arts and film. It currently mainly focuses on lifestyle reality television series targeted at 25–54-year-old women as well as the gay community.

Bravo originally launched as a commercial-free premium channel on December 8, 1980. [2] [3] It was originally co-owned by Cablevision's Rainbow Media division and Warner-Amex Satellite Entertainment; the channel claimed to be "the first television service dedicated to film and the performing arts". [4] [5] [6] The channel originally broadcast its programming two days a week and—like Bravo's former sister network Nickelodeon, which shared its channel space with Alpha Repertory Television Service—shared its channel space with the adult-oriented pay channel Escapade, which featured softcore pornographic films. [7] In 1981, Bravo was available to 48,000 subscribers throughout the United States; this total increased four years later to around 350,000 subscribers. [8] A 1985 profile of Bravo in The New York Times observed that most of its programming consisted of international, classic, and independent film. Celebrities such as E. G. Marshall and Roberta Peters provided opening and closing commentary to the films broadcast on the channel. [8]

Performing arts programs seen on Bravo included the show Jazz Counterpoint. [8] During the mid-1980s, Bravo converted from a premium service into a basic cable channel, although it remained a commercial-free service. [9] Bravo signed an underwriting deal with Texaco in 1992 and within a month broadcast the first Texaco Showcase production, a stage adaptation of Romeo and Juliet. [10] By the mid-1990s, Bravo began to incorporate more PBS-style underwriting sponsorships, and then began accepting traditional commercial advertising by 1998. [7]

In the Encyclopedia of Television, Megan Mullen perceived certain Bravo programs as "considered too risky or eclectic for mainstream channels". Those programs were Karaoke and Cold Lazarus, the final serials by British playwright Dennis Potter shown by Bravo in June 1997, and Michael Moore's documentary series The Awful Truth from 1999. [10]

In 1999, Metro-Goldwyn-Mayer acquired a 20% stake in the channel, which it subsequently sold back to Rainbow Media in 2001. NBC bought the network in 2002 for $1.25 billion; it had owned a stake in the channel and its sister networks for several years up to that point. [11] NBC's then-parent company, General Electric, merged the network and its other broadcast and cable properties with Vivendi Universal Entertainment in May 2004 to form NBC Universal. 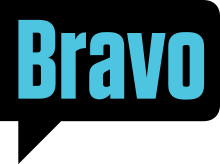 In more recent years, Bravo has put the spotlight on cultural, regional and relationship diversities with a few of its reality series, such as: Million Dollar Listing, Shahs of Sunset, Married to Medicine, Newlyweds the First Year, Southern Charm and " Real Housewives". Bravo Media released its first ever scripted series, Girlfriends' Guide to Divorce, in the later half of 2014, which earned impressive ratings, causing the green light for a second season.

A study released in May 2008 ranked Bravo as the most recognizable brand among gay consumers. [13] Bravo's age demographic is people 18–54, according to the Cable Television Advertising Bureau's cable television profiles. [4]

On February 7, 2017, coinciding with the premiere of new original series Imposters, Bravo updated its imaging with a refresh to its speech bubble-inspired logo, with the letters now all rendered in lowercase (replacing the wordmark text based on the logos used by the channel between 1994 and 2005), and a neutralized imaging to attract more male viewers. The "...by Bravo" marketing tag will also be phased out from general use. [14]

Bravo's programming schedule primarily includes originally produced programming, particularly reality content. Most popularly, the channel is known for its TV franchises The Real Housewives and Inside the Actors Studio, as well as Top Chef, Flipping Out, and Married to Medicine. The channel also airs reruns of series from parent network NBC and occasionally other NBCUniversal-owned networks, off-network series, including those from NBCUniversal Television Distribution, and feature films, primarily from the Universal Pictures catalog. Bravo utilizes block programming for both new shows and existing ones such as its "Fashion By Bravo" block. [15]

Following its acquisition by NBC, Bravo began to supplement NBC Sports coverage of the Olympic Games, airing live events during the overnight and morning hours during the 2004 Summer Olympics; this coverage continued with the 2006 Winter Olympics. The channel carried no coverage during the 2008 games, as NBCUniversal had acquired Oxygen, allowing Bravo to continue to carry its regular programming schedule during NBC coverage of the Games. In 2012, the network served as the near-exclusive home for the Games's tennis tournament at Wimbledon, with up to 56 hours of coverage except for the men's and women's singles finals, which aired on NBC. [16] During the 2016 Rio Olympics, Bravo served as the exclusive home of the entire tennis tournament.[ citation needed]

Bravo began broadcasting in the 1080i high definition format in 2007, and is available on all major cable and satellite providers.

Before Bravo broadcast in HD, the current Olympic Channel launched as Bravo HD+ in 2003. It had a completely different schedule than the main Bravo schedule, acting as a "demo channel" with only programs made in the HD format. It transitioned to a more general format as Universal HD in 2004 after the NBC/Universal merger.

An Australian channel called Arena rebranded its on-air presentation in 2008 to align with Bravo as a result of an agreement with Bravo Media. [17] Arena uses the now-former Bravo slogan "Watch What Happens" and has access to Bravo-produced programming. [18] As of July 2020, the channel has rebranded with a new logo as Fox Arena and has added content from other providers such as WarnerMedia.

A Canadian version of Bravo was launched in 1995 by CHUM Limited. The channel originally aired much of the same genres of programming aired by its American counterpart, though it has diverged to carry more dramatic programming rather than the American network's reality focus due to its compliance with its original remit from the Canadian Radio-television and Telecommunications Commission (CRTC) to air programming related to arts. Current owners Bell Media relaunched the channel in 2012, complete with the adoption of a new logo; there is now essentially no connection between the two channels other than a shared name. The channel carried the few arts-related series aired by the American version (such as Inside the Actors Studio and Work of Art), while Bravo's reality programs have been picked up by Corus Entertainment's Slice, Food Network Canada, HGTV Canada.

MediaWorks New Zealand announced that it would close the youth-oriented free to air channel Four in July 2016 and replace it with Bravo as part of a deal with NBC Universal. [19] As of December 2020, the New Zealand channel is co-owned by Discovery, Inc.

A Brazilian version of Bravo was launched in 1996 by a partnership between TVA - then Grupo Abril's television arm -, TV Cultura and the original American network. [20] The channel produced original programming like the Brazilian version of Inside Actor's Studio called Studio Brasil. In August 1999, Bravo was rebranded as Film&Arts after Bravo Networks took the fully control of channel's administration. [21] In 2000, Bravo Networks sold Film&Arts to Chellomedia's Pramer. AMC Networks acquired Chellomedia in 2014 putting Film&Arts in AMC International Networks' portfolio. As 2016 the channel was no longer available in Brazil after being dropped out by several cable and satellite providers.