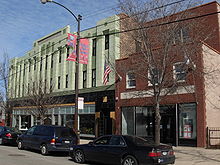 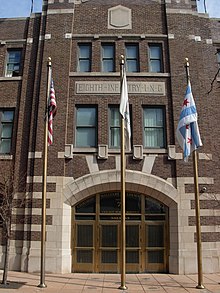 Black Metropolis–Bronzeville District is a historic district in the Bronzeville neighborhood of South Side, Chicago, Illinois.

The neighborhood encompasses the land between the Dan Ryan Expressway to the west, Martin Luther King Jr. Drive to the east, 31st Street to the north, and Pershing Road (39th street) to the south.

The historic district includes nine structures that were accorded the Chicago Landmark designation on September 9, 1998. [1] These buildings are:

Six of the nine were already individually listed on the National Register of Historic Places−NRHP as a multiple property submission, on 30 April 30, 1986. These are the Overton Hygienic Building, Chicago Bee Building, Wabash Avenue YMCA, Unity Hall, Eighth Regiment Armory, and Victory Monument. However, the Black Metropolis–Bronzeville District is not an NRHP-listed historic district.

The South Side Community Art Center is also now a designated Chicago Landmark in the district.