From Wikipedia, the free encyclopedia
(Redirected from Belgian American)

Belgian Americans are Americans who can trace their ancestry to immigrants of Belgium who emigrated to the United States. While the first natives of the then-Southern Netherlands arrived in America in the 17th century, the majority of Belgian immigrants arrived during the 19th and 20th centuries.

According to the 2010 US census, there are 361,667 Americans who identify themselves as partially or fully of Belgian ancestry. [2] 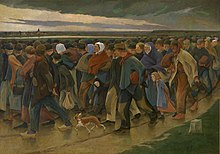 The Emigrants (1896) by the Belgian artist Eugène Laermans

During the 17th century, colonists from the Southern Netherlands (the area of modern-day Belgium) lived in several of the Thirteen Colonies of North America. Settlements already existed in New York — in Wallabout (Brooklyn), on Long Island and Staten Island—and New Jersey ( Hoboken, Jersey City, Pavonia, Communipaw, and Wallkill). Later, other settlers moved into the Middle States. Many names are derived from the Walloon reformed immigrants who settled there and the Dutch versions of Walloon words used to describe a locale. There were also Southern Netherlands colonies in Connecticut, Delaware, and Pennsylvania established primarily by Walloons, many of whom arrived with the Dutch West India Company (founded by Willem Usselincx, a Fleming). 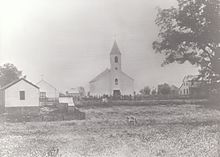 The first major wave of people from Belgium came to United States during the 19th century, looking for financial opportunity and a better life for their families (in common with other Western Europeans). Belgian immigrants were first registered in 1820; from then to 1910, 104,000 Belgians entered the U.S. and from 1910 to 1950, the number dropped to 62,000. Between 1847 and 1849 (when Belgium was plagued with disease and economic hardship), 6,000–7,000 Belgians a year arrived in the United States. Antwerp in Belgium was also one of the largest ports for emigration to America and regular Red Star Line ships connected the port with the United States and Canada.

During this era, most Belgians coming to the U.S. were farmers, farm workers or miners; craftsmen (such as carpenters, masons and cabinetmakers) or other skilled tradesmen (such as glass blowers and lace-makers). In later years (especially after the World Wars), many Belgians arrived in the United States seeking work in universities, laboratories and industry. Several Dutch-language newspapers were published by Belgian immigrants, including the Gazette van Moline (1907–40) and the Gazette van Detroit (1914–2018). From 1820 to 1970, about 200,000 Belgians settled in the United States. For every year since 1950, the immigration quota has remained fixed at 1,350; in 1981, Belgians represented no more than 0.4 percent of the foreign-born population. [3]

Namur, Wisconsin, a Belgian American settlement named after the Belgian city of Namur

Wisconsin has the United States's largest Belgian American settlement, located in portions of Brown, Kewaunee and Door counties adjacent to Green Bay. In 1994 a historical marker was dedicated at Namur (Door County), Wisconsin denoting the surrounding area on the National Register of Historic Places. Walloon-speaking Belgians settled in the region during the 1850s, and still constitute a large part of the population.

A number of elements demonstrate the Belgian American presence: place names (Brussels, Namur, Rosiere, Luxemburg, Charleroi), a local French patois, common surnames, unique foods (booyah, trippe, jutt), the Kermesse harvest festival and architecture. Many original wooden structures belonging to Belgian Americans were destroyed in a firestorm which swept across southern Door County in October 1871; a few stone houses (made of local dolomite) survived. More common are 1880s red-brick houses, distinguished by their modest size and gable-end, bull's-eye windows. Some houses have detached summer kitchens, with baking ovens appended to the rear. The Belgians, many of them devout Catholics, also erected small roadside votive chapels like those in their homeland.

According to the 2000 U.S. census, there were 360,642 Americans whose ancestors came from Belgium. The states with the largest Belgian communities are:

Also some medium communities are in Washington, [4] Tennessee, Kentucky, Missouri and Iowa.

The majority of Belgian Americans are Roman Catholic, although some are Presbyterians and Episcopalians. By 1900, Belgian religious orders were present in 16 states. The Sisters of Notre Dame, from Namur, established bilingual schools in 14 of those states and the Benedictines built missions in the western part of the country. The Jesuits founded St. Louis University in 1818, expanding the university's influence with Belgian teachers and benefactors. Belgian immigrants do not usually have churches of their own, attending Catholic churches founded by other ethnic Catholics. However, two more-homogeneous groups (in Door County, Wisconsin and Detroit) established churches of their own.

Since then, Belgians have established several churches in the United States. In 1853 a Belgian missionary, Father Edward Daems, joined with a group of immigrants to establish a community in Bay Settlement, Wisconsin known as Aux premiers Belges (Naar de eerste Belgen) ("to the first Belgians"). By 1860, St. Hubert's Church was built in Bay Settlement and St. Mary's in Namur. Also built in the 19th century were St. Michael's, St. John the Baptist and St. Joseph's in Door County, the French Presbyterian Church in Green Bay and small, roadside chapels for people who lived too far away to attend parish churches regularly.

In 1834 Father Bonduel of Commnes, Belgium was the first priest to be ordained in Detroit. The first Catholic college (1836) was operated by Flemish Belgian priests, and the first school for girls was founded (in 1834) by an order of Belgian nuns. By 1857 Catholics in Detroit were a sizable group, and in 1884 the first Belgian parish was established. However, many Belgian Catholic parishes have disappeared or merged with other parishes due to the shortage of priests. [3]

Main article: Belgian immigrants in Wisconsin during the Civil War

Belgian Americans fought in the American Revolutionary War, both World Wars and the Korean and Vietnam Wars. During World War I Belgian Americans gave generously to the aid of children who were victims of the war, resulting in an official delegation from Belgium to the United States honoring their efforts in 1917. [3]