From Wikipedia, the free encyclopedia
This article is about Amtrak's automobile-carrying passenger trains on a route called "Auto Train". For other uses, see Autotrain (disambiguation).
Amtrak railway service

Auto Train is an 855-mile-long (1,376 km) scheduled daily train service for passengers and their automobiles operated by Amtrak between Lorton, Virginia (near Washington, D.C.), and Sanford, Florida (near Orlando). Although there are similar services around the world, the Auto Train is the only one of its kind in the United States. [3]

Passengers ride either in coach seats or private sleeping car rooms while their vehicles are carried in enclosed automobile-carrying freight cars, called autoracks. The train has a maximum capacity of 320 vehicles. The train also includes lounge cars and dining cars. The Auto Train service allows its passengers to avoid driving Interstate 95 in Virginia, North Carolina, South Carolina, Georgia, and Florida, while bringing their own vehicle with them.

The service operates as train 53 southbound and 52 northbound. The train is non-stop between its terminal at Lorton, Virginia, and Sanford, Florida. Amtrak's Auto Train is the successor to an earlier similarly named service operated by the privately owned Auto-Train Corporation in the 1970s.

The original Auto-Train operated on Seaboard Coast Line Railroad and Richmond, Fredericksburg & Potomac tracks. It was operated by Auto-Train Corporation, a privately owned railroad founded by Eugene K. Garfield. Garfield had worked at the U.S. Department of Transportation. The Department had funded a study of the practicality of an automobile-train service. Garfield resigned and used the study as the blueprint for his enterprise. The company used its own rolling stock to provide a unique rail transportation service for both passengers and their automobiles in the United States, operating scheduled service between Lorton, Virginia, near Washington, D.C., and Sanford, Florida, near Orlando, Florida. [6]

Passengers rode either in wide coach seats or private first-class sleeping compartments while their vehicles were carried in enclosed autoracks. The train included dining cars and meals were served. The equipment of the Auto-Train Corporation was painted in red, white, and purple colors. The typical train was equipped with two or three General Electric U36B diesel-electric locomotives, 75 ft (22.86 m) double-deck auto carriers, streamlined passenger cars, including coaches, dining cars, sleeping cars, and 85 ft (25.91 m) full- dome cars, and a caboose, then an unusual sight on most passenger trains. Auto-Train's first auto carriers were acquired used, and started life in the 1950s as an innovation of the Canadian National (CN) Railroad. The CN bi-level autorack cars had end-doors. They were huge by the standards of the time; each 75-footer (23.86 m) could carry eight vehicles. [6] [7]

Auto-Train Corporation's new service began operations on December 6, 1971. The Auto-Train was immediately popular with the traveling public and at first enjoyed financial success as well. [8] In FY 1974 the company turned a profit of $1.6 million on revenues of $20 million. In May 1974 service began over a second route between Florida and Louisville, Kentucky, and the company was mulling additional service between Chicago and Denver. [7] The Louisville extension proved to be the company's undoing. The decaying Louisville and Nashville Railroad track between Louisville and Florida (which also hampered Amtrak's Floridian) hindered operations, and a pair of derailments stretched the company's finances to the breaking point. Service ceased in April 1981. [6] [9] [10] 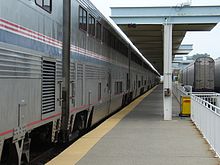 Platform at Lorton station. Superliners are lined up at the left, with autoracks visible to the right. 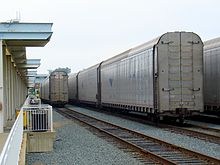 Autoracks lined up at their loading ramps at the Lorton station. The ramps are not visible from this angle.

Autoracks lined up at their loading ramps at the Lorton station.

After a period of 22 months without service, the service was revived by Amtrak, which operates most intercity passenger trains in the United States. Amtrak acquired the terminals in Lorton and Sanford and some of the Auto-Train equipment. On October 30, 1983, it introduced its new version of the service (under the slightly modified name "Auto Train") on a triweekly basis. Daily service was introduced a year later.

Amtrak continued to use the bi-level and the tri-level autoracks that Auto-Train had used. For passenger equipment, it initially used a mixture of former Auto-Train railcars and mid-century long-distance railcars from Amtrak's general fleet, all rebuilt to Amtrak's "Heritage Fleet" standards. In the mid-1990s, Amtrak replaced all these passenger railcars, which were of the conventional single-level type, with its newer, bi-level Superliner I and II equipment. In 2006, the aging bi-level, tri-level, and "van" autoracks were phased out and replaced with 80 new autoracks. [11] Unlike the old racks, the new racks have uniform heights, and are most similar to the "vans" of the previous fleet. As of 2018 [update], an Auto Train consist is normally made up of two General Electric P40 locomotives (and sometimes a third engine) and up to 50 railcars (passenger and autorack), for a total length of 3⁄4-mile (1.2 km) or more. A typical train has one transition sleeper (for the crew), six sleepers (including two with all Deluxe Bedrooms on the upper level), one diner and one lounge for sleeper passengers, four coach cars and a cafe for coach passengers, and 20–30 autoracks. The Auto Train is often said to have the longest passenger train in the world, [12] although (as mentioned previously) it may be best regarded as a mixed train, rather than as a pure passenger train.

There are two Auto Train consists in simultaneous operation each day. At 4:00 pm, the trains depart from their terminals in Lorton and Sanford. [2] They make one scheduled stop each for servicing only (passengers cannot board or disembark) at the approximate midpoint of the 855 mi (1,376 km) route in Florence, South Carolina, where the engines are refueled and a new operating crew boards (engineer and conductor). Southbound #53 arrives the next day in Sanford at 8:58 am, and northbound #52 in Lorton at 8:59 am, for average speed between termini of approximately 50 mph (80 km/h). [2] [13]

Auto Train operates on the same route it and its predecessor have always used, with a majority of the route owned by CSX Transportation and 16 miles of track being owned by SunRail. The trains are known by their route numbers (53 southbound and 52 northbound) internally by Amtrak. When communicating on the CSX road channels, they are known by their CSX designations: P053xx and P052xx, where xx is the 2-digit date at which the train departed its origin station. [14] For example, a southbound train that departed on the 23rd of the month would be known as CSX P05323 on the road channels. This allows for unique identification in the event that two trains on the same route are operating simultaneously.

The Auto Train was the last Amtrak service to permit smoking on board. Amtrak discontinued the practice on June 1, 2013.

The train operates every day. At 11:30 am, the station gates are opened to allow the vehicles into the vehicle staging area. [16] [2] Here, each vehicle is assigned a unique number, which is affixed to the driver's door magnetically. The vehicle is typically video surveyed to document any preexisting dents and other damage, in the event a damage claim is later filed. The passengers leave their vehicles here and take their carry-on bags with them into the station to await boarding. The vehicles are then staged near the autorack ramps by size and length for optimal loading order, and are then loaded onto the autoracks. In the case of motorcycles, the owner assists with tying their bikes down to a dedicated motorcycle carrier which is then loaded into the autorack. Passengers do not have access to their vehicles during the trip. In April 2013, Amtrak started offering Priority Vehicle Offloading, a time-saving option that ensures that when the train reaches Lorton or Sanford, their vehicle is one of the first 30 vehicles offloaded from the autoracks. [17] [18] This service incurs a $60 or $65 charge, depending on peak or off-peak travel times. [2]

By 2 pm, the last motorcycles and vehicle/trailer combinations are accepted. [16] [2]

Passenger boarding begins at 2:30 pm. [2] The last vehicles and passengers are accepted up until 2:30 pm, [2] at which time the autoracks are closed and coupled together, the passenger cars are coupled together in the case of Sanford departures, and the autoracks are coupled to the rear of the consist. Passengers arriving late are given the option of rebooking for another date or accepting a e-voucher which is valid for a year. At 4 pm, the train departs the station. [2]

There are two, three, or even four dinner seatings, depending on the number of passengers. Dinner seating is limited at each seating time and dinner tickets are distributed from the ticket office on a first come, first served basis. Each seating is announced over the intercoms in each car, and in each sleeping compartment. Meals are included in the ticket price through January 14, 2020, after which time they are included for sleeper passengers and coach passengers have an option of purchasing food from a cafe car. At approximately midnight, the train briefly stops in Florence, South Carolina, for refueling and rewatering. A new train and engine crew takes over at Florence.

At 8:59 am, southbound 53 arrives in Sanford, and at 8:58 am, northbound 52 arrives in Lorton. Passengers cannot immediately detrain at this point, as the autoracks are first decoupled from the consist, and in the case of the Sanford station, the passenger cars are split into two sections to fit on Sanford's shorter platforms. At this point the passengers are then allowed to detrain and move to the auto claim area. Cleaning crews move into the train after passengers disembark, and the train is re-supplied with food and water. The passenger cars' seat backs are flipped to allow everyone in coach to ride facing forward.

The autoracks are further split into three to six sections and each section is aligned with a loading ramp (see picture). The doors between each are opened, and connecting ramps are lowered to allow vehicles to move between cars. At this point vehicles begin to roll off the autoracks and to the claim area, where they are identified and announced by the vehicle number that was attached to the vehicle at the origin station. Vehicles are not unloaded in the same order they were loaded. [19] It normally takes one hour to unload all vehicles from a full train.

Lorton, Virginia, is about a half-hour drive south of Washington, D.C., near Interstate 95 in Northern Virginia. Amtrak's new Lorton terminal opened in early 2000 as a replacement for the original station built during the 1970s, and features a large, modern waiting area with high glass walls. [20] The station was designed by architect Hanny Hassan. The suspended sculpture in the lobby was designed by Patrick Sheridan. [21] The platform is 1,480 feet (451 m) long.

Lorton was selected as site of the northern terminal because the 20-foot-2-inch (6.15 m) height autoracks were too tall to pass through the First Street Tunnel into Washington, D.C. [22]

Sanford, Florida, is the southern terminus and is about a half-hour drive north of Orlando. The original facility was older and smaller than the terminal at Lorton. Currently[ when?], the Auto Train loads its passengers on two tracks in Sanford, as no one track is long enough to accommodate all the passenger railcars. Sanford's operation is unique in that a railroad crossing runs through the middle of the rail yard. This complicates some switching procedures and also produces the need for a three-man yard conductor crew – conductor, assistant conductor, and a utility conductor – as opposed to Lorton's two-man operation, with only a conductor and assistant conductor. Both yards operate with one engineer. Sanford serves as the main mechanical and maintenance location for Auto Train, with diesel and car shops to service the fleet. The city of Sanford provides a shuttle bus to the historic district departing every 20 minutes between noon and 2:00 pm free of charge on all days except Sundays and certain major holidays. [2]