From Wikipedia, the free encyclopedia
‹ The template Infobox recurring event is being considered for merging. ›

The ACL Music Festival has eight stages where musical groups from genres including rock, indie, country, folk, electronic and hip hop perform for fans. The concerts continue from 10 AM to 10 PM on Friday, Saturday, and Sunday during the festival with various stages spread out in the park. Approximately 450,000 people attend the festival each year. [2] In addition to the music performances, there are food and drinks, an art market, a kids area for families, and other activities for attendees.

Founded in 2002, the festival began as a one-weekend event and remained as such through the 2012 date. On August 16, 2012, Austin City Council members voted unanimously to allow the Austin City Limits Music Festival to expand to two consecutive weekends beginning in 2013. [3] Artists who have played at the festival include Metallica, Red Hot Chili Peppers, Depeche Mode, The Cure, Arctic Monkeys, Guns N' Roses, Tame Impala, Robyn, Arcade Fire, The Rolling Stones, Muse, Vampire Weekend, The Flaming Lips, Radiohead, Nick Cave and the Bad Seeds, Pearl Jam, Foo Fighters, and many more.

The reputation of the ACL television show helped contribute to the success of the first music festival. The historic Austin City Limits television series focused for many years on Texas singer/songwriters, country and folk performers, and instrument specialists. That has changed as the award-winning television series now resembles the Festival lineup and spotlights artists of every musical genre from rhythm and blues to rock, jazz, and alternative. Now that the festival is an established destination, it brings major bands to the television show that might not otherwise have made the trip. In past years, Pearl Jam, My Morning Jacket, Wilco and The National have all performed for both the festival and the show. [4] 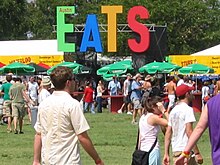 The ACL Art Market features numerous art vendors and is located in the center of Zilker Park; all booths are open throughout the duration of the festival. [7]

In 2015 it was announced that the Auckland City Limits Music Festival would debut at Western Springs stadium in Auckland, New Zealand in early October 2016. The festival will showcase over 40 artists from a broad spectrum of musical genres, and highlight local culinary, artisans, festival fashion, an area for children, and a new festival forum for speaking on and exchanging cultural and innovative ideas.

In spring of 2018 Sydney City Limits made its debut at Brazilian Fields and Parade Grounds at Centennial Park in Sydney, Australia. This festival was one day and featured 28 bands on four stages. It had many of the same activities and features as Austin City Limits such as Sydney Eats, Sydney Market, and Sydney Kiddie Limits.