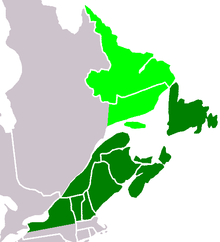 The Atlantic Northeast is a region of North America which includes the U.S. states of Connecticut, Massachusetts, Rhode Island, New Hampshire, Vermont, and Maine, and the Canadian provinces of Québec, Nova Scotia, New Brunswick, Prince Edward Island and Newfoundland and Labrador.

The Atlantic Northeast region is noted for its cultural unity, stark climate, landscape of dense forests, and a shared economic history in the exploitation of logging and the regional fishery. It is home to many different types of wildlife, sports teams, and geographical locations. The Atlantic Northeast is home to the Boston Celtics, Boston Bruins, New England Patriots, Halifax Hurricanes, Boston Red Sox and many more. It also includes many notable species including the Bald Eagle, Atlantic Salmon, and the Swamp Pink. Lastly, the Atlantic Northeast includes many geographical places of interest including the Northeast Canyons and Seamounts Marine National Monument and Salem, Massachusetts, home of the Salem Witch Trials.

Though cross-border connections are widely acknowledged, the area has rarely been given a single name. "Atlantic Northeast" is a term that has been used most prominently in discussions of regional folk culture, another name that is used is Atlantica." These names are often tied to various proposals for greater economic or political integration of the region.

The "Gray Zone" is an area of land and sea which is claimed by both Canada and the United States. It is located off the coasts of New Brunswick and Maine. The only land within this area are two islands, Machias Seal Island and North Rock. The "Gray Zone" is one of four areas between the two countries whose sovereignty is still in dispute, but is the only one of the disputed areas containing land. In 1979, both countries filed a joint application to the International Court of Justice to avoid having the dispute settled when oceanic boundaries in the area were set for mineral and fishing rights. Canadians have had a continuous presence in the area since 1832 when a lighthouse was built. [1]

Hartford, Connecticut has a population of approximately 123,243.

Providence, Rhode Island has a population of approximately 180,393.

Boston, Massachusetts has a population of approximately 685,095.

Montpelier, Vermont has a population of approximately 7,592.

Concord, New Hampshire has a population of approximately 42,620.

The Canadian Maritimes have a population of approximately 1,854,900.

Nova Scotia has a population of approximately 949,500.

Halifax, Nova Scotia, has a population of approximately 390,095.

New Brunswick has a population of approximately 756,800.

Fredericton, New Brunswick, has a population of approximately 56,224.

Prince Edward Island has a population of approximately 148,600. [3]

The Maritimes in the Atlantic Northeast

Northeast Canyons and Seamounts Marine National Monument is located 150 miles (240 km) off the shore of Cape Cod. The national monument comprises 4,900 square miles (13,000 km2) of underwater canyons carved into the continental shelf, and has an underwater mountain rising 7,000 feet (2,100 m) above the ocean floor. This monument is home to many marine species, fish, whales, and dolphins. The monument was formed by a declaration by President Barack Obama. [11]

Salem, Massachusetts, is a famous location in New England known primarily for the Salem witch trials. It was also one of Massachusetts wealthiest ports for trading in the late 18th century [10]

Acadia National Park is on Mount Desert Island in Maine, with 47,000 acres (19,000 ha) of woodlands, rocky shoreline, trails, camping, and wildlife. The park is home to Cadillac Mountain, the highest mountain on the east coast of the United States. [12]

According to archeologists, humans first settled in the Atlantic Northeast during the last ice age roughly 11,000 years ago. [14] The pro-dominate tribes in the Atlantic Northeast 11,000 years ago where the Wabanakis, Penobscots, and Mi'kmaqs. [14] These tribes mainly inhabited the soon to be Maritimes Provinces like Vermont, New Hampshire, and Massachusetts. Before 1620 the conflicts between Native American tribes and English settlers started due to the alienation of tribes, they also kidnapped members of the tribes through violence. [14] The violence among the Natives, French, and English confused the Native American tribes because they also traded with proper settlers but this left the tribes resentful of the European nations[ citation needed]. With the presence of the French and English in the Atlantic Northeast attracted the Dutch to begin trading on the hudson river with different tribes. The new presence of these traders also brought unwanted microbes, viruses, and bacteria that took heavy toll on the Native American population. [14] When smallpox swept the New England area in 1610 the Native American population hit an all-time low since they were trying to fight off a virus that was not indigenous to the area. Eventually the population recovered but not completely, after the outbreak settlers became highly interested in their beaver pelts which the Natives would trade for glass, metal, and weapons. [14]

During the period of the expulsion of the Acadians, thousands were deported from the present-day Canadian provinces of Nova Scotia, New Brunswick, Prince Edward Island, as well as from northern Maine — parts of an area known as Acadia — into the Thirteen Colonies, from 1755 until 1758. Large parts of Nova Scotia were subsequently resettled by new arrivals from New England before 1775. [15] At the end of the American Revolution, nearly 75,000 Loyalists resettled in Nova Scotia, New Brunswick and Québec. Close to 3,500 free African Americans went to Nova Scotia. Before 1860, about 30,000–40,000 black people entered Canada, many of them joined the previous group in Nova Scotia, either free or as escaped slaves through the Underground Railroad. [16] From the mid-19th century until the Great Depression in the 1930s, nearly 900,000 French Canadians emigrated from Québec to the U.S. Two-thirds went into New England mill towns. [17]

Halifax Citadel National Historic Site is the site of Fort George in the city of Halifax, Nova Scotia. Visitors can take tours of the fort, learning about its soldiers, its legends and ghost stories, and even become a soldier for the day. [19]

The Freedom Trail is a two and a half mile walking trail through the city of Boston that will take you past sixteen historic sites that led to the American Revolution including the Boston Common, the Park Street Church, the Granary Burying Ground, King's Chapel, the Old Corner Book Store, the Old State House, the site of the Boston Massacre, Faneuil Hall, the Paul Revere House, The Old North Church, the USS Constitution, and the Bunker Hill Monument. [20]

The Salem Witch Museum describes the history of the Salem witch trials of 1692 through life-size figures and narrations. [20]

The First Baptist Church in America was founded in Providence, Rhode Island in 1638 by William Vincent Carpenter and Roger Williams and later rebuilt in 1774. Guided tours are available from Memorial Day through Labor Day on weekdays, and self tours of the landmark are available all year round. [20]

The Lake Champlain Maritime Museum, open from May to October, houses historic schooners, steamboats, wooden boats, shipwrecks, and even a Revolutionary War gunboat replica. Visitors can learn about the history of the lake's role in commerce, communication, transportation, and war, as well as its natural history above and below sea level. [20]

New England economy shows continuous growth in the second quarter of 2016. The unemployment rate is 4.4 percent which is a .6 drop from last years census in 2015. From 2015 to 2016 the job that had the most growth in a year was construction. The manufacturing nationally decreased from two thousand fifteen to two thousand and sixteen but the New England area had a nice increase. [22]

Employment rate - Job growth in the New England states hit a growth rate of two point one percent which is an increase from last year.

Home prices have raised nationally and regionally year-over-year house prices have all been positively marked up. However Massachusetts had the best house price gains out of the whole New England area which was a 5.2 percent mark up. [22] 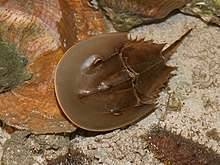 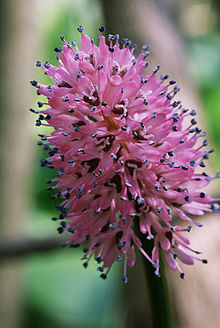