After the Westminster Confession was signed by its drafters in 1643, the "Covenanters," a Presbyterian group, left the Church of Scotland for the New World to avoid signing an oath to the monarch. These early believers seceded from the Church of Scotland over doctrinal differences. Some ministers stayed in the Church of Scotland to work out their differences. By 1739, a Scottish Presbyterian pastor Ebenezer Erskine led a group of ministers to leave the Church of Scotland who formed a separate group, the Seceders, which again opposed the main group and had doctrinal differences. Ebenezer Erskine and his brother Ralph Erskine preached sermons that later became the inspiration for the Associate Reformed Church in the American colonies. The monarch moved some of Ebenezer Erskine's followers to the northern Irish province of Ulster to quell religious disputes among Catholics and Protestants. These Ulster Scots Seceders and the Catholics continued to battle and some of the Scots later emigrated to the American colonies with Seceder ministers from Scotland in the mid-1700s. They settled with the Covenanters in Pennsylvania, New York, Ohio, Virginia, North Carolina, South Carolina, and Georgia.

Some churches of the Covenanter tradition and the Seceder tradition came together officially in Philadelphia, Pennsylvania, in 1782. The Synod of the South was formed consisting of churches in North and South Carolina and Georgia in 1803 and still another in Texas. Each tradition put aside doctrinal differences to come together as long as oath-signing to a central government could be avoided. The Northern Synod merged with the Associate Presbyterians in 1858 to form the United Presbyterian Church of North America.

The Associate Reformed Presbyterian Church of today traces its roots to the Synod of the South, formed in 1803 by the Rev. Mr. Lindsay, the Rev. Mr. Finney, Rev. Stafford Currie Millen, Dr. Pressly, Dr. Isaac Grier, Dr. Boyce, the Rev. Mr. McCutchen and a handful other early ARP ministers. Almost immediately after forming the Synod of the South, the ministers looked into forming a seminary closer to home for the education of the ministry and the growth of the church. Many of the ministers were traveling for more than thirty days on horseback to attend Synod meetings in the North. While they were gone, the churches and the congregations suffered in their absence. The solution they agreed to work towards was an academy called the Clarke and Erskine Seminary, which later became known as Erskine College and Seminary.

While the larger Presbyterian Church was a mix of Scottish and English Presbyterians, several smaller Presbyterian groups were almost entirely Scottish Seceders, and they displayed the process of assimilation into the broader American religious culture. Fisk (1968) traces the history of the Associate Reformed Church in the Old Northwest from its formation by a union of Associate and Reformed Presbyterians in 1782 to the merger of this body with the Seceder bodies to form the United Presbyterian Church in 1858. It became the Associate Reformed Synod of the West and remained centered in the Midwest. It withdrew from the parent body in 1820 because of Confessional disagreements regarding the administration of sacraments. [2] The Associate Reformed Synod of the West maintained the characteristics of an immigrant church with Scottish roots, emphasized the Westminster Standards, used only the Psalms in public worship, was Sabbatarian and was strongly abolitionist and anti-Catholic. In the 1850s however, it exhibited evidence of assimilation. It showed greater ecumenical interest, greater interest in the evangelization of the West and of the cities, and a declining interest in maintaining the unique characteristics of its Scotch-Irish past. [3]

In 2008, the ARPC had 39,681 members in 296 churches. [1] The denominational office is located in Greenville, South Carolina. Also, the denomination operates a conference center, Bonclarken, in Flat Rock, Henderson County, North Carolina. The conference center is surrounded by private property owners, many of whom trace their ARP roots to the beginnings of the denomination. Membership in the ARP Church is concentrated in the Southeastern United States, especially North Carolina and South Carolina. [4] There are also numerous congregations in Florida, Georgia, Tennessee, Mississippi, Arkansas, Missouri, and Virginia. [4] The ARPC has churches in Canada and in most states of the United States. Separate synods exist in Mexico and Pakistan. The ARP Church was among the first to send missionaries overseas to China as early as 1880. The ARP Church sponsors missionaries internationally through World Witness.

The ARP Church is affiliated with the North American Presbyterian and Reformed Council and shares a common theology with other conservative Presbyterian denominations. It holds to the infallibility and inerrancy of the Bible. The church does not ordain women as ministers or elders, though it does permit local sessions to determine whether to ordain women deacons. Having been originally formed by a merger of two denominations holding to exclusive psalmody, this was the practice of the ARP Church until 1946, when its synod allowed for the use of hymns other than the Psalms; each congregational session has right of discretion concerning the matter of music in worship. At the 207th General Synod, a new ARP psalter was approved for use in the denomination to encourage the increased use of Psalm singing in public worship.

In 1837 the church established an academy for men in Due West, S.C., which in 1839 became Erskine College, the first four-year church-related college in that state.

Erskine Theological Seminary, established as Clarke and Erskine Seminary in 1837, is the professional school of Erskine College; it was incorporated into Erskine College when the latter was founded two years later. The Seminary became a separate but associated school in 1858 and was reincorporated into the College in 1925. Erskine merged with the Due West Female College in the first decade of the 20th century. Erskine became the first private denominational school in South Carolina to allow women instructors at that time. Since its inception, Erskine has provided training for students of the ARPC as well as other denominations. Recent years, however, have witnessed ARP ministers graduating from other seminaries. 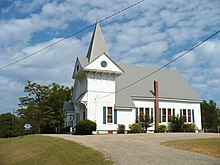 Along with other Presbyterian churches, the Associate Reformed Presbyterian Church uses the Westminster Confession of Faith, the Larger Catechism and the Shorter Catechism as subordinate standards. [5] In its 1990 Purpose Statement, the church declared that "we express our desire to continue to be a Presbyterian and Reformed church, committed to the Lordship of Jesus Christ and to the Bible as the Word of God." It listed some of its core commitments as:

The ARPC takes a conservative view of the Bible, officially stating that "the Bible alone, being God-breathed, is the Word of God written, infallible in all that it teaches, and inerrant in the original manuscripts." The Holy Spirit reveals through the text that "God the Father gave His Son to save us from our sins."

The Associate Reformed Presbyterian Church is a member of the World Reformed Fellowship, [7] and the North American Presbyterian and Reformed Council. [8] Membership in the International Conference of Reformed Churches was dropped in June 2011. [9]

The ARPC designates the Sunday nearest to January 22 as "Sanctity of Human Life Sunday," encouraging non-violent opposition to legalized abortion. [10] In addition, the denomination officially calls homosexuals "to repentance, cleansing, and deliverance in the saving power of Jesus Christ." [10]

The noted Southern writer Erskine Caldwell was the son of an ARP minister in Georgia.

Vann, Barry. "In Search of Ulster-Scots Land: The Birth and Geotheological Imagings of a Transatlantic People, 1603-1703", Columbia: University of South Carolina Press, 2008.