From Wikipedia, the free encyclopedia
A neighborhood in Dallas, Texas
Place in Texas, United States

The Arts District is a performing and visual arts district in downtown Dallas, Texas.

It is located south of State Thomas; southeast of Uptown; north of the City Center District; west of Bryan Place; and east of the West End Historic District. It is bounded by St. Paul Street, Ross Avenue, Spur 366 ( Woodall Rodgers Freeway), and the US 75/ I-45 (unsigned I-345) elevated freeway ( Central Expressway). (Previously the district extended east only to Routh Street, but a 9 March 2005 Dallas City Council approval extended it east to I-345.) [1] The Arts District is the founder and member of the Global Cultural Districts Network.

The district is 68  acres (0.28 km²) large and is home to some of Dallas’ most significant cultural landmarks including facilities for visual, performing, and developing arts.[ citation needed] 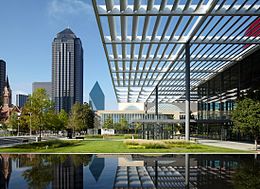 Pictured in the foreground is the Winspear Opera House with its reflecting pool and the Meyerson Symphony Center, both located within the Dallas Arts District.

In addition, multiple other organizations perform in the District on an ongoing basis. This includes everything from concerts to outdoor festivals, to lectures, youth education programs, and more. 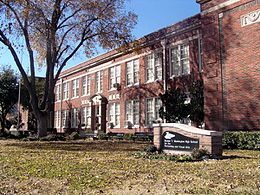 The Arts District is served by the Dallas Independent School District.

One school, the Booker T. Washington High School for the Performing and Visual Arts, is located in the Arts District.