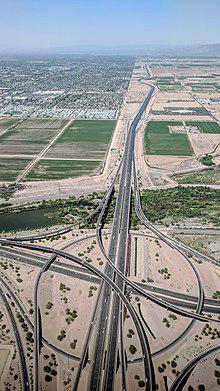 Interchange of 101 (Pima Freeway) with Loop 202 (Red Mountain Freeway) in Mesa, with 101 through Scottsdale in the distance

Arizona State Route 101 (commonly referred to as Loop 101) is a semi- beltway encompassing much of the Phoenix Metropolitan Area in the United States. It connects several suburbs of Phoenix, including Tolleson, Glendale, Peoria, Scottsdale, Mesa, Tempe, and Chandler. Construction began in the late-1980s and was completed in 2001. Additional general purpose lanes and a high occupancy vehicle lane (HOV) are being constructed along the eastern stretch of Loop 101 from Scottsdale to Chandler, starting at Princess Drive to Loop 202 (the Santan Freeway).

Loop 101 has various names along its route:

Continuing east as the Pima Freeway, it passes through the Union Hills area and then has an interchange with the northern terminus of SR 51 at milepost 29. East of its junction with SR 51, Loop 101 curves south through Scottsdale in the northeast valley on the Pima Road alignment. The freeway curves east and continues onto the Salt River Pima-Maricopa Indian Community just south of Via Linda providing access to Downtown Scottsdale, a large open-air power center called Scottsdale Pavilions, Scottsdale Community College, two casinos, and Scottsdale Fashion Square. Continuing south, Loop 101 encounters an interchange with the Red Mountain Freeway portion of Loop 202 in Tempe at milepost 51, near the campus of Arizona State University. This interchange is partially built over the Salt River.

After this interchange, Loop 101 is now the Price Freeway, and interchanges with US 60 at milepost 55 before entering Chandler. Loop 101 provides access to Chandler Fashion Center just prior to concluding at milepost 61 at an interchange with the Santan Freeway portion of Loop 202. [2]

Old colored Arizona Loop 101 shield that has been phased out.

The highway originally was assigned two different route numbers along its path. The Agua Fria Freeway portion was initially designated SR 417; [3] the section along the Pima/Price Freeways was to be SR 117. [4] A portion of Loop 101 between the Superstition Freeway and McDowell Road near Scottsdale had been proposed as the "Indian Bend Freeway" (SR 117) in 1962. [5] The Loop 101 designation was first assigned on December 18, 1987, at which time the South Mountain Freeway and the portion of the San Tan Freeway between I-10 and Price Road were also designated to be part of Loop 101. [6] On July 19, 1991, the proposed South Mountain Freeway was renumbered as part of Loop 202. [7] The San Tan Freeway portion of Loop 101 has never officially been renumbered, though this freeway section has been signed as Loop 202 since its opening.

An exit in Northeast Phoenix at 64th Street started construction in January 2008, and completed construction in the end of Q3 2008. [8] It was finally opened to traffic in May 2015. Construction of Freeway Management System (FMS) for this segment of Loop 101. Using sensors, freeway cameras and the latest technology, the Valley’s Intelligent Transportation Systems keep traffic flowing by providing incident management personnel with information about real-time traffic conditions. Construction was completed on the segment between I-17 and State Route 51 in September 2009.

In 1990, after several years of negotiation with the Salt River Pima Maricopa Indian Community, the state of Arizona paid the tribe $247 million for right of way for the eastern leg of Loop 101 from (north to south) south of Via Linda to the north bank of the Salt River. [9]

The resulting alignment kept all four corners of each interchange along the roughly 7-mile leg on tribal land, allowing the community to control and benefit from development. The tribe formed a development arm, Salt River DevCo, to manage these and other community developable properties. [10]

On August 26, 2010, comedian Robert Schimmel was involved in an accident on the road in Scottsdale in which his daughter was driving; their car flipped onto the side of the road. Schimmel died from his injuries on September 3, 2010. [11]

In 2006, Scottsdale installed speed enforcement cameras along its stretch of Loop 101 to combat the high fatality rate along its section of freeway. The photo enforcement was based on inductive sheeting on the freeway bed located at six fixed positions along the freeway - three in each direction. The photo enforcement was in a trial phase, with the trial ending in December 2006. In January 2007, the program was authorized by Arizona Governor Janet Napolitano to resume in February 2007. [12]

There had been much criticism of the program after its inception. For instance, in May 2006, a vehicle was allegedly clocked traveling at 147 miles per hour (237 km/h) on Loop 101. Scottsdale police arrested Lawrence Pargo soon afterwards. According to the manufacturer Hyundai, [13] the vehicle the suspect was driving had a centrifugal governor, and was only capable of traveling 137 mph (220 km/h). [14]

The system was calibrated to ticket anyone traveling 76 mph (122 km/h) or greater, as 65 mph (105 km/h) was the predetermined speed limit. The system was also designed for night time use and utilized equipment with a high intensity flash and full motion video capture to take pictures of fast-moving objects. [15]

Money from a typical $162 ticket went to the following:

The entire route is in Maricopa County.