Ariens Company, stylized as AriensCo, is a Wisconsin-based equipment company which has a long history manufacturing snow blowers, lawn tractors, and zero-turn lawn mowers for commercial and high-end consumer markets. [1] Ariens touts itself as being the "mower of the White House lawn," "official snow blower of Lambeau Field," and the "King of Snow".

Currently AriensCo dedicates its efforts for the residential lawn and snow markets using the Ariens brand name and dedicates its efforts for the commercial lawn market using the Gravely brand name. Ariens Company has branched into many product development projects over the course of its history. One of the most enduring and successful products has been the Ariens Sno-Thro.

Ariens Company entered the snow thrower market at the urging of an Ariens distributor in the Northeast who wanted a two-stage snow thrower for home snow removal. Product design began on December 15, 1959, and by March 1960, a prototype was complete. Test models were demonstrated to distributors throughout the Snowbelt. The company started production in July 1960, producing 1,865 units in the introductory season. These first units had issues with their drive systems and had to be replaced with a friction drive system, which is still in use today. The recall put great financial hardship on the company that year, but Ariens survived. 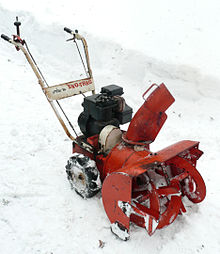 Tecumseh engines were used on 95% of Ariens machines from 1960 to 2009. A small percentage used Briggs & Stratton engines and others. In December 2008, Tecumseh began winding down production, and the 2009 model year was the last to receive Tecumseh engines. In 2010 Briggs & Stratton became the main supplier of engines for Ariens machines. A few years later, Liquid Combustion Technology of South Carolina (LCT) purchased the rights to the Tecumseh name and tooling and resumed building engines for snow machines. Base model machines were equipped with LCT engines and more advanced machines were powered by Briggs & Stratton. As of 2016, Ariens Sno-Thro machines are built in the United States, but all engines powering the machines are made in China (save for Briggs and Stratton engines). An electronic fuel injection engine was introduced for the 2017 model year.

Ariens entered the lawn and garden market in 1958 with its first riding lawn mower. In 1963 Ariens built and opened a 23,000 square foot manufacturing plant in Brillion, Wisconsin, to ramp up production. In 1977 Ariens built a new metal fabrication plant in Brillion, Wisconsin. Until 1982 Ariens had focused mainly on the residential mower market, but expanded into the commercial mower market through the acquisition of Gravely Company.

Ariens lawn tractors are generally characterized by independent left and right wheel drives. Ariens released an electric lawn mower in April 2009 through its dealer network and at Home Depot. [1] The mower runs for 75 minutes on a single charge. [1]

In 2014, Ariens purchased three direct marketing brands, Gempler's, AW Direct and Ben Meadows, to serve customers in niche professional markets. The brands operated as a single entity under Ariens Specialty Brands until 2018 when the company divested from them and eliminated the Ariens Specialty Brands division located in Janesville, Wisconsin. [2] [3]

The Ariens concept store, known as Brillion Power Equipment, opened on May 6, 2017. The store is located across the street from Ariens corporate headquarters and sells Ariens, Gravely and Stihl brands. [4]

The Ariens Company Museum is located at its original manufacturing plant in Brillion, Wisconsin. Opened in 2003, the museum displays highlights from the company's history and the evolution of the company's products, including tillers, tractors, riding mowers and snow throwers.