From Wikipedia, the free encyclopedia
Species of lizard which is the largest of the tegu lizards

The Argentine black and white tegu (Salvator merianae), also called commonly the Argentine giant tegu, the black and white tegu, the huge tegu, and in Spanish as the lagarto overo [1] is a species of lizard in the family Teiidae. The species is the largest of the " tegu lizards". [4] It is an omnivorous species which inhabits the tropical rain forests, savannas, and semi-deserts of eastern and central South America.

Tegus are sometimes kept as pets. They are notable for their unusually high intelligence and can also be house-broken. Like other reptiles, tegus go into brumation in autumn when the temperature drops. They exhibit a high level of activity during their wakeful period of the year.

Tegus fill ecological niches similar to those of monitor lizards, and are an example of convergent evolution.

The specific name, merianae, is in honor of German-born naturalist Maria Sibylla Merian. [5]

As hatchlings, Salvator merianae has an emerald green color from the tip of its snout to midway down its neck with black markings. The emerald green becomes black several months after shedding. As a young tegu, the tail is banded yellow and black; as it ages, the solid yellow bands nearest the body change to areas of weak speckling. Fewer solid bands indicates an older animal. A tegu can drop a section of its tail as a distraction if attacked. The tail is also used as a weapon to swipe at an aggressor; even a half-hearted swipe can leave a bruise.

Tegus are capable of running at high speeds and can run bipedally for short distances. They often use this method in territorial defense, with the mouth open and front legs held wide to look more threatening.

The skull is heavily built with a large facial process of the maxilla, a single premaxilla, paired nasals, a single frontal bone, and a single parietal bone. Biomechanical analyses suggest the posterior processes of the parietal might be important for dealing with torsional loads due to posterior biting on one side. [7] In the large adult animals, the posterior teeth are larger and more rounded than the anterior teeth. [8]

When a tegu reaches about 8 months old, which is commonly referred to as the beginning of their juvenile age, you can easily determine their sex on your own by sight. Their vent at the base of the tail will bulge when it is a male and lie flat as a female. Breeders generally can do such a thing by sight and feel, telling you before purchasing one, though if you have to make the assumption on your own, this is when you will start to notice the difference. If anything, you may always refer to their jowls. Adult males have substantially developed jowls, a result of hypertrophic lateral pterygoideus muscles. [9] Females' jawlines are more streamlined. 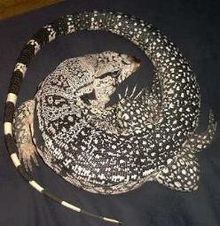 The blue tegu is a variant known for its light blue coloration, which is most intense in the adult males. Even immature animals can be easily distinguished from other mostly black and white tegu species by the "singe mark" on their nose. They are among the more suitable tegus for pets, and can be easily tamed but in the wild will either try to run away or react aggressively if provoked. There is much controversy about the correct scientific classification of this animal. Large-scale taxon sampling of the teiids has not led to any strong resolutions based on morphological and genetic data; [10] the majority of data about the blue tegu comes from hobbyists. Some believe it is a mutation of the Argentine black and white tegu, while others, including the original importer, [11] believe it is sufficiently different to have its own classification. The first blue tegu to be exported from South America was in a wholesale shipment of tegus from Colombia. [11]

The coloring of a blue tegu can range from a simple black and white animal to albino to a powder blue to even " platinum" which is basically a high white morph of the species. The blue coloration is typically most vivid on mature males and doesn't tend to appear until the animal reaches sexual maturity around the age of 18 months or 2 feet or more in size. Just like the Argentine black and white tegu, the blue tegu has a very quick growth rate, almost reaching 75% of its full length in a year. Their adult length can vary from 2.5 feet in females to sometimes even longer than 4 feet in adult males. Unlike other lizards these are very heavily built animals ranging from 7 to 12 pounds or more when fully grown. Size is relative to genetics as well as husbandry and diet.

Tegus are omnivorous. Juvenile tegus in the wild have been observed to eat a wide range of invertebrates, including insects, spiders, and snails. [16] They also eat fruits and seeds. As they grow they become more predatory and the protein content of their diet rises. They may seek out eggs from other reptiles and from birds' nests, and will eat small birds and other vertebrates. In adulthood tegus continue to eat insects and wild fruits, and it is assumed that such components include desirable or essential nutrients.

In captivity, tegus commonly are fed high protein diets that include raw or cooked flesh such as ground turkey, canned & dry dog food, commercial crocodile diet, chicken, eggs, insects, and small rodents. The inclusion of fruit in the diet is recommended. Though some captive tegus do not readily eat fruit, others enjoy banana, grapes, mango, and papaya. [17] However, there is evidence that, as in most husbandry of carnivores, it is good practice to cook most of the egg in the diet, so as to denature the protein avidin, that occurs in the albumen. Raw avidin immobilises biotin, so excessive feeding of raw eggs may cause fatal biotin deficiency. [18]

As adults, they have blunted teeth and exaggerated lateral pterygoidal muscles which allow them to be generalist feeders. In captivity, they have been observed eating various feeder insects like mealworms, superworms, earthworms, silkworms, crickets and roaches, as well as vertebrate prey like mice, rats, fish, turkey (offered in a ground form), rabbit, quail, and chicks. Crustaceans such as crayfish are also readily consumed. Like all lizards, blue tegus need a properly balanced diet; incomplete prey items such as insects or ground meat require dusting with a mineral/multi-vitamin supplement. Vitamin deficiencies can lead to trouble shedding skin, lethargy and weight loss; a calcium deficiency can lead to metabolic bone disease, which can be fatal. [19]

Predators of tegus are pumas, otters, jaguars, snakes, and birds of prey.

Tegus make amenable pets, as they tend to become acclimated to their owners and are generally quite docile as adults. They are intelligent and can even be house-broken. A healthy tegu can live for 15 to 20 years in the wild, and possibly even longer in captivity. However, as with most reptiles, if they are not handled regularly, they show more aggressive behaviour; their bite can be painful and damaging due to strong jaws (1000 N bite force, stronger than a dwarf caiman, partly due to the short, deep skull) and sharp incisor teeth in the upper jaw. Tegus do not produce venom. Tegus will perform a threat display if they are upset or stressed. The first stage is huffing, or very heavy breathing, which means "be careful".[ citation needed] Further interference causes the animal to start lashing its tail, somewhat like a moving snake. In wild animals, a third stage[ citation needed] of stamping the front feet or "dancing" is seen. If these hints are ignored, then the tegu can charge and may bite, which will require hospital/veterinary attention depending on the victim.[ citation needed]

To accommodate their size, a lone adult should be housed in nothing smaller than a 6'x3'x2' size cage, with the largest floor size possible. For a pair, you need to double that size. They must have tons of floor space. About six inches of substrate should be used to allow for burrowing, as well as a substrate that holds humidity well. Most owners use Cyprus Mulch mixed with Coconut Fiber, as it retains humidity extremely well, and is commercially available. Use only organic substrates, as anything with pesticides or additives, much like what you would commonly find at a hardware store, will cause many health issues with your tegu, including death. A good UVA and UVB bulb is imperative to keeping a tegu in good health. They need UVB to produce Vitamin D in their bodies, as well as metabolizing calcium. If they are not allowed exposure to UVB on a daily basis, they can experience severe pain and/or deformities from diseases such as Metabolic Bone Disease. Along with UV a blue tegu also needs a temperature gradient. This means that one side of the cage must be cooler, while the other is much warmer and provides a basking spot. This is so they can regulate their body temperature by going to whatever temperature works for them at the moment. Ambient temps on the cooler side should be around 75 degrees Fahrenheit (23C) and the warmer side should be about 90 degrees Fahrenheit (32C). They also need the surface of their basking spot to meet specific temperature requirements. As juveniles and younger, they need it around 100F (37C), though as they get older it can go up to 110F-120F (43C-48C). For healthy shedding a humidity of 60-80% is preferred.

Like most lizards, fresh water should be provided daily. Like other tegus you should make sure your tegu has enough water to soak in if they wish. Some tegus are also known to enjoy swimming and since they grow to about 1 meter long or more, a medium to large kitty litter box can be used as an appropriate sized water dish. Never allow water level to be above shoulder height for a tegu, as many tegus commonly drown when left without supervision.

Blue tegus, like other tegus, may breed up to twice a year. They only lay between 18 and 25 eggs in a ' clutch', sometimes more dependent upon animal size and husbandry as well as individual health of the gravid female. 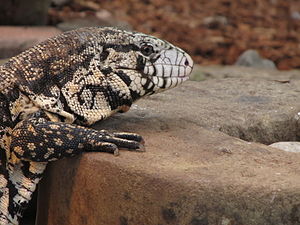 The two prominent loreal scales between the eye and nostril of this black and white tegu, plus its round pupil, identify it as belonging to the genus Salvator.

In 1839, this species of tegu was originally described as Salvator merianae. However, beginning in 1845 and continuing for 154 years, it was confused with Tupinambis teguixin, and was considered a synonym of that species. In 1995, it was again given species status as Tupinambis merianae because subsequent studies had shown that the gold tegu, Tupinambis teguixin, is distinct from it. In 2012, the black and white tegu was reassigned to the resurrected genus Salvator as Salvator merianae. [20]

S. merianae and T. teguixin can be distinguished by skin texture and scale count: