From Wikipedia, the free encyclopedia
(Redirected from Archdiocese of Atlanta)

The Archdiocese of Atlanta is an archdiocese of the Catholic Church in the U.S. state of Georgia. [1] Its ecclesiastical territory comprises Georgia's northern counties, including the capital of Atlanta. [1] It is led by a prelate archbishop, [1] who is also pastor of the mother church, the Cathedral of Christ the King in Atlanta. [1] The Cathedral is the metropolitan see of the Catholic Ecclesiastical Province of Atlanta, which covers Georgia, [1] South Carolina, and North Carolina. As of 2014, there were 100 parishes and missions in the Archdiocese. [2] There were 900,000 registered Catholics in the Archdiocese as of 2010. [3] 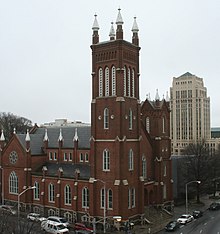 Shrine of the Immaculate Conception in Downtown Atlanta, whose pastor convinced Sherman not to burn the city's churches

The former Diocese of Atlanta was established by a division of the Diocese of Savannah-Atlanta on July 2, 1956. [1] At that time, there were also two designated co-cathedrals, including St. John the Baptist in Savannah and Christ the King in Atlanta. [1]

The Diocese of Atlanta was elevated to the rank of archdiocese on February 10, 1962. [1]

In 1966, the Archdiocese was home to the youngest bishop in the nation, Joseph Bernardin. Ordained an auxiliary bishop [1] at the age of 38, Bernardin [1] later became Archbishop of Cincinnati and ultimately the Archbishop of Chicago and cardinal.

In 1988, Eugene Antonio Marino [1] was named Archbishop of Atlanta, [1], becoming the first African American archbishop in the United States. [1] He resigned from his position two years later after his affair – termed an "inappropriate relationship" [1] by the Archdiocese – with a lay minister became public knowledge. After a period of reflection and renewal, [1] he continued on in religious service in New York State until his death. [1]

In December 2004, Pope John Paul II appointed Wilton Gregory as Archbishop of the Archdiocese of Atlanta, [6] and he was installed in January 2005. [6]

On April 4, 2019, the Vatican appointed Archbishop Wilton Gregory to the Archbishop of Washington, DC. [11] As such, there was no Archbishop of Atlanta, and the see was vacant, with Auxiliary Bishop Joel Konzenisa serving as the diocesan administrator since his election to that post by the College of Consultors on May 24, 2019, once Archbishop Gregory had been installed in Washington three days prior on May 21. [12] 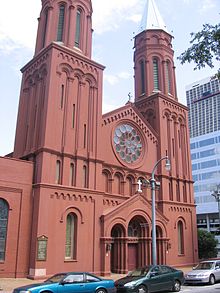 The following is a list of the Roman Catholic bishops and archbishops who have served as the diocesan bishop of Atlanta (and their tenures of service):

Other priests in this archdiocese who became bishops

See also: List of schools in the Roman Catholic Archdiocese of Atlanta

The Georgia Bulletin, the official newspaper of the Archdiocese, was established in 1963 and is published weekly (except for the second and last weeks of June, July, August, as well as the last week of December). [20]