The Ana G. Méndez University (UAGM) is a private university system with its main campus in San Juan, Puerto Rico.

The Ana G. Méndez University system has campuses in the following cities in Puerto Rico and mainland United States.

On January 2, 2019 the institution announced that the Universidad Metropolitana, Universidad del Turabo and Universidad del Este would cease to exist as independent entities of each other and would join to become the Ana G. Mendez University System. [11] 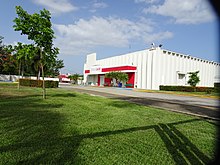 The University has libraries available for the use of students as well as a virtual library where books and useful information is readily available or easily requested for specific researches or projects. The main library includes a computer room, studying areas, conference rooms, and the library itself. There is a library-museum named after the former governor of Puerto Rico, Pedro Rosselló, as " Biblioteca Museo Dr. Pedro Rosselló", which includes a museum, library, studying area, and an auditorium. There is also a main museum with a center for humanistic studies named " Dra. Josefina Camacho de la Nuez" and the entrance is free of charge.

University of Turabo (now the Gurabo campus) was established in 1972. [12] In 1974 it earned accreditation from the Middle States Association of Colleges and Schools and the Puerto Rico Higher Education Council.

In 2004, it began the doctoral program in Environmental Sciences and the advent of the Strategic Plan for Scientific Research. Today, enrollment exceeds 15,000 students of which over 450 are doctoral level.[ citation needed]

In 2018, the National Science Foundation announced a partnership between the University of Turabo and the Cornell High Energy Synchrotron Source at Cornell University (CHESS). [13]

The Metropolitan University —or Universidad Metropolitana (UMET) in Spanish— is a private, non-profit, and secular university system in Puerto Rico which is now part of the Ana G. Mendez University. It has five campuses: 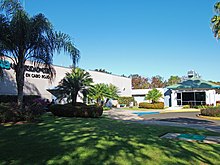 In 2013, the United States army noted that graduates of the University of Turabo often become leaders in the US army. [14]