Amethyst is a violet variety of quartz. The name comes from the Koine Greek αμέθυστος amethystos from α- a-, "not" and μεθύσκω (Ancient Greek) methysko / μεθώ metho (Modern Greek), "intoxicate", a reference to the belief that the stone protected its owner from drunkenness. [1] The ancient Greeks wore amethyst and carved drinking vessels from it in the belief that it would prevent intoxication.

Amethyst is a semiprecious stone that is often used in jewelry and is the traditional birthstone for February. 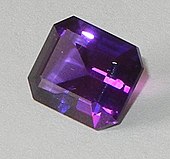 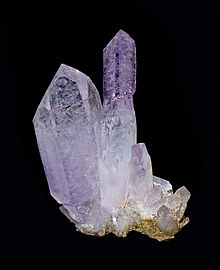 Amethyst is a purple variety of quartz (SiO2) and owes its violet color to irradiation, impurities of iron and in some cases other transition metals, and the presence of other trace elements, which result in complex crystal lattice substitutions. [2] [3] [4] The hardness of the mineral is the same as quartz, thus making it suitable for use in jewelry.

Amethyst occurs in primary hues from a light pinkish violet color to a deep purple color. Amethyst may exhibit one or both secondary hues, red and blue. [5] High quality amethyst can be found in Siberia, Sri Lanka, Brazil, Uruguay, and the far East. The ideal grade is called "Deep Siberian" and has a primary purple hue of around 75–80%, with 15–20% blue and (depending on the light source) red secondary hues. [6] ‘Rose de France’ is defined by its markedly light shade of the purple, reminiscent of a lavender/ lilac shade. These pale colors were once considered undesirable but have recently become popular due to intensive marketing.

Green quartz is sometimes incorrectly called green amethyst, which is a misnomer and not an appropriate name for the material, the proper terminology being prasiolite. Other names for green quartz are vermarine or lime citrine.

Of very variable intensity, the color of amethyst is often laid out in stripes parallel to the final faces of the crystal. One aspect in the art of lapidary involves correctly cutting the stone to place the color in a way that makes the tone of the finished gem homogeneous. Often, the fact that sometimes only a thin surface layer of violet color is present in the stone or that the color is not homogeneous makes for a difficult cutting. It can even cut crystal quartz, which is one of Earth’s sharpest gems.

The color of amethyst has been demonstrated to result from substitution by irradiation of trivalent iron (Fe3+) for silicon in the structure, [4] [7] in the presence of trace elements of large ionic radius, [3] and, to a certain extent, the amethyst color can naturally result from displacement of transition elements even if the iron concentration is low. Natural amethyst is dichroic in reddish violet and bluish violet, [4] but when heated, turns yellow-orange, yellow-brown, or dark brownish and may resemble citrine, [8] but loses its dichroism, unlike genuine citrine. When partially heated, amethyst can result in ametrine.

Amethyst can fade in tone if overexposed to light sources and can be artificially darkened with adequate irradiation. [4] It does not fluoresce under either short-wave or long-wave UV light.

An amethyst geode that formed when large crystals grew in open spaces inside the rock.

Amethyst is produced in abundance from the state of Rio Grande do Sul in Brazil where it occurs in large geodes within volcanic rocks. [9] [10] [11] [12] [13]Many of the hollow agates of southwestern Brazil and Uruguay contain a crop of amethyst crystals in the interior. Artigas, Uruguay and neighboring Brazilian state Rio Grande do Sul are large world producers exceeding in quantity Minas Gerais, as well as Mato Grosso, Espirito Santo, Bahia, and Ceará states, all amethyst producers of importance in Brazil. 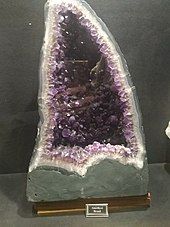 Amethyst from Brazil in the Mineral museum in India

It is also found and mined in South Korea. The largest opencast amethyst vein in the world is in Maissau, Lower Austria. Much fine amethyst comes from Russia, especially from near Mursinka in the Ekaterinburg district, where it occurs in drusy cavities in granitic rocks. Many localities in south India yield amethyst. [1] One of the largest global amethyst producers is Zambia in southern Africa with an annual production of about 1000 tons.

Amethyst occurs at many localities in the United States. Among these may be mentioned: the Mazatzal Mountain region in Gila and Maricopa Counties, Arizona; Red Feather Lakes, near Fort Collins, Colorado; Amethyst Mountain, Texas; Yellowstone National Park; Delaware County, Pennsylvania; Haywood County, North Carolina; Deer Hill and Stow, Maine and in the Lake Superior region of Minnesota, Wisconsin and Michigan. [1] Amethyst is relatively common in the Canadian provinces of Ontario and Nova Scotia. The largest amethyst mine in North America is located in Thunder Bay, Ontario.

Amethyst is the official state gemstone of South Carolina. Several South Carolina amethysts are on display at the Smithsonian Museum of Natural History. [14] 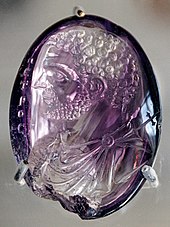 Roman intaglio engraved gem of Caracalla in amethyst, once in the Treasury of Sainte-Chapelle. 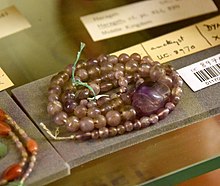 Uninscribed amethyst scarab at the center of a string of amethyst ball beads. Middle Kingdom. From Egypt. The Petrie Museum of Egyptian Archaeology, London

Amethyst was used as a gemstone by the ancient Egyptians and was largely employed in antiquity for intaglio engraved gems. [15]

The Greeks believed amethyst gems could prevent intoxication, [16] while medieval European soldiers wore amethyst amulets as protection in battle in the belief that amethysts heal people and keep them cool-headed. [17] Beads of amethyst were found in Anglo-Saxon graves in England. [18] Anglican bishops wear an episcopal ring often set with an amethyst, an allusion to the description of the Apostles as "not drunk" at Pentecost in Acts 2:15. [19]

A large geode, or "amethyst-grotto", from near Santa Cruz in southern Brazil was presented at a 1902 exhibition in Düsseldorf, Germany. [1]

In the 19th century, the color of amethyst was attributed to the presence of manganese. However, since it can be greatly altered and even discharged by heat, the color was believed by some authorities to be from an organic source. Ferric thiocyanate has been suggested, and sulfur was said to have been detected in the mineral. [1]

Synthetic (laboratory-grown) amethyst is produced by a synthesis method called hydrothermal growth, which grows the crystals inside a high-pressure autoclave.

Synthetic amethyst is made to imitate the best quality amethyst. Its chemical and physical properties are the same as that of natural amethyst and it can not be differentiated with absolute certainty without advanced gemmological testing (which is often cost-prohibitive). One test based on "Brazil law twinning" (a form of quartz twinning where right and left hand quartz structures are combined in a single crystal [20]) can be used to identify most synthetic amethyst rather easily. It is possible to synthesize twinned amethyst, but this type is not available in large quantities in the market. [6]

Single-crystal quartz is very desirable in the industry, particularly for keeping the regular vibrations necessary for quartz movements in watches and clocks, which is where a lot of synthetic quartz is used.

Treated amethyst is produced by gamma ray, X-ray or electron beam irradiation of clear quartz ( rock crystal) which has been first doped with ferric impurities. Exposure to heat partially cancels the irradiation effects and amethyst generally becomes yellow or even green. Much of the citrine, cairngorm, or yellow quartz of jewelry is said to be merely "burnt amethyst". [1] [21]

The Greek word "amethystos" may be translated as "not drunken", from Greek a-, "not" + methustos, "intoxicated". Amethyst was considered to be a strong antidote against drunkenness, [22] which is why wine goblets were often carved from it. [23] In his poem "L'Amethyste, ou les Amours de Bacchus et d'Amethyste" (Amethyst or the loves of Bacchus and Amethyste), the French poet Remy Belleau (1528–1577) invented a myth in which Bacchus, the god of intoxication, of wine, and grapes was pursuing a maiden named Amethyste, who refused his affections. Amethyste prayed to the gods to remain chaste, a prayer which the chaste goddess Diana answered, transforming her into a white stone. Humbled by Amethyste's desire to remain chaste, Bacchus poured wine over the stone as an offering, dyeing the crystals purple. [24] [25]

Variations of the story include that Dionysus had been insulted by a mortal and swore to slay the next mortal who crossed his path, creating fierce tigers to carry out his wrath. The mortal turned out to be a beautiful young woman, Amethystos, who was on her way to pay tribute to Artemis. Her life was spared by Artemis, who transformed the maiden into a statue of pure crystalline quartz to protect her from the brutal claws. Dionysus wept tears of wine in remorse for his action at the sight of the beautiful statue. The god's tears then stained the quartz purple. [26]

This myth and its variations are not found in classical sources. However, the titan Rhea does present Dionysus with an amethyst stone to preserve the wine-drinker's sanity in historical text. [27]

Up until the 18th century, amethyst was included in the cardinal, or most valuable, gemstones (along with diamond, sapphire, ruby, and emerald). However, since the discovery of extensive deposits in locations such as Brazil, it has lost most of its value.

The highest-grade amethyst (called "Deep Russian") is exceptionally rare and therefore, when one is found, its value is dependent on the demand of collectors. It is, however, still orders of magnitude cheaper than the highest-grade sapphires or rubies. [6]