The church was chartered in 1927 by Metropolitan Platon (Rozhdestvensky) of New York and led by Aftimios Ofiesh before his suspension and deposition in 1933. [3] [4] [5] The purpose of the American Orthodox Catholic Church was to establish a new tradition in North America separate from any other particular ethnic or cultural traditions. [4] [6] It operated in the United States of America with initial support from the Russian Orthodox Greek Catholic Church (today the Orthodox Church in America), until Ofiesh suspected autocephaly. [4] In 1929, the Ukrainian Orthodox Church of the USA ( Ecumenical Patriarchate) schismed from the American Orthodox Catholic Church. [7] [8] 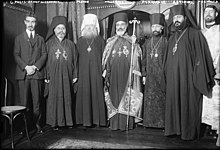 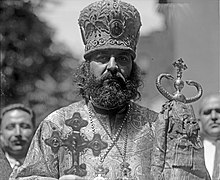 The establishment of the church inspired a reactionary movement against it, especially from the Russian Orthodox Church Outside Russia (ROCOR). Although the ROGCC severed ties with ROCOR in 1926, [11] the ROCOR still viewed itself as the ROGCC's rightful canonical authority. Aftimios replied forcefully, denouncing the Russian Orthodox Church Outside Russia for their actions and forbade his clergy and faithful from having anything to do with them. [12] Like his estranged former associates in ROCOR, ROGCC Metropolitan Platon turned his back on the American Orthodox Catholic Church out of perceived lack of loyalty. [13] However, others began to doubt Platon's support of the new church primarily because of publications in the Orthodox Catholic Review (edited by Hieromonk Boris and Priest Michael) that were aimed at the Episcopal Church USA. [1] [14] [13]

To worsen matters, the Greek Orthodox Church of Antioch sent Archbishop Victor (Abo-Assaley) of New York to America in 1924, [15] where he encouraged Orthodox Arabs to come under Antiochian jurisdiction rather than under the Russians or the new American Church. [3] Despite his efforts, he did not make much headway in his endeavors.

To counteract Archbishop Victor's actions, Aftimios and his group began to focus on the establishment of the church's legal status. For a while, the American Orthodox Catholic Church enjoyed some success. In May 1928, Sophronios (Beshara) was consecrated as Bishop of Los Angeles. [16] He was given responsibility for all territory west of the Mississippi River and for parishes who still considered themselves to be under the jurisdiction of the Russian Orthodox Greek Catholic Church. [12] However, the success did not last. It was expected that with three bishops, they would achieve a solid foundation, but this did not happen.

In 1929, Aftimios attempted to gain Greek Archbishop Alexander Demoglou of Rodostolou's support for the new church. [17] Demoglou was the first primate of the newly formed Greek Orthodox Archdiocese of America. His response was that he had authority over not only all of the Greek Orthodox in America, but also over all Orthodox Christians in America. Aftimios ordained Reverend Demetrius Cassis, an American of Greek parentage, for the new American Church. [12]

In The Quest for Orthodox Church Unity in America, Fr. Serafim believes that Aftimios's opposition to the new church had shifted from reservation to optimism. Fr. Serafim claims this shift in Aftimios's emotions because of a letter dated October 4, 1929 where Aftimios declared that:

Undoubtedly, Aftimios wrote the letter assuming that Platon had already given him authority over all Orthodox Christians in North America. [18] Fr. Serafim continues by saying that Aftimios's denunciation of Platon's authority barely affected the Russian parishes or their clergy. The reason for Aftimios's denunciation was that Platon would continue to rule the archdiocese until a bishop was sent to relieve him, even though the Ukaz of Patriarch Tikhon suspended Platon. [12]

The announcement of Aftimios's authority had a negative effect on some members of the American Orthodox Catholic Church. Two weeks after it became public, Bp. Emmanuel (Abo-Hatab) requested canonical release from Aftimios, who gave it reluctantly. [19] He went over to Platon and tried to bring Syrian parishes away from Aftimios and back under the ROGCC. [20] Despite these troubles, Aftimios continued to explore new opportunities. He began negotiations to bring Bp. Fan (Noli) to serve as a bishop in the new American Church, with jurisdiction over Albanian Orthodox Christians. Though Bp. Fan did eventually come to the United States, it was under the auspices of the ROGCC. [21] Aftimios continued his attempts to boost the legitimacy of his jurisdiction.

Around October 1930 Aftimios sent a letter to his clergy indicating that they ought to keep their distance from Bp. Germanos (Shehadi) of Zahle who had come from Antioch, without the Antiochian Church's authorization, to gather funds from Arabic Orthodox parishes and to encourage such parishes to come under Antioch's jurisdiction. [22] While in the U.S., Bp. Germanos accepted Archpriest Basil Kherbawi under his omophorion. Kherbawi had previously been suspended by Abp. Aftimios for disloyalty.

In 1932, Aftimios's cathedral was taken from him and given over to the ROGCC by a decision of a New York State court. The charter stated that the cathedral could only be used by a hierarch subject to the authority of the Russian Church.[ citation needed] Nevertheless, Aftimios consecrated two more bishops, Ignatius ((W.A.) Nichols, a former Episcopal cleric who had become an Old Catholic episcopus vagans), and Joseph (Zuk) of New Jersey. Zuk had ties to the Ukrainians, who had the allegiance of a half dozen parishes. [8]

Aftimios's discouragement over the state of his jurisdiction is believed the cause to make the decision that is known to the Eastern Orthodox Church as the death-knell for the American Orthodox Catholic Church: [6]

"...on the 29th of April 1933 Abp Aftimios, in defiance of all Orthodox Tradition and Canon Law... married in a civil ceremony to a young Evangelical Syrian girl born in America [she was actually a member of the Syrian Orthodox parish in Wilkes-Barre, Pennsylvania]—and despite all the efforts of responsible parties, he refused to resign as Archbishop of the new Church." [12]:41

The two new bishops of the church, Ignatius and Joseph, voiced their support of Aftimios's marriage. [23] [24] In previous traditions and cultures, bishops were not allowed to marry, but since the new church is separate from any other particular ethnic or cultural traditions, they acknowledged Aftimios's decision as courageous. [12] Three days after Aftimios's wedding, Ignatius and Joseph held a synod meeting by themselves. During the meeting, they elected Joseph as the new President Archbishop of the American Orthodox Catholic Church. Since they believed that Aftimios had resigned, Ignatius was designated his successor. Fr. Serafim observes that these leadership complications eventually undermined any authority the church may have still had. Fr. Andrew Stephen Damick largely blames the multiple consecrations by Ignatius as another complication. [25] By the summer of 1933, only six parishes remained in the American Orthodox Catholic Church. [12] 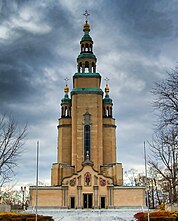 St. Andrew Memorial Church in South Bound Brook, New Jersey — headquarters of the Ukrainian Orthodox Church of the USA which schismed from the AOCC

Joseph later denied making the agreement that Ignatius would be his successor. His denial was not very significant because he was already sick. Joseph died soon after, on February 23, 1934. [12] Ignatius then got married in June 1933 and began forming ecumenical relations with the representatives of the Living Church in America. The Living Church had been competing with the ROGCC and ROCOR. He eventually broke relations with the Living Church and returned to being an episcopus vagans. Before his death, Joseph started multiple small religious bodies, many of whom claim apostolic succession from him. He became the first bishop of the Ukrainian Orthodox Church of the USA and died as the pastor of a small community church in Middle Springs, Vermont. [26]

The only bishop left to the American Orthodox Catholic Church was Sophronios (Beshara), who then appealed to Platon for assistance. He had also intended to contact Emmanuel Abo-Hatab, but Emmanuel died on May 29, 1933. Despite his challenges, Bp. Sophronius embraced his new position as 'President Locum Tenens of the American Holy Synod.' Bp. Sophronius hoped to use his new position to mend relations with Metr. Platon and to be viewed as an equal authority within the Church. [12]:42

By this point, Platon was focused on the arrival of the representative of the Patriarchate from Russia, Bp. Benjamin Fedchenkov of Saratov. Fedchenkov's purpose in the United States was to investigate the ecclesiastical status of Orthodox America. [27] Due to the new church's lack of support, the remaining priests and parishes joined other authorities or became members of the Independent Sacramental Movement. Hieromonk Boris and Priest Michael were received back into the authority of Moscow and the ROGCC.

Later, in 1933, Sophronios officially removed and suspended Aftimios in October and deposed Ignatius in November. Sophronios still refused to submit to Platon or the Moscow Patriarchate. [12] The American Orthodox Catholic Church in its original form ended when Sophronios died in 1934 in Los Angeles. Fr. Serafim gives the date of his death as 1934, but his gravestone reads 1940. He is now buried at the Antiochian Village in Pennsylvania alongside St. Raphael of Brooklyn and Emmanuel (Abo-Hatab). [12]