From Wikipedia, the free encyclopedia
(Redirected from American Eagle Airlines)
American airline based in Texas

Envoy Air Inc. (formerly American Eagle Airlines) is an air carrier headquartered in Irving, Texas, in the Dallas-Fort Worth metroplex. It is a wholly owned subsidiary of American Airlines Group that, along with several carriers outside the group, feeds the American Airlines route network under the American Eagle brand. [6] With over 1000 flights a day, serving 150 cities across the United States, Canada, Mexico and the Caribbean, [6] Envoy is considered to be one of the world's largest regional airline systems. [7] Envoy is an affiliate member of the Oneworld airline alliance.

The name "American Eagle Airlines" was also used between April 1980 and April 1981 by an unrelated air charter service that suspended operations and filed bankruptcy before flying any scheduled operations. [8]

Envoy began as a collection of regional carriers with contracts to carry the American Eagle brand name. The first American Eagle flight was operated by Metroflight Airlines, which was a wholly owned subsidiary of Metro Airlines (formerly Houston Metro Airlines), on November 1, 1984, from Fayetteville, Arkansas and Fort Smith, Arkansas, to Dallas/Fort Worth International Airport. Metroflight utilized Convair 580 turboprop aircraft that had been formerly operated by Frontier Airlines. Other carriers that have flown in American Eagle livery include Executive Airlines, Command Airways, Air Virginia, Simmons Airlines, Chaparral Airlines and Wings West Airlines. Among other aircraft in its fleet, Chaparral flew Grumman I-C turboprops which were stretched, 37 passenger regional airliner versions of Grumman's successful propjet business aircraft and was one of only a few air carriers to ever operate the type in scheduled passenger service.

Until 1987 these third-party carriers flew under contract with American Airlines to provide regional feed to its hubs. During 1987 and 1988 AMR Corp. acquired its regional carriers, starting with Simmons Airlines. AMR's final airline d/b/a American Eagle acquisition was Executive Airlines in 1989. [9]

During 2007, AMR began studying ways to spin American Eagle Airlines off into a separate company, including, but not limited to, the possibilities of selling the company to either stockholders or to an unaffiliated third party. In 2008, AMR said any plans had been put on hold until the airline industry stabilized after the worldwide financial crisis. In July 2011, AMR announced the spin-off of American Eagle Airlines but those plans were again put on hold when Parent AMR Corp. filed for bankruptcy in November 2011. In 2014 the company changed its name to Envoy Air Inc., but American Eagle continues to live on as a brand, as well as livery for Envoy-operated and third party-operated regional flights.

On January 14, 2014, American Airlines Group officially announced the rebranding of its American Eagle subsidiary as Envoy. Aircraft operated by American Eagle continued to operate under the current American Eagle branding, but an "Operated by Envoy Air" label was added, similar to the label used by other contract airlines that fly aircraft with American Eagle livery. [19] This name change was created to avoid confusion when American Airlines announced that other regional carriers would operate on behalf of American. The term 'Envoy' is a reincarnation of the now deprecated Envoy Class of seating on US Airways aircraft. [20] 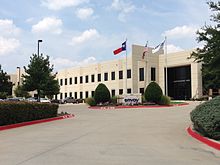 The headquarters is in Irving, Texas, [21] in two buildings located north of the northeast portion of DFW Airport. [22]

American Eagle was previously headquartered at the American Airlines headquarters in Fort Worth, Texas and had employees in several buildings: HDQ1, HDQ2, the Systems Operations Control (SOC) center, the DFW American Eagle hangar, the DFW-area warehouse CP-28, Flight Academy, and the Flagship University. It was scheduled to consolidate operations and move 600 employees; from the headquarters, SOC, and training divisions; into the Irving offices in July 2014; they were formerly occupied by Epsilon. [22]

Codeshare agreements with other airlines

Until April 11, 2012, the carrier also had a codeshare agreement with Delta Air Lines on California routes.[ citation needed]

There were previously bases in Boston, Los Angeles, Nashville, Raleigh/Durham, and San Juan.

In September 2009, AMR Corporation announced plans to add a First Class cabin to its fleet of 25 Bombardier CRJ-700 regional jets and also signed a letter of intent with Bombardier, Inc. to exercise options for the purchase of 22 additional CRJ-700 aircraft for delivery beginning in the middle of 2010. [29]

In January 2014, American Eagle's pilots' union reached an agreement with the regional carrier's management that guaranteed 60 of the 90 new Embraer E175 aircraft that American Airlines ordered in December were to be operated by Eagle. The deal included options for 90 other aircraft to be operated by the regional carrier. Delivery of the aircraft would begin in the first quarter of 2015. This deal was voted down by the pilots' union, the Air Line Pilots Association (ALPA).

In October 2016, Envoy announced that they had taken delivery of two additional Embraer E175 aircraft.

In November 2018, Envoy announced that they had taken delivery of an additional fifteen Embraer E175 aircraft totaling 84 by mid-2020.

In December 2019, Envoy transferred all of the remaining Bombardier CRJ-700 aircraft to PSA Airlines.

In March 2020, it was announced that all twenty of the Embraer E175 aircraft operated by Compass Airlines would be transferred to Envoy upon their closure in April 2020. Currently stored at Tucson-Marana Regional Airport awaiting transfer as of 22 April 2020.

The American Eagle brand operated a variety of twin turboprop aircraft over the years via its various regional and commuter airline partners, including the ATR 42 and ATR 72; Beechcraft Model 99; British Aerospace Jetstream 31 and 32 models; CASA C-212 Aviocar; Convair 580; Fairchild Swearingen Metroliner; Grumman Gulfstream I (stretched G-IC model); NAMC YS-11; Short 330 and Short 360; and the Saab 340. Piedmont Airlines (wholly owned by US Airways at the time of its merger with AA) operates a fleet of de Havilland Canada DHC-8 turboprop aircraft as American Eagle. The -100 variety was retired in November 2017. The -300 variety was retired in July 2018.