Aloha Stadium is a multi-purpose stadium located in Halawa, Hawaii, a western suburb of Honolulu (though with a Honolulu address). It is the largest stadium in the state of Hawaii. Aloha Stadium is home to the University of Hawaiʻi Rainbow Warriors football team ( Mountain West Conference, NCAA Division I FBS).

It hosts the NCAA's Hawaiʻi Bowl (2002–present) and Hula Bowl (restarting in 2020, [8] previously hosted 1975–1997 and 2006–2008), and formerly was home to the National Football League's Pro Bowl from 1980 through 2016 (except in 2010 and 2015). It also hosts numerous high school football games during the season, and serves as a venue for large concerts and events, including high school graduation ceremonies. A swap meet in the stadium's parking lot every Wednesday, Saturday and Sunday draws large crowds. [9]

Aloha Stadium was home field for the AAA Hawaii Islanders of the Pacific Coast League (PCL) from 1975 to 1987, before the team moved to Colorado Springs.

Before 1975, Honolulu's main outdoor stadium had been Honolulu Stadium, a wooden stadium on King Street. However, it had reached the end of its useful life by the 1960s, and was well below the standards for Triple-A baseball. The need for a new stadium was hastened by the Rainbows' move to NCAA Division I. Located west of downtown Honolulu and 2 miles (3.2 km) north of Honolulu International Airport, Aloha Stadium was constructed in 1975 at a cost of $37 million. The baseball field is aligned north-northwest (home plate to centerfield), as is the football field.

The stadium was somewhat problematic for its initial primary tenant, the baseball Islanders. Located in west-central Oahu, it was far from the team's fan base, and many were unwilling to make the drive. Additionally, while TheBus stopped at the main gate of Honolulu Stadium, the stop for Aloha Stadium was located some distance from the gate. As a result, attendance plummeted and never really recovered—a major factor in the franchise's ultimate move to the mainland. [11]

Additionally, stadium management initially refused to allow the use of metal spikes on the AstroTurf in May 1976. When the Tacoma Twins complied with a parent-club directive to wear the spikes, stadium management turned off the center field lights. After 35 minutes, the umpires forfeited the game to the Twins. The Islanders protested, claiming they had no control over the lights. However, the PCL sided with the Twins, citing a league rule that the home team is responsible for providing acceptable playing facilities. [11] [12] The teams ended the season in a tie for first in the Western Division and Hawaii won the one-game playoff in Tacoma.

As originally built, Aloha Stadium had various configurations for different sport venues and other purposes. Four movable 7,000-seat sections, each 3.5 million pounds (1,600,000 kg) [1] could move using air casters into a diamond configuration for baseball (also used for soccer), an oval for football, or a triangle for concerts. In January 2007, the stadium was permanently locked into its football configuration due to cost and maintenance issues. [13] An engineer from Rolair Systems, the NASA spin-off company that engineered the system, [14] claims that the problem was caused by a concrete contractor that ignored specifications for the concrete pads under the stadium. [15]

There have been numerous discussions with Hawaii lawmakers who are concerned with the physical condition of the stadium. There are several issues regarding rusting of the facility, several hundred seats that need to be replaced, and restroom facilities that need to be expanded to accommodate more patrons. [3] Much of the rust is due to building the stadium with weathering steel. It was intended to create a protective patina that would eliminate the need for painting. However, the designers reckoned without Honolulu's ocean-salt laden climate. As a result, the steel has never stopped rusting.

A 2005 study by Honolulu engineering firm Wiss, Janney, Elstner Associates, Inc. determined that the stadium required $99 million to be completely restored and an additional $115 million for ongoing maintenance and refurbishment over the next 20 years to extend its useful life. [16] In early 2007, the state legislature proposed to spend $300 million to build a new facility as opposed to spending approximately $216 million to extend the life of Aloha Stadium for another 20–30 years. The new stadium may also be used to attempt to lure a Super Bowl to Hawaii in the future. [17]

One council member has said that if immediate repairs are not made within the next seven years, then the stadium will probably have to be demolished due to safety concerns. In May 2007, the state allotted $12.4 million to be used towards removing corrosion and rust from the structure. [18]

In 2003, the stadium surface was changed from AstroTurf (which had been in place since the stadium opened) to FieldTurf. [2] In July 2011, the field was replaced with an Act Global UBU Sports Speed S5-M synthetic turf system.

In 2008, the state of Hawaii approved the bill of $185 million to refurbish the aging Aloha Stadium. [19] In 2010, Aloha Stadium completely retrofitted its scoreboard and video screen to be more up to date with its high definition capability. The Aloha Stadium Authority plans to add more luxury suites, replacing all seats, rusting treatments, parking lots, more restrooms, pedestrian bridge supports, enclosed lounge, and more. There is also a proposal that would close the 4 openings in the corners of the stadium to add more seats.

In early 2017, there was a study in the Honolulu Star-Advertiser about replacing Aloha Stadium due to safety concerns and a liability risk. The plan is to build a smaller 30,000 seat stadium on the existing property and also build commercial development around the stadium. In theory, it would save the state millions of dollars instead of renovating and keep the existing stadium as it is. [22] [23]

In July 2019, Hawaii Gov. David Ige signed Act 268 into law, appropriating $350 million for an Aloha Stadium redevelopment project. The funds will go toward the construction of a new stadium and land development, including a mixed-use sports and entertainment complex. [24] 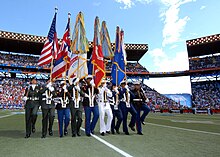 In 1975, Aloha Stadium was home to the World Football League's Hawaiians. The San Francisco 49ers and the San Diego Chargers played an NFL preseason game at Aloha Stadium on August 21, 1976.

In August 2019, the NFL returned to Aloha Stadium with a preseason game between the Los Angeles Rams and Dallas Cowboys. [25]

In 1997, a three-game regular season series between Major League Baseball's St. Louis Cardinals and San Diego Padres was held at the stadium. [26] The series was played as a doubleheader on April 19 and a nationally broadcast ( ESPN) game on April 20. In 1975, the Padres had played an exhibition series against the Seibu Lions of Japan's Pacific League.

The United States women's national soccer team was scheduled play a game against Trinidad and Tobago as part of their World Cup Winning Victory Tour at the stadium on December 6, 2015; however, the game was canceled the day before gameday due to concerns over the turf being unsafe to play on. [28]

In June, the Brisbane Broncos from the Australasian-based National Rugby League (NRL) competition organized for a rugby league match to be played at Aloha Stadium against NRL rivals Penrith Panthers later in 2015. [30] However, in September the NRL blocked the idea and the game didn't go ahead. [31]

A proposed Major League Rugby team, Kanaloa Hawai’i is planned to be based at Aloha Stadium. [32] [33]