From Wikipedia, the free encyclopedia
Airline of the United States

Aloha Airlines was formed in 1946 and expanded over the next few decades. It filed for Chapter 11 bankruptcy protection in the United States Bankruptcy Court for the District of Hawaii in 2004 in an attempt to cut costs and remain competitive with other airlines serving Hawaii. Following approval of new labor contracts and securing additional investment from new investors, the airline emerged from bankruptcy protection on February 17, 2006. The airline filed for Chapter 11 bankruptcy protection again on March 20, 2008. [5] Ten days later, on March 30, 2008, Aloha Airlines announced the suspension of all scheduled passenger flights, with the final day of operation to be March 31, 2008. [6]

After the shutdown of passenger operations, Aloha and its creditors sought to auction off its profitable cargo and contract services division. Several companies expressed interest in purchasing Aloha's cargo division, including Seattle-based Saltchuk Resources, California-based Castle & Cooke Aviation, and Hawaii-based Kahala Capital (which included Richard Ing, a minority investor in the Aloha Air Group and member of Aloha's board of directors). [7] However, a disagreement between cargo division bidders and Aloha's primary lender, GMAC Commercial Finance, ended with the bidders dropping out of the auction. [8] Almost immediately afterwards, GMAC halted all funding to Aloha's cargo division, forcing all cargo operations to cease; at the same time, Aloha's board of directors decided to convert its Chapter 11 bankruptcy reorganization filing into a Chapter 7 bankruptcy liquidation. [8] [9] 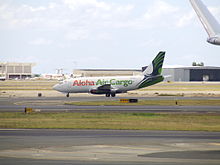 Saltchuk Resources decided to renew its bid to purchase the cargo division at the urging of U.S. Senator Daniel Inouye, and a deal between Aloha and Saltchuk was struck and approved by the federal bankruptcy court, where Saltchuk would purchase the cargo division for $10.5 million. [10] The sale was approved by federal Bankruptcy Judge Lloyd King on May 12, 2008, with the sale expected to close two days later. [11]

On May 15, 2008 the airline received its FAA and Department of Transport authority to operate as an independent airline. The airline went through a big transformation in the first two years of operation. The airline's first president, Mike Malik, rebranded the airline; launched a host of new products and services; and established "Aloha Tech Ops", the MRO division. During this time the airline won numerous awards and was named Hawaii's Cargo Airline of the year for 2008. [12]

The Aloha Air Cargo fleet consists of the following aircraft (as of August 2016): [13]

The airline fleet previously included the following aircraft (as of June 2014): [15]