Abigail Williams is an American black metal band, originally from Phoenix, Arizona, but now based in Olympia, Washington. Since their formation in 2004, the group has suffered near-constant changes to their line-up. The band even disbanded in 2007 for a short time before reforming and writing their debut full-length album. Shortly after an eight-week tour in support of their debut full-length album In the Shadow of a Thousand Suns (2008), vocalist Ken Sorceron would become the only original member remaining.

The band was formed in 2004 by guitarist Ken Bergeron, [1] who later became the vocalist. Prior to forming Abigail Williams and taking on the name Sorceron, Bergeron was the guitarist of Victims In Ecstacy, [2] followed by participation in various hardcore and metal acts in Arizona. [3]

Abigail Williams' first songs were six demo tracks that were streamed online with a sound described by the band as having "the groove and melody of Gothenburg style death metal, the face smashing breakdowns of the hardcore scene, topped with the bombastic and epic approach favored by the frostbitten black metal hordes". [4] These demo songs were later packaged by a fan into a bootleg named Gallow Hill. Three of these demo tracks would be re-recorded for the Legend EP, including "Melquiades (The Great Work)", which was re-titled "The Conqueror Wyrm" and "Swollen Disgust", which was released as "Like Carrion Birds". [5]

After touring extensively, including a United Kingdom tour in 2006, the band had their debut release through Candlelight Records, which was the Legend EP in 2006, which mixed metalcore influences with symphonic black metal, and was described by Allmusic as "a perfect example of an American recording with a very Nordic-influenced sound". [6] [7] [8] According to vocalist/guitarist Ken Sorceron, the EP was only released so that the band would have something to promote, explaining "a lot of the songs are, like, older songs, and they felt a bit old. At the time we were trying to make an album and we just couldn't finish it on time for some tours". [8] After touring with Dark Funeral and Enslaved, the band split up in early 2007, although Sorceron later claimed that rather than a permanent split it was a pre-meditated hiatus. [8] Sorceron and Wilson continued playing together in another band, and eventually asked the original Abigail Williams bassist Thomas G. Plaguehammer to join them on drums. They decided to resume Abigail Williams as a band, with Plaguehammer returning to bass, Zach Gibson and Bjorn Dannov rejoining, and also Kristen Randall ( Winds of Plague) joining the band. [6] After a tour in late 2007, their drummer and keyboard player left, with Ashley Ellylon rejoining on keyboards and Samus becoming the new permanent drummer. [6]

The band went into the studio with producer James Murphy (former guitarist of Obituary, Testament, and Cancer) to record their debut album, In the Shadow of a Thousand Suns, released in October 2008, on which the metalcore influences that the band had on their previous songs was completely abandoned. The sound of the debut album has even drawn comparisons to Dimmu Borgir and Cradle of Filth. [6] [9] Much of its inspiration came from the melodic metal scene found in the Nordic countries. [10] Because bands from these countries were immersed in the mythology of their respective countries, Abigail Williams looked into American history. Arthur Miller's The Crucible brought Abigail Williams, one of the original and foremost accusers in the Salem witch trials of 1692, to their attention.

"The accuser is always relevant in society. In America there were the witch trials, the Red Scare, and now terrorism. Everyone is always quick to point a finger; we do it out of fear, prejudice, and because of things we don’t understand. So, the accuser will always be present in society. Abigail Williams really stuck out to us, not only due to the above mentioned, but also because it possessed that iconic quality, while still sounding very American. We want people to know where we are from, and that even though it may not be cool/trendy, we are proud of our American culture."

The influence of European metal, particularly Scandinavian, is again evident. [11] The album took more than six months to record, and black metal drummer Trym Torson of Emperor and Enslaved played drums on all tracks on the album except "Floods", "Acolytes", and "Empyrean". [6] [12] [13] Most of the songs were written by Sorceron while the band was on hiatus in 2007. [13] The band toured Europe and the UK in summer 2008. In 2009, keyboardist Ashley Ellylon became the new keyboardist for Cradle of Filth, replacing Rosie Smith. In October 2009, Sam "Samus" Paulicelli also left to focus on other projects.

Abigail Williams released the deluxe edition of In the Shadow of a Thousand Suns on January 12, 2010, which included a second disc featuring four new songs, one unreleased demo of "Floods," and the music video for "Into the Ashes". [14]

Abigail Williams released their second full-length album, called In the Absence of Light, via Candlelight Records on September 28, 2010. The album shows a considerable difference from the rest of the band's discography, noting its pure black metal sound instead of symphonic black metal. [15]

The band began work on a new album in the summer of 2011, titled Becoming, which was released on January 24, 2012 through Candlelight Records. It was the band's third full-length album through the label as well as their final album in all. Frontman, Sorceron handled all production aspects of the album. [16] Before its release, the song "Ascension Sickness" leaked early on November 10, 2011 onto YouTube. [17]

On July 2, 2012 Abigail Williams announced that this year's US tour would be the last ever and that they are disbanding. [18] Since this, however, they have stated that they plan on recording another studio album along with further tour dates.

On August 25, 2015 Abigail Williams announced their forthcoming album titled The Accuser via their Facebook page. The Accuser features eight tracks and was released on Oct 30, 2015. [19] 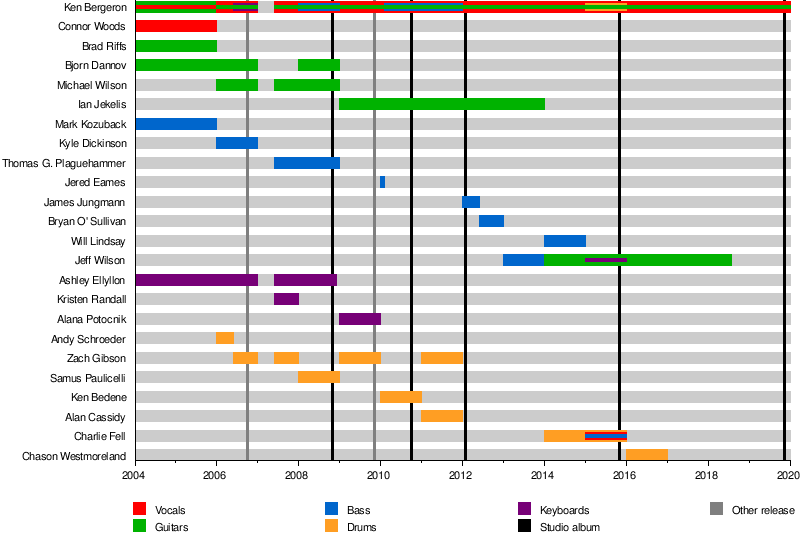