AT&T Stadium, formerly Cowboys Stadium, is a retractable roof stadium in Arlington, Texas, United States. It serves as the home of the Dallas Cowboys of the National Football League (NFL) and was completed on May 27, 2009. It is also the home of the Cotton Bowl Classic and the Big 12 Championship Game. The facility, owned by the city of Arlington, can also be used for a variety of other activities such as concerts, basketball games, soccer, college and high school football contests, rodeos and motocross and Spartan races. It replaced the partially covered Texas Stadium, which served as the Cowboys' home from 1971 through the 2008 season.

The stadium is sometimes referred to as "Jerry World" after Dallas Cowboys owner Jerry Jones, who originally envisioned it as a large entertainment mecca. [16] The stadium seats 80,000, [5] making it the fourth largest stadium in the NFL by seating capacity. The maximum capacity of the stadium with standing room is 105,000. [17] The record attendance for an NFL game was set in 2009 with a crowd of 105,121. [18] The Party Pass (open areas) sections are behind seats in each end zone and on a series of six elevated platforms connected by stairways. [17] [19] It also has the world's 29th largest high definition video screen, which hangs from 20-yard line to 20-yard line. [20]

Originally estimated at $650 million, the stadium's actual construction cost rose to $1.15 billion, [21] making it one of the most expensive sports venues ever built. To aid Cowboys owner and general manager, Jerry Jones, in paying the construction costs of the new stadium, Arlington voters approved the increase of the city's sales tax by 0.5%, the hotel occupancy tax by 2%, and car rental tax by 5%. The City of Arlington provided over $325 million (including interest) in bonds as funding, [21] [22] and Jones covered any cost overruns. Also, the NFL provided the Cowboys with an additional $150 million loan, following its policy for facilitating financing for the construction of new stadiums. [23]

A pair of nearly 300 ft (91 m)-tall arches spans the length of the stadium dome, anchored to the ground at each end. The new stadium also includes "more than 3,000 Sony LCD displays throughout the luxury suites, concourses, concession areas and more, offering fans viewing options that extend beyond the action on the field". [24] It also houses a center-hung Mitsubishi video display board that was the largest HDTV screen in the world at the time of their installation. [25] It has since been surpassed in size by the Panasonic "Big Hoss" video board (218 feet (66 m) wide and 94.6 feet (28.8 m) tall) at Texas Motor Speedway. [26] Glass doors, allowing each end zone to be opened, were designed and constructed by Dallas-based Haley-Greer glass systems.

The retractable roof was designed by structural engineering firm Walter P Moore and the systems were implemented by mechanization consultants Uni-Systems. The electrification of Cowboys Stadium's retractable roof was developed by VAHLE, Inc. [27] These Kinetic Architecture fundamentals will be employed in order to create quick conversions of the facility to accommodate a variety of events. When the design was officially unveiled on December 12, 2006, it showed that, from inside the stadium, the roof (membrane installed by K Post Company of Dallas) [28] will look very similar to the Texas Stadium roof, with its trademark hole. However, it can be covered by the retractable roof panel to protect against the elements.

The football turf field was built by Hellas Construction. They developed a special SoftTop Convertible Turf System that has 26 interchangeable panels to allow the stadium to host a variety of events from concerts, dirt bike and monster truck rallies to college football, basketball, and soccer games. [29]

A Dallas Cowboys Hall of Fame is planned for the Hall of Fame level. The drawings also include a site for a large sculpture northeast of the stadium, close to Randol Mill Road. Mayor Robert Cluck claimed to use eminent domain as a last resort but most of the properties refused to sell to the city, indicating that the incentive program was not adequate according to Glenn Sodd, an attorney representing some home owners in the area. Attorney Bob Cohen, who is representing some of the property owners, said the city gave many of his clients little incentive to sell. He said he represents the owners of some rental properties who were counting on that monthly revenue for their retirement and said most homeowners cannot afford to re-build or buy in that area with the incentive package. [30] An Arlington attorney was quoted as saying “The mayor sold out and the council went right along”. [31]

It is claimed that the stadium uses more electricity than the whole country of Liberia. [32] 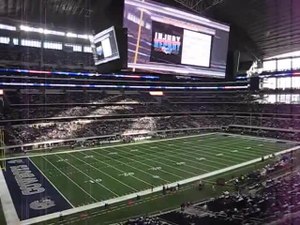 Play media
Video of inside the stadium

Although the stadium had yet to sell naming rights, many fans started referring to the project with various nicknames such as "Jerry World", [39] [49] [50] the " Death Star", [51] "The Palace in Dallas" (for which announcer Bob Costas was criticized by the Arlington mayor [52]), "Cowboys Cathedral", [53] "Jerrassic Park" and others. [54] There was also a petition by some fans to have the stadium named after longtime Cowboys' coach Tom Landry.

On July 25, 2013, Jerry Jones announced that the Dallas Cowboys had agreed to grant naming rights to AT&T. The name change from Cowboys Stadium to AT&T Stadium took effect immediately. [55] The sponsorship deal was reported to be worth about $17–19 million per year. [56] Facility Solutions Group installed the "AT&T Stadium" letters on the top of the stadium. Signage includes two sets of letters 43 feet (13 m) tall stretching 385 feet (117 m). The letters are made of lightweight components and aluminum and are insulated and heated to melt ice and snow. [57]

This is AT&T's third major sports venue where it holds the naming rights. The others are AT&T Center in San Antonio, and Jones AT&T Stadium in Lubbock.

Guinness World Records was on hand at the September 28, 2009 game against the Carolina Panthers to award certificates to the Chairman of Mitsubishi Electric and Dallas Cowboys owner Jerry Jones for the World's Largest HD Video Display. [25] For basketball events played in Cowboys Stadium, such as the 2010 NBA All-Star Game, the video board is actually larger than the court. It has since been surpassed in size by the video boards at TIAA Bank Field.

During the debut preseason game of Cowboys Stadium on August 21, 2009, a punt by Tennessee Titans punter A. J. Trapasso hit the 175 feet (58 yd) wide screen above the field. The punt deflected backwards and was ruled in-play until Titans coach Jeff Fisher informed the officials that the punt struck the scoreboard. By rule, the down was replayed. Jerry Jones believes that Trapasso was trying to hit the scoreboard, saying, "If you look at how you punt the football, unless you're trying to hit the scoreboard, you punt the ball to get downfield. You certainly want to get some hangtime, but you punt the ball to get downfield, and you sure don't punt the ball down the middle. You punt it off to the side." [58] Whether the screen would affect an opposing team's punting strategy has been debated. For teams with strategies centered on maximizing hang-time, physicist Christopher Moore of Longwood University has shown via computer simulation that well-kicked punts have the potential to hit the screen no matter the field position. [59] Trapasso disputed Jones' suggestion that he was intentionally trying to hit the board, and other NFL punters have suggested that the board may pose a problem for longer hang-time punts. The screen was retrofitted with 16 custom winches using 11,000 feet (3,400 m) of 1.5 inches (3.8 cm) domestic galvanized wire rope to transport the video board in time to make room for U2's massive set during their 360° Tour, and was moved back down after the concert.[ citation needed] The video board is also the primary attachment point for up to 370,000 pounds (170,000 kg) of concert and theatrical rigging.[ citation needed]

On August 24, 2013, Cowboys punter Chris Jones became the second player to hit the scoreboard. He conceded a touchdown on the re-kick. [60]

On February 14, 2010, the stadium hosted the 2010 NBA All-Star Game. With an announced crowd of 108,713, the game became the highest-attended basketball game in history, setting a new Guinness World Record. The East squad prevailed with a 141–139 victory over the West. [61]

Cowboys playing at the stadium 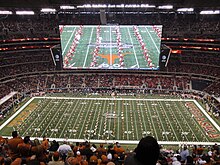 University of Texas marching band during the Big 12 Championship game

AT&T Stadium, then known as Cowboys Stadium, was the site of the 2009 and 2010 Big 12 Championship Games, the last two held prior to the 2010–13 Big 12 Conference realignment. On December 5, 2009, the Texas Longhorns defeated the Nebraska Cornhuskers 13–12 in the 2009 Big 12 Championship Game, the first to be held in the stadium with attendance announced at 76,211. [67] The following year, on December 4, 2010, the Oklahoma Sooners and Nebraska Cornhuskers rekindled their rivalry as the Sooners won 23–20 in the final Big 12 Championship game until the 2017 season. The stadium was scheduled to host the games through the 2013 season, but the realignment of the Big 12 Conference to 10 teams meant they were not allowed to host a championship game because of NCAA rules requiring conferences to have at least 12 teams divided into two divisions in order to stage a championship game. [68] [69]

The Arkansas Razorbacks vs. Texas A&M Aggies football rivalry, which began in 1903, was renewed in 2009 as the Southwest Classic, and was played at Cowboys Stadium from 2009 through 2011. In 2012, Texas A&M joined Arkansas in the Southeastern Conference, and the series reverted to the schools' home fields, Kyle Field in College Station, Texas for the 2012 game and Donald W. Reynolds Razorback Stadium in Fayetteville, Arkansas in 2013. The Southwest Classic returned to AT&T Stadium in 2014 and will remain there through at least 2020.

In 2009, the Big 12 Conference game between the Baylor Bears and Texas Tech Red Raiders was held at Cowboys Stadium, the first time in the series the match-up was held on a neutral site. The game was the highest attended in the series' history, with 71,964 in attendance. [75]

After the 2010 game was held at the Cotton Bowl in Fair Park, Dallas during the State Fair of Texas, the series returned to AT&T Stadium for the 2011 and 2012 games. The series' neutral site contract at AT&T Stadium could continue until 2014. [76] 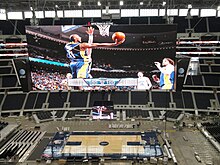 The stadium being set up for Texas vs. North Carolina game

The stadium has hosted three world championship boxing fights since its opening, as the large capacity and retractable roof make it an ideal venue for boxing events throughout the year. Two of the sports biggest stars in Manny Pacquiao and Saul "Canelo" Álvarez have headlined championship bouts there, with top level boxing set to return on March 16, 2019 when unbeaten champions Errol Spence Jr. and Mikey Garcia square off for the IBF Welterweight Championship.

AT&T Stadium has hosted a round of the AMA Supercross Championship since 2010, replacing Texas Stadium which had been host since 1975. [83] 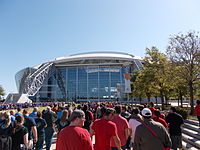 The fees for premium parking at Dallas Cowboys games are estimated at $75 per game, based on season ticket holder parking charges. [109] The fees to park at major concerts and other sporting events will be nearly $40 per space at the new stadium. [110] A shuttle operates between the T&P Station and AT&T Stadium for all Cowboys regular season and postseason games and selected college football games, [111] which averages approximately 900 riders per game. [111] For special events like Super Bowl XLV parking prices can increase to as much as $990. [112]

The stadium was only accessible via the Metro Arlington Xpress (MAX) bus system; a 0.4 mi (0.64 km) walk from the Collins and Andrews stop which connected with the Trinity Rail Express (TRE) station at CentrePort/DFW Airport. The bus system was an experimental program which commenced in April 2013 and was replaced by a ride-sharing service in December 2017.