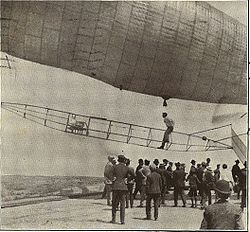 Postcard image from 1905, captioned Knabenshue and his air ship

Roy Knabenshue on a dirigible, approximately 1905

He was born on July 15, 1875, in Lancaster, Ohio, the son of Salome Matlack and Samuel S. Knabenshue. Samuel Knabenshue, an educator and political writer for the Toledo Blade for many years, served as U.S. consul in Belfast, Ireland, from 1905 to 1909 and as consul general in Tianjin, China, from 1909 to 1914. [2] In 1904, at the Louisiana Purchase Exposition, Roy Knabenshue piloted Thomas Scott Baldwin's California Arrow dirigible to a height of 2,000 feet (610 m) and was able to return to the takeoff point. [3]

He was the first to make a dirigible flight over New York City in 1905. [4] In 1913 he built the first passenger dirigible in America: White City.

He performed barnstorming and worked as the general manager of the Wright Exhibition Team. From 1933 to 1944 he worked for the National Park Service and then worked for a Los Angeles, California, firm reconditioning used aircraft.

Interment and services were held March 9, 1960, at the Portal of the Folded Wings in Valhalla Memorial Park Cemetery in North Hollywood, California.