8 Spruce Street, previously known as the Beekman Tower and New York by Gehry, [4] is a 76-story skyscraper designed by architect Frank Gehry at 8 Spruce Street in the Financial District of Manhattan, New York City.

8 Spruce Street is one of the tallest residential towers in the world, and it was the tallest residential tower in the Western Hemisphere at the time of opening in February 2011. [5] The building was developed by Forest City Ratner, designed by Frank Gehry Architects and WSP Cantor Seinuk Structural Engineers, and constructed by Kreisler Borg Florman. It contains a public elementary school owned by the Department of Education. [6] Above that and grade-level retail, the tower contains only residential rental units. The skyscraper's structural frame is made of reinforced concrete, and form-wise it falls within the architectural style of Deconstructivism along with Aqua, a skyscraper in Chicago begun after but completed before 8 Spruce. 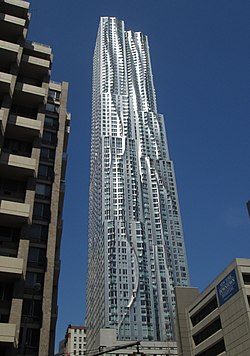 As seen from Gold Street

Above the elementary school is a 904-unit [10] luxury residential tower clad in stainless steel. The apartments range from 500 square feet (46 m2) to 1,600 square feet (150 m2), and consist of studios, one-, two- and three-bedroom units. All units are priced at market-rate, with no low or moderate income-restricted apartments. [11] All units are rental-only; none are available for purchase. [5]

The building originally included space for New York Downtown Hospital next door. [5] The hospital was allocated 25,000 square feet (2,300 m2), of parking below ground. It was never used. As of 2016, it is a commercially-operated valet parking garage.

Early reviews of 8 Spruce Street have been favorable. In The New York Times, architecture critic Nicolai Ouroussoff praised the building's design as a welcome addition to the skyline of New York, calling it: "the finest skyscraper to rise in New York since Eero Saarinen's CBS Building went up 46 years ago". [15] New Yorker magazine's Paul Goldberger described it as "one of the most beautiful towers downtown". Comparing Gehry's tower to the nearby Woolworth Building, completed in 1913, Goldberger said, "It is the first thing built downtown since then that actually deserves to stand beside it." [16]

CityRealty architecture critic Carter Horsely hailed the project, saying "the building would have been an unquestioned architectural masterpiece if the south façade had continued the crinkling and if the base had continued the stainless-steel cladding. Even so, it is as majestic as its cross-town rival, the great neo-Gothic Woolworth Building designed by Cass Gilbert at 233 Broadway on the other side of City Hall Park." [17] Gehry designed both the exterior, interiors and amenities spaces, along with all 20 model apartments.

The building received the Emporis Skyscraper Award for 2011. [18]