From Wikipedia, the free encyclopedia
This article is about the legally defined voting ward. For the New Orleans neighborhood, see Seventh Ward, New Orleans. 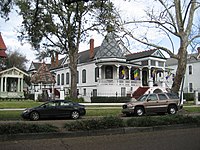 House on the 7th Ward side of Esplanade Avenue

The London Avenue Canal runs through the ward from just in from Gentilly Ridge to the Lake. Dillard University is in the Ward, as is most of the University of New Orleans campus near the lakefront. The New Orleans Fairgrounds, home to horse racing and the New Orleans Jazz & Heritage Festival, is just back from Esplanade Avenue, as is Saint Louis Cemetery #3. Frenchmen Street, the popular destination for food and live music, is in the front of the ward near the French Quarter.

As with most of New Orleans, the area along the high ground of the riverfront was developed first; this area is today the Marigny Triangle of the Faubourg Marigny. The Pontchartrain Railroad, the first US railroad away from the Atlantic coast, ran for a century along Elysian Fields between the Riverfront and the famous camps at Milneburg. The area is known for the Creole citizens who once heavily populated the area. Esplanade Ridge between Rampart and Bayou St. John was one of the first parts of town substantially developed away from the riverfront. Some of the elegant early 19th century Creole-style mansions can still be seen along Esplanade. The areas between Gentilly Ridge and the Lakefront was developed in the 20th century with improved drainage; see Drainage in New Orleans. 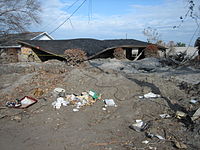 When Hurricane Katrina struck New Orleans in 2005, the effects were disastrous. The London Avenue Canal breached catastrophically on both sides, flooding the majority of the Ward and the surrounding area. The 7th ward has since seen many residents return.