4 World Trade Center (also known by its street address, 150 Greenwich Street) is a skyscraper that is part of the World Trade Center complex in New York City. It is located on the southeast corner of the 16-acre (6.5 ha) World Trade Center site, where the original nine-story 4 World Trade Center stood. Pritzker Prize-winning architect Fumihiko Maki was awarded the contract to design the 978-foot-tall (298 m) building. [8] It houses the headquarters of the Port Authority of New York and New Jersey (PANYNJ). [9]

The building's groundbreaking took place in January 2008, and it opened to tenants and the public on November 13, 2013. [10] As of 2016 [update], it is the third tallest skyscraper at the rebuilt World Trade Center, behind One and 3 World Trade Center. However, 2 World Trade Center is expected to surpass the height of both 3 and 4 WTC upon completion. [11] The total floor space of the building includes 1.8 million square feet (167,000 square meters) of office and retail space. [12]

The original 4 World Trade Center was a 9-story low-rise office building completed in 1977 that was 118 ft (36 m) tall, and located in the southeast corner of the World Trade Center site. The first tenants moved into the building in January 1977. [13] The building's major tenants were Deutsche Bank (Floor 4, 5, and 6) and the New York Board of Trade (Floors 7, 8, and 9). The building's side facing Liberty Street housed the entrance to The Mall at the World Trade Center on the basement concourse level of the WTC. It was practically destroyed as a result of the collapse of the South Tower during the September 11 attacks and its remains were later demolished to make way for the construction of the new skyscrapers: 4 World Trade Center and 3 World Trade Center. 4 World Trade Center was home to five commodities exchanges on what was at the time one of the world's largest trading floors (featured in the Eddie Murphy movie Trading Places). Following the destruction of the building during 9/11, rescuers and surveyors exploring the building's basement discovered large amounts of gold and silver bullion in the vault; a sizeable amount of coins that had been stored there by the Bank of Nova Scotia were purchased in 2002 as cleanup efforts began by Lee S. Minshull of California, who then submitted the coins to PCGS for grading; these coins bear unique labels on their holders, and have since entered the hands of collectors. [14]

Groundbreaking took place in 2008. The building reached street level in November 2009. The safety cocoon was installed December 2010. The first glass was installed May 2011. In November 2010, three PureCell fuel cells were delivered at the World Trade Center site which together will provide about 30% of the tower's power. [16] The structural engineer for the building is Leslie E. Robertson Associates, New York City. [17]

On February 16, 2012, one of the building's construction crane cables snapped while lifting steel, causing the steel to fall 40 stories from the building, landing on a flat bed truck. No injuries were reported. Construction on the building eventually resumed after the accident. [18] 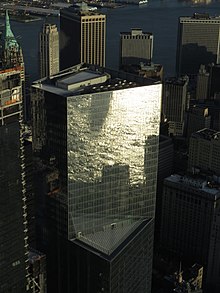 4 World Trade Center reflecting water of the Hudson River, viewed from One World Observatory in 2017

The above-ground portion of the building dedicated for retail use (which consists of the ground floor, the three floors immediately above the ground floor as well as the two floors below ground), accommodates offices using two distinct floor shapes. From floors 7 through 46, the typical floor space is 36,350 square feet (3,376 square meters) in the shape of a parallelogram (which is designed to echo the configuration of the site). [11] From floors 48 through 63 the floor space is 28,000 sq ft (2,600 square meters) in the shape of a trapezoid, shaped so that it opens toward the tip of Manhattan Island and also triangulated to face One World Trade Center. The tower includes five levels of mechanical floors. [11] The New York Power Authority selected UTC Power to provide 12 PureCell Model 400 fuel cells that will be used to provide electricity, water and heat. According to the developer, the systems combined will rank as one of the largest installations of fuel cells in the world. [16] The upper floors of the building have no interior columns.

The lower levels of the building are used by retail businesses, including Eataly, [27] and connects via an underground "retail and transportation concourse" to the PATH's World Trade Center station and the New York City Subway's WTC Cortlandt station. [11] The city of New York also plans to lease 581,642 square feet (54,036.3 m2) of space, which is not in use yet, in the completed building. [24] A February 2017 announcement by Spotify that it would lease floors 62 through 72 for its United States headquarters, along with a subsequent expansion announcement that July, brought 4 World Trade Center to full occupancy. [28] [29] SportsNet New York, carrier of New York Mets broadcasts, moved its headquarters from 1271 Avenue of the Americas to an 83,000 square feet (7,700 m2) facility in 4 WTC. [30]

The building's elevators are supplied by Schindler, and are the second fastest in North America at 9 m/s (1800 fpm). [31]