From Wikipedia, the free encyclopedia
This is the latest accepted revision, reviewed on 9 July 2020.
English-American rapper from Georgia

His debut studio album, Issa Album, was released on July 7, 2017. [13] It debuted at number two on the Billboard 200 and gave him his first Billboard Hot 100 top 20 song, " Bank Account." His first number one single came at the end of 2017 with his feature on Post Malone's " Rockstar", which was nominated in two categories at the 61st Grammy Awards. [14] [15] On October 31, 2017, he released the Offset and Metro Boomin collaboration Without Warning. In December 2018, he released his second album, I Am > I Was, which debuted at number one on the Billboard 200 and stayed at number one for two consecutive weeks. [16]

21 Savage was arrested by the U.S. Immigration and Customs Enforcement (ICE) on February 3, 2019. Officials stated that he is a citizen of the United Kingdom who entered the U.S. in July 2005 and then unlawfully overstayed his visa when it expired in July 2006. [17] He was granted bond on February 12 and released the next day, pending the outcome of an expedited deportation hearing. [18] The hearing was initially scheduled for April 9, but was later postponed indefinitely. [19]

Shéyaa Bin Abraham-Joseph was born on October 22, 1992, at Newham Hospital in Plaistow, London, England, to British-born parents Heather Carmillia Joseph and Kevin Cornelius Emmons, [1] [2] who are of Dominican and Haitian descent respectively. [22] [23] His twin sisters, dance choreographers Kyra and Jayda Davis, and father continue to live in London, with Emmons working for Westminster City Council. 21 Savage's grandmother lives in Brixton.[ citation needed] 21 Savage's parents separated early in his life, and he moved with his mother to Atlanta, Georgia, at the age of 7. [24] [25] [26] In June 2005, at the age of 12, he went to the United Kingdom for the funeral of an uncle, [27] stayed for a month and then returned to the United States on July 22, 2005, on an H-4 visa, [28] which allegedly expired a year later. [17] [29] [30] 21 Savage's mother then began a relationship with Dr. Amsu Anpu, an endocrinologist and British expatriate, with whom she had more children. [31] He had a brother Quantivayus ("Tay-Man") who died in a shooting after an attempted drug deal. [32]

In the seventh grade, 21 Savage was banned permanently from every school in DeKalb County School District for gun possession. [33] This led him to begin attending schools around the Atlanta metropolitan area before being sent to a youth detention center. [34] After being released from the youth detention center, he completed eighth grade through an alternative program before finishing a semester of high school; he dropped out in his freshman year following multiple exclusions that he said "exhausted" him. [35]

After dropping out, 21 Savage joined a local street gang affiliated with the wider Bloods street gang [9] and became a full-time drug dealer, mainly selling cannabis. [35] He also regularly took part in other criminal activities including robbery and car theft, although he was only arrested once after contraband was found in a car he was driving. [36] In 2011, when 21 Savage was 19, he lost his "right hand" man, Larry, in a shootout. [35] In 2013, during an attempted robbery on his 21st birthday, 21 Savage was shot six times by rival gang members and his best friend Johnny was killed. [19] [37]

Following the death of his friend in a shootout on his 21st birthday, 21 Savage began rapping. [36] [38] His music career was originally subsidized by his deceased friend's uncle, who gave him money for studio time in 2013. [9] On November 12, 2014, 21 Savage's debut single, "Picky", produced by DJ Plugg, was released. It was later included on his debut mixtape, The Slaughter Tape, which was released on May 25, 2015. [39] The release made him what Interview Magazine called an "underground hero in Atlanta." [9]

On October 31, 2017, a collaborative studio album by 21 Savage, Offset, and Metro Boomin named Without Warning was released. Without Warning debuted at number four on the US Billboard 200 [54] and received generally positive reviews from critics. Its lead single, " Ric Flair Drip" peaked at number 13 on the Billboard Hot 100. [55] [56]

Main article: I Am Greater than I Was 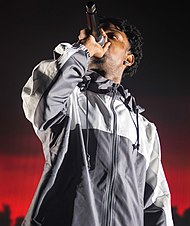 In April 2018, 21 Savage had a guest appearance on Young Thug's extended play Hear No Evil along with fellow rappers Nicki Minaj and Lil Uzi Vert. [57] Later that month, he also appeared on the single "Outstanding" by SahBabii. [58] On March 21, 2018, he was featured on the single "Rover 2.0", which is part of BlocBoy JB's Simi mixtape. [59] [60] In the following month, he was featured on Ty Dolla Sign's "Clout", which was part of the deluxe edition of his album Beach House 3. [61]

On October 31, 2018, 21 Savage posted on his Instagram a picture of a man in silhouette jumping in the air in the direction away from a large blaze. In the bottom right corner of the picture there is a "Parental Advisory" notice, as there oftentimes is on the cover of rap releases. 21 Savage also tagged Metro Boomin in the post. For these reasons, some speculated it to be a sequel to 2017's Without Warning album. However, it turned out to be the cover for Metro's debut solo album, Not All Heroes Wear Capes. [62]

On December 6, 2018, 21 Savage posted cover art for upcoming album, I Am > I Was, on Instagram, which features a blurred out image of himself, captioning the image with a number of goat emojis. [63] The next day, 21 Savage took to Twitter and his Instagram story to apologize that he "forgot" to release the album, saying on Twitter: "Dam I forgot to drop my album my bad y'all." [64] He announced a new date of December 21, 2018. [65] The track-list was leaked by record producer Louis Bell via his Instagram story on December 13, 2018. [66] [67]

Called "one of the last street homies left back there making music" by frequent collaborator Metro Boomin, [75] 21 Savage's music is heavily autobiographic with an emphasis on violent and criminal aspects of his past, including murder and drug dealing. [36] Vocally, he is known for his "trademark villainous monotone drawl." [76]

In 2018, 21 Savage reportedly started a movement called "Guns Down, Paintballs Up" which was intended to reduce gun violence by suggesting the use of paintball guns instead of lethal firearms. [77] The head of the Detroit Police Department, James Craig, described the movement as "well-intentioned, however, misguided", after several incidents involving paintball guns later resulted in injuries, disorderly conduct involving large groups of people with paintball guns, property vandalism (e.g., of police vehicles), violent reprisals, and the mistaking of paintball guns for firearms. [78] [79] The movement has been linked to several cases of property crime and homicide. [77] [80] 21 Savage has not commented on the matter, although he paid for the funeral of a 3-year-old who was killed in a related incident. [77] [80]

Controversy arose after 21 Savage pulled out a firearm during a pool party on June 10, 2018. [81] 21 Savage had been given the firearm by a friend after seeing an opposing crew member also pull out a pistol. [82]

"ASMR", a song from 21 Savage's second studio album I Am > I Was, caused some controversy with its lyrics. The lyrics included "We been gettin' that Jewish money, everything is kosher." The lyrics came under fire for perpetuating negative Jewish stereotypes when LeBron James shared an Instagram story quoting the track. [83] 21 Savage later apologized, saying on Twitter that "The Jewish people I know are very wise with there [ sic] money so that's why I said we been gettin' Jewish money. I never thought anyone would take offense, I'm sorry if I offended everybody, never my intention – I love all people." [84]

In early 2020, a feud between 21 Savage and American producer Young Chop arose after Chop insulted 21 Savage on an Instagram livestream. [85] On April 6, while reportedly taking an Uber in 21 Savage's neighborhood in an attempt to find where he lived, Chop stated that an unknown gunman fired at his car, but he was not injured. No other sources have confirmed whether or not this story is true and no gunshots were captured on the video in which he made the accusation. [86]

21 Savage was convicted of felony drug charges in October 2014 in Fulton County, Georgia. [93]

Arrest on immigration charges in 2019

On February 3, 2019, just two days after releasing the music video for his single " A Lot", 21 Savage was taken into custody by the U.S. Immigration and Customs Enforcement (ICE) after a vehicle was pulled over that contained him and his cousin, the rapper known as Young Nudy, and two other men. Young Nudy and the two other men had been targeted in an operation involving charges of aggravated assault and violation of the Georgia Gang Act. [94] 21 Savage later alleged that he was personally also targeted in the operation. [24] After his arrest, ICE revealed that 21 Savage is a British national who has been in the United States unlawfully since his non-immigrant visa expired in July 2006. 21 Savage's management team expresses he has been trying to get his Visa renewed since the year 2017. Before this, 21 Savage had commonly been believed to be a native of the Atlanta area – e.g., Interview magazine had reported in an interview with Seth Rogen in April 2018 that the rapper's birthplace was Atlanta, Georgia, and in a 2016 interview with XXL Magazine, he said he was "from Decatur, Georgia" (which is in the Atlanta metropolitan area). [29] [95] [96] [97]

A spokesperson for ICE said of 21 Savage, "His whole public persona is false. He actually came to the U.S. from the U.K. as a teen and overstayed his visa." [98] A birth certificate then surfaced showing that 21 Savage was born in Newham, London, on October 22, 1992. [1] [99] This indicates that he had been 12 years old in July 2005 – not "a teen" (and he had also been in the U.S. from the age of 7 until his one-month departure in 2005). [24] His attorney acknowledged that 21 Savage had overstayed the expired visa, but said that he had not attempted to hide his background, and said that the Department of Homeland Security had been aware that in 2017 he had applied for a U visa – a type of non-immigrant visa offered to crime victims and their family members who are willing to assist law enforcement officials in the investigation or prosecution of criminal activity. [30]

21 Savage has been released from ICE's custody, however, his case is still pending. He is allowed to move around the US, but cannot travel abroad. [100]

Theft by deception charges in 2019

On February 15, 2019, 21 Savage turned himself in to authorities and was booked into a south Georgia jail in response to a warrant for his arrest for felony theft by deception. This dispute surrounds a gig arranged in 2016 for which the rapper allegedly accepted a payment of $17,000 to appear at a concert, but did not appear and did not give back the money. He was released on his own recognizance, pending a court hearing on a later date to resolve the charge. [101] [102]

In March 2018, 21 Savage announced the creation of the 21 Savage Bank Account Campaign (named after his hit song " Bank Account") on The Ellen DeGeneres Show, he also announced that he was donating $21,000 to the cause. 21 Savage stated "I started the 21 Savage Bank Account Campaign and it's to help kids learn how to save money and make money, and open bank accounts for kids." [103] In early August 2016, 2017, 2018, and 2019, 21 Savage hosted the "Issa Back to School Drive" (named after his album Issa Album) in his home neighborhood in Atlanta, Georgia. The drive gave free haircuts, hairstyles, supplies, and school uniforms. In July 2018, 21 Savage donated $10,000 to Atlanta's Continental Colony Elementary School to fund an anti-bullying campaign. [104] On July 1, 2020, 21 Savage announced he was launching a free online financial literacy education program for kids and teenagers stuck at home during the COVID-19 pandemic, saying, "I feel like it's important more than ever to give our next generation the tools to succeed in life." The program includes a partnership with Atlanta mayor Keisha Lance Bottoms to provide free tablets and WiFi to underserved students in the Atlanta. [105]