From Wikipedia, the free encyclopedia
Political convention of the Republican Party

The Astrodome was the site of the 1992 Republican National Convention 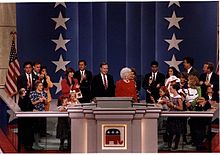 Bush with his family at the convention

The 1992 Republican National Convention was held in the Astrodome in Houston, Texas, from August 17 to August 20, 1992. The convention nominated President George H. W. Bush and Vice President Dan Quayle for reelection. It was Bush's fourth consecutive appearance as a candidate on a major party ticket; only Bush and Franklin D. Roosevelt have been nominated on four consecutive presidential tickets. Richard M. Nixon and Roosevelt were nominated five times, but not consecutively.

The convention was held in Houston's Astrodome. To accommodate the convention and its set-up, the Houston Astros, the Major League Baseball team which played at the Astrodome, played 26 consecutive away games over 28 days, the longest Major League Baseball "road trip" since the Philadelphia Phillies played 27 away games in 28 days in 1944. [1] Additionally, the National Football League's Houston Oilers would also be forced to play all their preseason games on the road. [2]

The convention is notable in that it featured the last major address of the long political career of former President Ronald Reagan, Bush's predecessor. In his speech, Reagan told Americans that:

Whatever else history may say about me when I'm gone, I hope it will record that I appealed to your best hopes, not your worst fears, to your confidence rather than your doubts. My dream is that you will travel the road ahead with liberty's lamp guiding your steps and opportunity's arm steadying your way. My fondest hope for each one of you—and especially for the young people here—is that you will love your country, not for her power or wealth, but for her selflessness and her idealism. May each of you have the heart to conceive, the understanding to direct, and the hand to execute works that will make the world a little better for your having been here.

As the economy was in a recession and domestic affairs in general had dramatically decayed, the GOP lagged in the polls by double digits behind the Bill Clinton– Al Gore Democratic ticket after a successful Democratic Convention, and with Ross Perot temporarily out of the race, the Republican Party worked hard to rally its base of social conservatives. Pat Buchanan's opening night " Culture War" speech argued that a great battle of values was taking place in the United States. Republican National Committee chairman Rich Bond (referring to Democrats) claimed that "we are America, they are not America." Marilyn Quayle dismissed Bill Clinton's claim to a new generation of leadership by saying, "Not everyone demonstrated, dropped out, took drugs, joined in the sexual revolution or dodged the draft." [3] Regarding Buchanan's speech, liberal humorist Molly Ivins quipped that it "probably sounded better in the original German." [4] Twenty years after the convention, the New York Times wrote, "Supporters of Mr. Bush pointed to the tone of the convention as one of the reasons he lost re-election that November to Bill Clinton," [5] as it centered more on Reagan-era values and Bush's international credentials at a time that the main issue was the domestic crisis. The fact that the now-infamous "No new taxes" pledge had haunted the President for the last three years, the economy was barely mentioned.

During his acceptance speech, President Bush thanked former President Richard Nixon for his advice and contributions to the administration's foreign policy. This would be Nixon's last RNC, as he died in 1994.

Restaurateur Ninfa Laurenzo delivered the Pledge of Allegiance at the opening session on August 17, 1992. [10]

The stadium banned outside food from the convention, but set up a food court in the nearby Astroarena. The food court operations included Atchafalaya River Cafe, Bambolino's, Frenchy's, Luther's Bar-B-Q, Ninfa's, PeaColes, and Tommy's Burgers. Some restaurant owners had connections with the Houston Host Committee, the group in charge of the vendor market of the Astroarena, and Republican Party officials. The hot dogs and soft drinks sold by the Astrodome's official caterer, Harry M. Stevens, were not present during the convention. Vendors at the convention paid Stevens a fee so they could sell food at the convention, as specified in Stevens' contract with the Astrodome. [11]

The convention energized the Republican base, giving the Bush-Quayle ticket a bounce in the polls. [12] As the bounce faded, the race returned to a lopsided double-digit Clinton–Gore lead. [13] The race narrowed considerably, however, when Ross Perot rebooted his insurgent campaign. [14]

The major parties have avoided hosting their conventions at baseball stadiums since then, now holding them in non sports venues (such as convention centers) and venues for teams whose seasons are not currently in play at the time of the convention.