Look up solitaire in Wiktionary, the free dictionary. 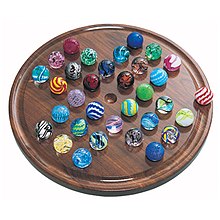 A typical solitaire board 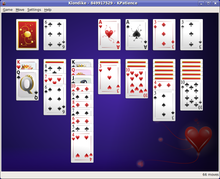 In North America, patience games like Klondike are called solitaire.

Solitaire is any tabletop game which one can play by oneself, usually with cards, but also with dominoes. The term "solitaire" is also used for single-player games of concentration and skill using a set layout tiles, pegs or stones. These games include peg solitaire and mahjong solitaire. The game is most often played by one person, but can incorporate others.

The origins of Card Solitaire or Patience are unclear, but the earliest records appear in the late 1700s across northern Europe and Scandinavia. [1] The term Patiencespiel appears in Das neue Königliche L’Hombre-Spiel, a German book published in 1788. [2] Books were also reported to appear in Sweden and Russia in the early 1800s. There are additional references to Patience in French literature. [3] In the United States, the first card solitaire book, Patience: A series of thirty games with cards, was published by Ednah Cheney in 1870. [4]

The most popular card solitaire is Klondike,[ citation needed] which was called Microsoft Solitaire in a digital implementation included with the Windows operating system from 1990 onwards.

Wikibooks has a book on the topic of: Solitaire card games