From Wikipedia, the free encyclopedia
A genus of flowering plants belonging to the agave and Joshua tree subfamily
This article is about the genus comprising species of perennials, shrubs, and trees. For yuca, the term in many Latin American dialects for a species of root vegetable, see Cassava. For other uses, see Yucca (disambiguation).

Yucca is a genus of perennial shrubs and trees in the family Asparagaceae, subfamily Agavoideae. [2] Its 40–50 species are notable for their rosettes of evergreen, tough, sword-shaped leaves and large terminal panicles of white or whitish flowers. They are native to the hot and dry ( arid) parts of the Americas and the Caribbean.

Early reports of the species were confused with the cassava (Manihot esculenta). [3] Consequently, Linnaeus mistakenly derived the generic name from the Taíno word for the latter, yuca. [4]

The natural distribution range of the genus Yucca (49 species and 24 subspecies) covers a vast area of the Americas. The genus is represented throughout Mexico and extends into Guatemala ( Yucca guatemalensis). It also extends to the north through Baja California in the west, northwards into the southwestern United States, through the drier central states as far north as southern Alberta in Canada ( Yucca glauca ssp. albertana).

Yucca is also native to some of the Caribbean Islands, northward to the coastal lowlands and dry beach scrub of the coastal areas of the southeastern United States, along the Gulf of Mexico and South Atlantic States from coastal Texas to Maryland.

Yuccas have adapted to an equally vast range of climatic and ecological conditions. They are to be found in rocky deserts and badlands, in prairies and grassland, in mountainous regions, in light woodland, in coastal sands ( Yucca filamentosa), and even in subtropical and semi temperate zones, although these are generally arid to semi-arid.

Yuccas have a very specialized, mutualistic pollination system, being pollinated by yucca moths (family Prodoxidae); the insect transfers the pollen from the stamens of one plant to the stigma of another, and at the same time lays an egg in the flower; the moth larva then feeds on some of the developing seeds, always leaving enough seed to perpetuate the species. Certain species of the yucca moth have evolved antagonistic features against the plant and do not assist in the plant's pollination efforts while continuing to lay their eggs in the plant for protection. [5] 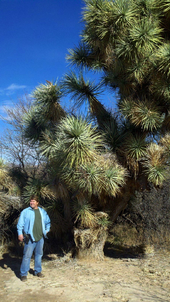 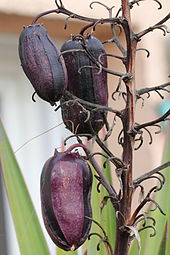 Beetle herbivores include yucca weevils, in the Curculionidae.

Yuccas are widely grown as ornamental plants in gardens. Many species also bear edible parts, including fruits, seeds, flowers, flowering stems, [9] and more rarely roots. References to yucca root as food often arise from confusion with the similarly pronounced, but botanically unrelated, yuca, also called cassava or manioc (Manihot esculenta). Roots of soaptree yucca ( Yucca elata) are high in saponins and are used as a shampoo in Native American rituals. Dried yucca leaves and trunk fibers have a low ignition temperature, making the plant desirable for use in starting fires via friction. The stem (when dried) that sports the flowers is often used in collaboration with a sturdy piece of cedar for making primitive fire. [10] In rural Appalachian areas, species such as Yucca filamentosa are referred to as "meat hangers". The tough, fibrous leaves, with their sharp-spined tips, were used to puncture meat and knotted to form a loop with which to hang meat for salt curing or in smoke houses. The fibers can be used to make cordage, be it sewing thread or rope.[ citation needed]

The flower petals are commonly eaten in Central America, but its reproductive organs (the anthers and ovaries) are first removed because of their bitterness. [11] The petals are blanched for 5 minutes, and then cooked a la mexicana (with tomato, onion, chili) or in tortitas con salsa (egg-battered patties with green or red sauce). In Guatemala, they are boiled and eaten with lemon juice. [11]

In El Salvador, the tender tips of stems are eaten, and known locally as cogollo de izote. [11]

Yuccas are widely grown as architectural plants providing a dramatic accent to landscape design. They tolerate a range of conditions, but are best grown in full sun in subtropical or mild temperate areas. In gardening centres and horticultural catalogues they are usually grouped with other architectural plants such as cordylines and phormiums. [12]

Joshua trees ( Yucca brevifolia) are protected by law in some states. A permit is needed for wild collection. As a landscape plant, they can be killed by excessive water during their summer dormant phase, so are avoided by landscape contractors.

Several species of yucca can be grown outdoors in temperate climates, including:- [12]

The yucca flower is the state flower of New Mexico in the southwest United States. No species name is given in the citation, however the New Mexico Centennial Blue Book from 2012 references the soaptree yucca ( Yucca elata) as one of the more widespread species in New Mexico. [N 1]

As well, it is the national flower of El Salvador, where it is known as "flor de izote".[ citation needed]

As of February 2012 [update], the World Checklist of Selected Plant Families recognizes 49 species of Yucca and a number of hybrids: [13]

A number of other species previously classified in Yucca are now classified in the genera Dasylirion, Furcraea, Hesperaloe, Hesperoyucca, and Nolina.