The yellowfin tuna (Thunnus albacares) is a species of tuna found in pelagic waters of tropical and subtropical oceans worldwide.

Yellowfin is often marketed as ahi, from the Hawaiian ʻahi, a name also used there for the closely related bigeye tuna. [3] The species name, albacares ("white meat") can also lead to confusion: in English, the albacore (Thunnus alalunga) is a different species, while yellowfin is officially designated albacore in French and referred to as albacora by Portuguese fishermen.

Yellowfin tuna are epipelagic fish that inhabit the mixed surface layer of the ocean above the thermocline. Sonic tracking has found that although yellowfin tuna, unlike the related bigeye tuna, mostly range in the top 100 m (330 ft) of the water column. [6] Another study reported that depth tends to vary with time of day: 90% of their recorded depth values were shallower than 88 m (289 ft) during the night, and shallower than 190 m (620 ft) during the day. [7] 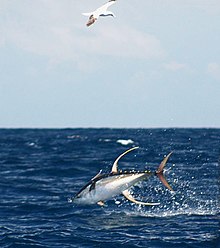 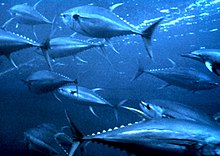 Although mainly found in deep offshore waters, yellowfin tuna may approach shore when suitable conditions exist. Mid-ocean islands such as the Hawaiian archipelago, other island groups in the Western Pacific, Caribbean, and Maldives islands Indian Ocean, as well as the volcanic islands of the Atlantic such as Ascension Island and Saint Helena, often harbor yellowfin feeding on the baitfish these spots concentrate close to the shoreline. Yellowfin may venture well inshore of the continental shelf when water temperature and clarity are suitable and food is abundant.

Yellowfin tuna often travel in schools with similarly sized companions. They sometimes school with other tuna species and mixed schools of small yellowfin, and skipjack tuna, in particular, are commonplace. They are often associated with various species of dolphins or porpoises, as well as with larger marine creatures such as whales and whale sharks. They also associate with drifting flotsam such as logs and pallets, and sonic tagging indicates some follow moving vessels. Hawaiian yellowfins associate with anchored fish aggregation devices and with certain sections of the 50-fathom curve.

Yellowfin tuna at an aquarium in Japan

Yellowfin tuna prey include other fish, pelagic crustaceans, and squid. Like all tunas, their body shape is particularly adapted for speed, enabling them to pursue and capture fast-moving baitfish such as flying fish, sauries, and mackerel. Schooling species such as myctophids or lanternfish and similar pelagic driftfish, anchovies, and sardines are frequently taken. Large yellowfins prey on smaller members of the tuna family such as frigate mackerel and skipjack tuna.

In turn, yellowfin are preyed upon when young by other pelagic hunters, including larger tuna, seabirds, and predatory fishes such as wahoo, shark, and billfish. Adults are threatened only by the largest and fastest hunters, such as toothed whales, particularly the false killer whale, pelagic sharks such as the mako and great white, large Atlantic blue marlin and Pacific blue marlin, and black marlin. The main source of mortality, however, is industrial tuna fisheries.

Yellowfins are able to escape most predators because of their speed, swimming at up to 20.8 m/s (47 mph). [9] Unlike most fish, tuna are warm-blooded. [10] Their unique cardiovascular system, warm body temperature, elevated metabolism, and well-developed lymphatic system are all involved in their ability to engage in both rapid bursts and long periods of swimming. When swimming rapidly, a tuna's fins retract into grooves to form a smooth aerodynamic surface and increase its speed, due to a biological hydraulic system involving the lymphatic system. [11] [12]

The behavior of abruptly diving to deeper levels may be a tactic to escape predators. Evidence from trackers even includes a case in which a diving yellowfin tuna may have been swallowed at a depth of 326 m (1,070 ft). [8] [7]

Yellowfin tuna loaded onto a truck for transportation in Palabuhanratu, West Java

Modern commercial fisheries catch yellowfin tuna with encircling nets (purse seines), and by industrial longlines. In 2010, 558,761 metric tons of yellowfin tuna were caught in the western and central Pacific Ocean. [10]

Formerly, much of the commercial catch was made by pole-and-line fishing, using live bait such as anchovy to attract schools of tuna close to the fishing vessel that were then taken with baited jigs on sturdy bamboo or fiberglass poles or on handlines. This fishery, which targeted skipjack and occasionally albacore, as well as yellowfin, for canning, reached its heyday between World War I and the 1950s before declining. The most well-known fleet of pole-and-line boats sailed from San Diego [13] in California and exploited abundant stocks in Mexican waters, as well as further south to Panama, Costa Rica, and the Galapagos Islands. [14]

Pole-and-line fishing is still carried out today in the Maldives, Ghana, the Canary Islands, Madeira, and the Azores. Few pole-and-line boats now specifically target yellowfin, an incidental take compared to the total commercial catch. In the Maldives, the catch is a mix of skipjack tuna and small yellowfins that often associate with them.

Juvenile yellowfin caught with purse seine near the Philippines 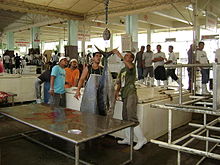 A yellowfin being weighed at the General Santos Fish Port Complex in General Santos City, the center of the tuna industry in the Philippines which is the world's 4th largest producer of canned and fresh-chilled tuna products [15] [16]

Purse seining largely took over commercial tuna fisheries in the 1960s and 1970s. Today, purse seines account for more of the commercial catch than any other method. The purse-seine fishery primarily operates in the Pacific Ocean, in the historic tuna grounds of the San Diego tuna fleet in the eastern Pacific, and in the islands of the western Pacific, where many U.S. tuna canneries relocated in the 1980s, but significant purse-seine catches are also made in the Indian Ocean and in the tropical Atlantic Ocean, especially in the Gulf of Guinea by French and Spanish vessels.

Purse-seine vessels locate tuna using onboard lookouts, as was done in the pole-and-line fishery, but they also employ sophisticated onboard electronics, sea-surface temperature and other satellite data, and helicopters overhead. Once a school is located, the net is set around it. A single set may yield 100 t (98 long tons; 110 short tons). Modern tuna seiners have a capacity up to 2,000 metric tons (2,000 long tons; 2,200 short tons), reach speeds of over 17 knots (31 km/h; 20 mph), and carry multiple spotting helicopters. [17]

Purse seining for yellowfin tuna became highly controversial in the late 1970s when it became apparent that the eastern Pacific fishery was killing many spinner dolphins, pantropical spotted dolphins, and other cetaceans (often called " porpoises" by the tuna fleet) that accompany the fish. This association has been long-recognized by commercial tuna fishermen.

Since the introduction of " dolphin-friendly" labeling, an increasing number of purse seine sets are now made on "free schools" unassociated with dolphins, as well as schools that associate with floating objects—another long-understood association that has grown in importance in tuna fisheries. The latter practice in particular has a major ecological impact because of the high proportion of bycatch, including manta rays, sea turtles, pelagic sharks, billfish, and other threatened marine species taken by setting nets around logs and other floating objects. Such tuna are often significantly smaller than the larger adult tuna associated with dolphins. The removal of huge numbers of juvenile yellowfin and bigeye tuna that have yet to reach breeding age has major potential consequences for tuna stocks worldwide.

Most of the commercial catch is canned, but the sashimi marketplace adds significant demand for high-quality fish. This market is primarily supplied by industrial tuna longline vessels.

Industrial longlining was primarily perfected by Japanese fishermen who expanded into new grounds in the Western Pacific, Indian, and Atlantic Oceans in the late 1950s and early 1960s. Longlining has since been adopted by other fishermen, most notably South Korea, Taiwan, and the United States.

By far, the largest fishery using artisanal methods exists in Philippine and Indonesian waters where thousands of fishermen target yellowfin tuna around fish aggregation devices or payaos, although this fishery far exceeds the artisanal scale in terms of tonnage caught and the numbers of participants involved, and should more properly be considered a commercial handline fishery. General Santos City is the most important Philippine port for the landing and transhipment of catches. Catches that qualify as sashimi-grade are mostly shipped to the Japanese market; those that do not meet the grade are sold locally or canned. Elsewhere in the Pacific, small-boat fishers in Hawaii, Tahiti, and other Pacific islands supply local and in some cases foreign markets with fresh yellowfins.[ citation needed]

Handline-caught yellowfin tuna is one of the few exports of the economy of St. Helena.

Yellowfin tuna probably first came to the attention of sport fishermen when they appeared on the tuna grounds of Catalina Island, California, only a few years after pioneering fishermen invented the sport, targeting the Pacific bluefin tuna. These tuna were of the same species caught by commercial fishermen in Japan and the western Pacific, but the reason for their appearance was not known at the time. Later, warmer water species such as yellowfin tuna, dorado and striped marlin were found to enter southern California waters in seasons having favorable ocean conditions, particularly during the El Niño phenomenon, which brings warmer water up North America's western coast.

Yellowfin tuna were subsequently discovered by sport fishermen in Bermuda, the Bahamas, Hawai'i, and many other parts of their range. Larger adult fish which had developed distinctively long sickle fins were initially thought to be a different species and were known as Allison tuna (a name first given by the then curator of the Bermuda Aquarium, Louis Mowbray, in 1920). Such destinations as Hawai'i and Bermuda became famed for their catches of these beautiful fish. In Hawai'i, various styles of feather lures served as bait, but in Bermuda, chumming techniques from boats anchored on productive banks were evolved to target not only Allison tuna, but also wahoo and the smaller blackfin tuna. Bermudian experts developed techniques to take all these fish on light tackle, and for many years the International Game Fish Association records for yellowfin tuna were dominated by entries from Bermuda in the lighter line classes, with fish in the 200 lb (91 kg) and larger class from Hawai'i taking most of the heavier line-class records.

Yellowfin buyers recognize two grades, "sashimi grade" and "other", although variation in the quality of "other" grades occurs.

Different seafood sustainability guides come to different conclusions about whether yellowfin fishing is sustainable. The Audubon's Seafood Guide (a guide for what types of marine food products are not ecofriendly) lists troll-caught tuna as "OK", but labels long-line caught as "Be Careful". [18]

Yellowfin is becoming a popular replacement for the severely depleted supplies of southern bluefin tuna.