From Wikipedia, the free encyclopedia
Style of taxicab
This article is about yellow taxicabs. For other uses, see Yellow cab (disambiguation). 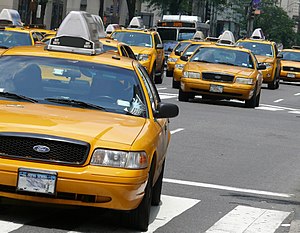 Yellow cab taxicab operators exist all around the world (some with common heritage, some without). The original Yellow Cab Company, based in Chicago, Illinois, was one of the largest taxicab companies in the United States.

Yellow cabs date back to at least 1798, when the musical comedy, Cabriolet Jaune (Yellow Cab), debuted at Paris' Theatre de l’Opera Comique National. Yellow cabs were known in Paris and London throughout most of the 1800s. A yellow cab company shook up the New York Cab system in the mid-1880s, offering cheaper, more predictable fares than competitors. One of the first automobile cabs in London, in the 1890s, was a yellow electric automobile. [1]

The Yellow Cab Company of Chicago was founded by John D. Hertz in 1907. [2] Their specially designed taxicabs were powered by a 4-cylinder Continental engine equipped with a purpose-built taxicab body supplied by the Racine Body Co., of Racine, Wisconsin. [3] According to Yellow Cab Co. tradition, the color (and name) yellow was selected by John Hertz as the result of a survey he commissioned at a "local university", which indicated it was the easiest color to spot. [4] However, "he was certainly not the first taxicab operator to use that color and the university study to which B. C. Forbes refers has yet to be discovered." [5] In 2017, a study showed that the color yellow, for taxis, was more noticeable, resulting in 9% fewer accidents. [6]

In 1908, Albert Rockwell, founder and General Manager of the New Departure Manufacturing Co. of Bristol, Connecticut, travelled to Europe to evaluate their taxi systems, hoping to develop a similar one in Washington, D.C. [7] Ernest Wyckoff, Alfred Church and Clarence Partridge, well-known automobile dealers in New York, had a number of orange-yellow colored Rockwell taxicabs operating on Manhattan streets in 1909. [3] By March 1910, the Connecticut Cab Co. (essentially the directors of New Departure Manufacturing Co.) assumed operating control of Wyckoff, Church and Partridge's taxis. [8]

The Yellow Taxicab Co. was incorporated in New York on April 4, 1912. Its fares that year started at 50¢/mile (roughly equivalent to $12.12 in 2016 adjusted for inflation). [9] Among its directors and major stockholders were Albert Rockwell and the Connecticut Cab Co.[ citation needed] Shortly after incorporation the Yellow Taxicab Co. merged with the Cab and Taxi Co., and with the strength of Connecticut Cab Co. behind them, the young business assumed a large share of the New York market. Its independent corporate life was fairly short, however, as fare wars and regulations forced a merger with the Mason-Seaman Transportation Co. on March 3, 1914. Shortly after, an injunction was filed by the company, seeking to restrain the city from enforcing the Public Hack ordinances, but it was rejected on appeal. [10] By 1916, the company was being held in receivership, due to suits by numerous creditors. [11]

The Yellow Cab Manufacturing Company was formed in 1920. [3]

A Yellow Taxi in Kolkata