From Wikipedia, the free encyclopedia
1957 single by Buddy Holly
This article is about the Buddy Holly song. For other uses, see Words of Love (disambiguation).

"Words of Love" is a song written by Buddy Holly and released as a single in 1957.

Holly recorded the song on April 8, 1957. Holly harmonized with himself, by combining tape recordings of each part. The song was not a notable hit for Holly, although it is regarded as one of his important recordings and is available in most standard Holly collections. [3]

A compilation album, Words of Love, released by PolyGram in the UK in 1993, reached number 1 and was certified as a gold record. [4] 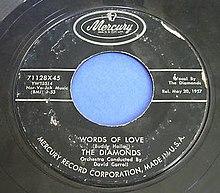 A doo-wop version by the Diamonds, released by Mercury Records on May 20, 1957, reached number thirteen on the Billboard Hot 100 in July 1957, making the song Holly's first hit, though as a composer not performer. The Diamonds also performed the song live on the ABC television show Circus Time on June 27, 1957, and included it on the 1962 Mercury LP album Pop Hits (MGW 12178).

The Beatles recorded a cover version of the song on October 18, 1964 for the UK album Beatles for Sale. It first appeared in the U.S. on the album Beatles VI. It was also on a 7-inch extended play, Beatles for Sale No. 2, released by Parlophone/EMI in 1965. John Lennon and Paul McCartney, who were fans of Holly, sang in harmony with George Harrison, [5] holding to the vocal and instrumental sound of Holly's original as well as they could. Before their big break, the group had performed the song live between 1958 and 1962, with Lennon and Harrison singing. For the official release, though, Lennon and McCartney shared vocal duties. [6] The song only took two takes, along with a vocal overdub.

Personnel according to Ian MacDonald [7]

A 1963 Beatles performance of "Words of Love" recorded for BBC broadcast is included on the 2013 compilation album On Air – Live at the BBC Volume 2. The recording was also included on a five-song promotional EP from the album, and on a DVD or Blu-ray included with the 2015 album 1+.