A white-nosed coati sniffing around at the Philadelphia Zoo

White-nosed coatis inhabit wooded areas ( dry and moist forests) of the Americas. They are found at any altitude from sea level to 3,000 m (9,800 ft), [9] and from as far north as southeastern Arizona and New Mexico, through Mexico and Central America, to far northwestern Colombia ( Gulf of Urabá region, near Colombian border with Panama). [10] [11] There has been considerable confusion over its southern range limit, [12] but specimen records from most of Colombia (only exception is far northwest) and Ecuador are all South American coatis. [10] [11]

White-nosed coatis have also been found in the U.S. state of Florida, where they are an introduced species. It is unknown precisely when introduction occurred; an early specimen in the Florida Museum of Natural History, labeled an "escaped captive", dates to 1928. There are several later documented cases of coatis escaping captivity, and since the 1970s there have been a number of sightings, and several live and dead specimens of various ages have been found. These reports have occurred over a wide area of southern Florida, and there is probable evidence of breeding, indicating that the population is well established. [14]

Skull of a white nosed coati

They are omnivores, preferring small vertebrates, fruits, carrion, insects, snakes, and eggs. They can climb trees easily, where the tail is used for balance, but they are most often on the ground foraging. Their predators include boas, raptors, cats, and tayras (Eira barbara). They readily adapt to human presence; like raccoons, they will raid campsites and trash receptacles. They can be tamed easily, and have been verified experimentally to be quite intelligent.[ citation needed] 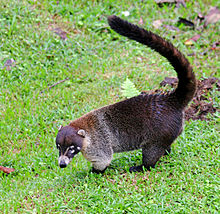 A white-nosed coati in a conservation area in Arenal, Costa Rica

While the raccoon and ringtail are nocturnal, coatis are active by day, retiring during the night to a specific tree and descending at dawn to begin their daily search for food. However, their habits are adjustable, and in areas where they are hunted by humans for food, or where they raid human settlements for their own food, they might become more nocturnal. Adult males are solitary, but females and sexually immature males form social groups. They use many vocal signals to communicate with one another, and also spend time grooming themselves and each other with their teeth and claws. During foraging times, the young cubs are left with a pair of babysitters, similar to meerkats. The young males and even some females tend to play-fight. Many of the coatis will have short fights over food.[ citation needed]

White-nosed coatis are known pollinators of the balsa tree, as observed in a study of a white-nosed coati population in Costa Rica. [15] The coati were observed inserting their noses into the flowers of the tree and ingesting nectar, while the flower showed no subsequent signs of damage. Pollen from the flowers covers the face of the coati following feeding, and later disseminates through the surrounding forest following detachment. Scientists observed a dependent relationship between the balsa tree, which provides a critical resource of hydration and nutrition to the white-nosed coati when environment resources are scarce, and the coati, which increases proliferation of the tree through pollination.