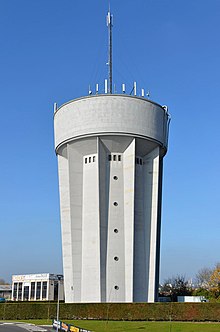 A water tower is an elevated structure supporting a water tank constructed at a height sufficient to pressurize a distribution system for potable water, and to provide emergency storage for fire protection. [1] Water towers often operate in conjunction with underground or surface service reservoirs, which store treated water close to where it will be used. [2] Other types of water towers may only store raw (non-potable) water for fire protection or industrial purposes, and may not necessarily be connected to a public water supply.

Water towers are able to supply water even during power outages, because they rely on hydrostatic pressure produced by elevation of water (due to gravity) to push the water into domestic and industrial water distribution systems; however, they cannot supply the water for a long time without power, because a pump is typically required to refill the tower. A water tower also serves as a reservoir to help with water needs during peak usage times. The water level in the tower typically falls during the peak usage hours of the day, and then a pump fills it back up during the night. This process also keeps the water from freezing in cold weather, since the tower is constantly being drained and refilled. [3]

Although the use of elevated water storage tanks has existed since ancient times in various forms, the modern use of water towers for pressurized public water systems developed during the mid-19th century, as steam-pumping became more common, and better pipes that could handle higher pressures were developed. In the United Kingdom, standpipes consisted of tall, exposed, N-shaped pipes, used for pressure relief and to provide a fixed elevation for steam-driven pumping engines which tended to produce a pulsing flow, while the pressurized water distribution system required constant pressure. Standpipes also provided a convenient fixed location to measure flow rates. Designers typically enclosed the riser pipes in decorative masonry or wooden structures. By the late 19th century, standpipes grew to include storage tanks to meet the ever-increasing demands of growing cities. [1]

Many early water towers are now considered historically significant and have been included in various heritage listings around the world. Some are converted to apartments or exclusive penthouses. [4] In certain areas, such as New York City in the United States, smaller water towers are constructed for individual buildings. In California and some other states, domestic water towers enclosed by siding ( tankhouses) were once built (1850s–1930s) to supply individual homes; windmills pumped water from hand-dug wells up into the tank in New York. 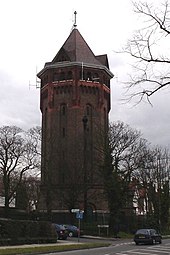 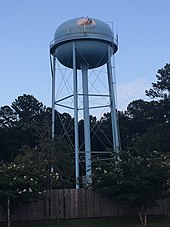 A variety of materials can be used to construct a typical water tower; steel and reinforced or prestressed concrete are most often used (with wood, fiberglass, or brick also in use), incorporating an interior coating to protect the water from any effects from the lining material. The reservoir in the tower may be spherical, cylindrical, or an ellipsoid, with a minimum height of approximately 6 metres (20 ft) and a minimum of 4 m (13 ft) in diameter.[ citation needed] A standard water tower typically has a height of approximately 40 m (130 ft).

Pressurization occurs through the hydrostatic pressure of the elevation of water; for every 10.20 centimetres (4.016 in) of elevation, it produces 1 kilopascal (0.145  psi) of pressure. 30 m (98.43 ft) of elevation produces roughly 300 kPa (43.511 psi), which is enough pressure to operate and provide for most domestic water pressure and distribution system requirements.

The height of the tower provides the pressure for the water supply system, and it may be supplemented with a pump. The volume of the reservoir and diameter of the piping provide and sustain flow rate. However, relying on a pump to provide pressure is expensive; to keep up with varying demand, the pump would have to be sized to meet peak demands. During periods of low demand, jockey pumps are used to meet these lower water flow requirements. The water tower reduces the need for electrical consumption of cycling pumps and thus the need for an expensive pump control system, as this system would have to be sized sufficiently to give the same pressure at high flow rates.

Very high volumes and flow rates are needed when fighting fires. With a water tower present, pumps can be sized for average demand, not peak demand; the water tower can provide water pressure during the day and pumps will refill the water tower when demands are lower. 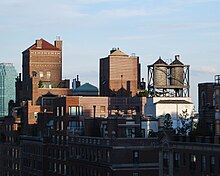 The adjacent image shows three architectural approaches to incorporating these tanks in the design of a building, one on East 57th Street in New York City. From left to right, a fully enclosed and ornately decorated brick structure, a simple unadorned roofless brick structure hiding most of the tank but revealing the top of the tank, and a simple utilitarian structure that makes no effort to hide the tanks or otherwise incorporate them into the design of the building.

The technology dates to at least the 19th century, and for a long time New York City required that all buildings higher than six stories be equipped with a rooftop water tower. [5] Two companies in New York build water towers, both of which are family businesses in operation since the 19th century. [5]

The original water tower builders were barrel makers who expanded their craft to meet a modern need as buildings in the city grew taller in height. Even today, no sealant is used to hold the water in. The wooden walls of the water tower are held together with steel cables or straps, but water leaks through the gaps when first filled. As the water saturates the wood, it swells, the gaps close and become impermeable. [6] The rooftop water towers store 25,000 to 50,000 litres (5,500 to 11,000 imp gal; 6,600 to 13,200 US gal) of water until it is needed in the building below. The upper portion of water is skimmed off the top for everyday use while the water in the bottom of the tower is held in reserve to fight fire. When the water drops below a certain level, a pressure switch, level switch or float valve will activate a pump or open a public water line to refill the water tower. [6] 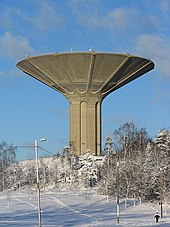 Architects and builders have taken varied approaches to incorporating water towers into the design of their buildings. On many large commercial buildings, water towers are completely hidden behind an extension of the facade of the building. For cosmetic reasons, apartment buildings often enclose their tanks in rooftop structures, either simple unadorned rooftop boxes, or ornately decorated structures intended to enhance the visual appeal of the building. Many buildings, however, leave their water towers in plain view atop utilitarian framework structures.[ citation needed]

Water towers are common in India, where the electricity supply is erratic in most places.[ citation needed]

If the pumps fail (such as during a power outage), then water pressure will be lost, causing potential public health concerns. Many U.S. states require a " boil-water advisory" to be issued if water pressure drops below 20 pounds per square inch (140 kPa).[ citation needed] This advisory presumes that the lower pressure might allow pathogens to enter the system.[ citation needed]

Historically, railroads that used steam locomotives required a means of replenishing the locomotive's tenders. Water towers were common along the railroad. The tenders were usually replenished by water cranes, which were fed by a water tower.[ citation needed]

Some water towers are also used as observation towers, and some restaurants, such as the Goldbergturm in Sindelfingen, Germany, or the second of the three Kuwait Towers, in the State of Kuwait. It is also common to use water towers as the location of transmission mechanisms in the UHF range with small power, for instance for closed rural broadcasting service, amateur radio, or cellular telephone service.[ citation needed]

In hilly regions, local topography can be substituted for structures to elevate the tanks. These tanks are often nothing more than concrete cisterns terraced into the sides of local hills or mountains, but function identically to the traditional water tower. The tops of these tanks can be landscaped or used as park space, if desired.[ citation needed]

The Chicago Bridge and Iron Company has built many of the water spheres and spheroids found in the United States. [8] The website World's Tallest Water Sphere describes the distinction between a water sphere and water spheroid thus:

A water sphere is a type of water tower that has a large sphere at the top of its post. The sphere looks like a golf ball sitting on a tee or a round lollipop. A cross section of a sphere in any direction (east-west, north-south, or top-bottom) is a perfect circle. A water spheroid looks like a water sphere, but the top is wider than it is tall. A spheroid looks like a round pillow that is somewhat flattened. A cross section of a spheroid in two directions (east-west or north-south) is an ellipse, but in only one direction (top-bottom) is it a perfect circle. Both spheres and spheroids are special-case ellipsoids: spheres have symmetry in 3 directions, spheroids have symmetry in 2 directions. Scalene ellipsoids have 3 unequal length axes and three unequal cross sections. [9]

The Union Watersphere is a water tower topped with a sphere-shaped water tank in Union, New Jersey, [10] and characterized as the World's Tallest Water Sphere. 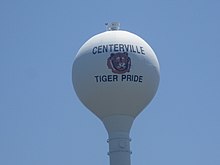 Water towers can be surrounded by ornate coverings including fancy brickwork, a large ivy-covered trellis or they can be simply painted. Some city water towers have the name of the city painted in large letters on the roof, as a navigational aid to aviators and motorists. Sometimes the decoration can be humorous. An example of this are water towers built side by side, labeled HOT and COLD. Cities in the United States possessing side-by-side water towers labeled HOT and COLD include Granger, Iowa; Canton, Kansas; Pratt, Kansas, and St. Clair, Missouri; Eveleth, Minnesota at one time had two such towers, but no longer does. [27]

Many small towns in the United States use their water towers to advertise local tourism, their local high school sports teams, or other locally notable facts. [28] A "mushroom" water tower was built in Örebro, Sweden and holds almost two million gallons of water. [29] 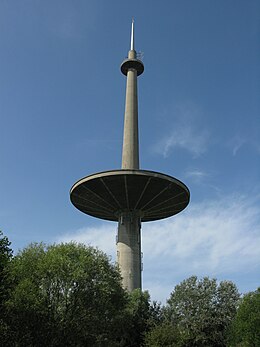 Mechelen-Zuid water tower in Belgium, one of the tallest in the world [30]

Alternatives to water towers are simple pumps mounted on top of the water pipes to increase the water pressure. [38] This new approach is more straightforward, but also more subject to potential public health risks; if the pumps fail, then loss of water pressure may result in entry of contaminants into the water system. [39] Most large water utilities do not use this approach, given the potential risks.[ dubious – discuss][ citation needed] 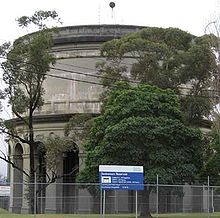 Bankstown Reservoir was built on reinforced concrete piers, which is one of the oldest of this type in the Sydney region. 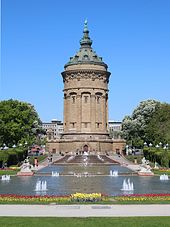 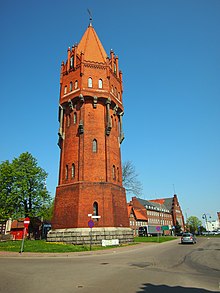 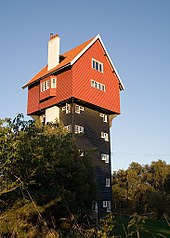 The House in the Clouds in Thorpeness functioned as the town's water tower from 1923 until 1977. 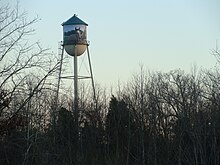 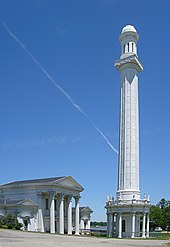 Louisville Water Tower, one of the few remaining standpipe water towers in the United States. It was completed in 1860.

There were originally over 400 standpipe water towers in the United States, but very few remain today, including: [42] [43] 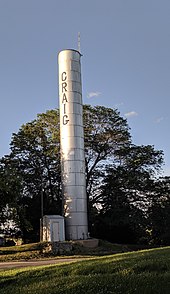