The Washington, D.C., Maryland, and Virginia [1] portions of the metropolitan area is sometimes referred to as the National Capital Region or the D.C. Area, particularly by federal agencies such as the military, [11] Department of Homeland Security, [12] and some local government agencies. The National Capital Region portion of the Washington Metropolitan Area is also colloquially known by the acronym "DMV" which stands for the "District of Columbia, Maryland, Virginia." [13] The area in the region that is surrounded by Interstate 495 referred to as being " Inside the Beltway". The city of Washington, which is at the center of the area, is referred to as "the District" because of its status as a federal district, which makes it not part of any state. The Virginian portion of the region is known as Northern Virginia and the Maryland portion of the region is sometimes called the Maryland-National Capital Region by some local authorities, but is not widely used by the general public. [14] [15] 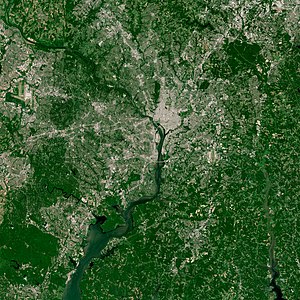 Counties or County equivalents and populations

Founded in 1957, the Metropolitan Washington Council of Governments (MWCOG) is a regional organization of 21 Washington-area local governments, as well as area members of the Maryland and Virginia state legislatures, the U.S. Senate, and the U.S. House of Representatives. MWCOG provides a forum for discussion and the development of regional responses to issues regarding the environment, transportation, public safety, homeland security, affordable housing, community planning, and economic development. [17]

The National Capital Region Transportation Planning Board, a component of MWCOG, is the federally designated metropolitan planning organization for the metropolitan Washington area. [18]

Consortium of Universities in the Washington Metropolitan Area

Formed in 1967 as an interstate compact between Maryland, Virginia, and the District of Columbia, the WMATA is a tri-jurisdictional government agency with a board composed of representatives from Maryland, Virginia, the District of Columbia, and the United States Federal government that operates transit services in the Washington Metropolitan Area.

The Metropolitan Washington Airports Authority (MWAA) is a multi-jurisdictional independent airport authority, created with the consent of the United States Congress and the legislature of Virginia to oversee management, operations, and capital development of Ronald Reagan Washington National Airport and Washington Dulles International Airport. [21]

Greater Washington Board of Trade

Founded in 1889, the Greater Washington Board of Trade is a network of regional businesses that work to advance the culture, economy, and resiliency of the Washington metropolitan area. [22] 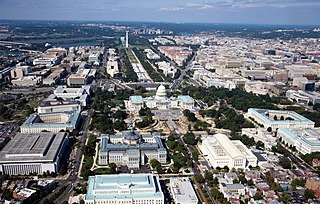 View of downtown Washington, with the skylines of Arlington and Tysons Corner in the distance.

The metropolitan area includes the following principal cities (not all of which are incorporated as cities; one, Arlington, is actually a county, and Bethesda, Reston, and Silver Spring are unincorporated CDPs.) [16]

The D.C. Metro has consistently leaned Democratic, only voting Republican once in Richard Nixon's landslide reelection in 1972. Since Bill Clinton was elected in 1992, Democratic candidates have easily won the area by double-digits.

The southern portion of the Capital Beltway along the Potomac River, featuring portions of Washington, D.C., Maryland, and Virginia.
Old Town Alexandria, Joint Base Anacostia-Bolling, and National Harbor, Maryland are visible.

The Washington metropolitan area has ranked as the highest-educated metropolitan area in the nation for four decades. [25] As of the 2006–2008 American Community Survey, the three most educated places with 200,000 people or more in Washington–Arlington–Alexandria by bachelor's degree attainment (population 25 and over) are Arlington, Virginia (68.0%), Fairfax County, Virginia (58.8%), and Montgomery County, Maryland (56.4%). [26] Forbes magazine stated in its 2008 "America's Best- And Worst-Educated Cities" report: "The D.C. area is less than half the size of L.A., but both cities have around 100,000 Ph.D.'s." [27]

The Washington, D.C. metro area has held the top spot in the American College of Sports Medicine's annual American Fitness Index ranking of the United States' 50 most populous metropolitan areas for two years running. The report cites, among other things, the high average fitness level and healthy eating habits of residents, the widespread availability of health care and facilities such as swimming pools, tennis courts, and parks, low rates of obesity and tobacco use relative to the national average, and the high median household income as contributors to the city's community health. [28]

In the 21st century, the Washington metropolitan area has overtaken the San Francisco Bay Area as the highest-income metropolitan area in the nation. [7] The median household income of the region is US$72,800. The two highest median household income counties in the nation – Loudoun and Fairfax County, Virginia – are components of the MSA (and #3 is Howard County, officially in Baltimore's sphere but strongly connected with Washington's); measured in this way, Alexandria ranks 10th among municipalities in the region – 11th if Howard is included – and 23rd in the entire United States. 12.2% of Northern Virginia's 881,136 households, 8.5% of suburban Maryland's 799,300 households, and 8.2% of Washington's 249,805 households have an annual income in excess of $200,000, compared to 3.7% nationally. [30]

Rosslyn is home to the tallest high-rises in the region, partly due to the District's height restrictions. As a result, many of the region's tallest buildings are outside the city proper. [32] [33]

The Washington, D.C. area has the largest science and engineering work force of any metropolitan area in the nation in 2006 according to the Greater Washington Initiative at 324,530, ahead of the combined San Francisco Bay Area work force of 214,500, and Chicago metropolitan area at 203,090, citing data from U.S. Census Bureau, the Bureau of Labor Statistics, Claritas Inc., and other sources. [7]

The Washington, D.C. area was ranked as the second best High-Tech Center in a statistical analysis of the top 100 Metropolitan areas in the United States by American City Business Journals in May 2009, behind the Silicon Valley and ahead of the Boston metropolitan area. [34] Fueling the metropolitan area's ranking was the reported 241,264 tech jobs in the region, a total eclipsed only by New York, Los Angeles, and the San Francisco Bay Area, as well as the highest master's or doctoral degree attainment among the 100 ranked metropolitan areas. [34] A Dice.com report showed that the Washington–Baltimore area had the second-highest number of tech jobs listed: 8,289, after the New York metro area with 9,195 jobs. [35]

Changes in house prices for the D.C. area are publicly tracked on a regular basis using the Case–Shiller index; the statistic is published by Standard & Poor's and is also a component of S&P's 10-city composite index of the value of the U.S. residential real estate market.

McLean ZIP code 22102 had the highest median home prices among ZIP codes within the Washington metropolitan area as of 2013. [36]

The economy of the Washington metropolitan region is characterized by significant wealth disparities, which were heightened by the Great Recession and the 2007–09 housing crisis, which adversely affected black and Hispanic households more than other households. [37] [38]

Although the median net worth for white D.C.-area households was 81 times that of black D.C.-area households, the two groups had comparable rates of business ownership (about 9%). The Urban Institute report suggests that this "may be driven by the presence of a large federal government and a local district government whose membership and constituents have been largely Black, coupled with government policies designed to increase contracting opportunities for minority-owned businesses." [37] [38] 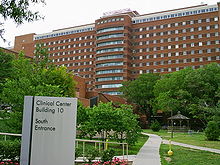 The Washington metropolitan area has a significant biotechnology industry; companies with a major presence in the region as of 2011 include Merck, Pfizer, Human Genome Sciences, Martek Biosciences, and Qiagen. [39] Additionally, many biotechnology companies such as United Therapeutics, Novavax, Emergent BioSolutions, Parabon NanoLabs and MedImmune have headquarters in the region. The area is also home to branch offices of many contract research organizations. Firms with a presence in the area include Covance, IQVIA, Charles River Laboratories, and ICON plc. The area's medical research is driven by government and non-profit health institutions, such as the Howard Hughes Medical Institute, J. Craig Venter Institute, and the National Institutes of Health.

The media industry is a significant portion of metropolitan Washington's economy. According to the Bureau of Labor Statistics, the Washington DC region has the second largest concentration of journalists and media personnel in the United States after the New York metropolitan area. [41] Washington's industry presence includes major publications with national audiences such as The Washington Post, U.S. News & World Report, and USA Today, as well as new media publishers such as Vox Media, RealClearPolitics, Axios, and Politico. A secondary portion of this market is made up of periodicals such as National Affairs, those by The Slate Group, Foreign Policy, National Geographic, The American Prospect, and those by Atlantic Media, including The Atlantic. There are also many smaller regional publications present, such as The Washington Diplomat, The Hill, Hill Rag, Roll Call, Washington City Paper and the Washington Examiner.

Tourism is a significant industry in the Washington metropolitan region. In 2015, more than 74,000 tourism-sector jobs existed in the District of Columbia, a record-setting 19.3 million domestic tourists visited the city, and domestic and international tourists combined spent $7.1 billion. [42] [43] The convention industry is also significant; in 2016, D.C. hosted fifteen "city-wide conventions" with an estimated total economic impact of $277.9 million. [42]

Tourism is also significant outside the District of Columbia; in 2015, a record-setting $3.06 billion in tourism spending was reported in Arlington, Virginia, and $2.9 billion in Fairfax County, Virginia. [44] A 2016 National Park Service report estimated that there were 56 million visitors to national parks in the National Capital Region, sustaining 16,917 and generating close to $1.6 billion in economy impact. [45]

The 2005 Base Realignment and Closure resulted in a significant shuffling of military, civilian, and defense contractor employees in the Washington, D.C., area. The largest individual site impacts of the time are as follows: [49]

BRAC 2005 was the largest infrastructure expansion by the Army Corps of Engineers since World War II, resulting in the Mark Center, tallest building they have ever constructed, as well as National Geospatial-Intelligence Agency Campus East, which at 2.4 million square feet is the largest building the Corps have constructed since the Pentagon. [50] 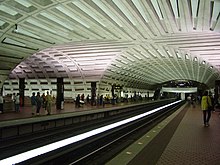 The Metro Center station on the Washington Metro

Listing of the professional sports teams in the Washington metropolitan area: