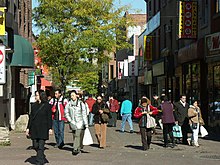 Walkability is a measure of how friendly an area is to walking. Walkability has health, environmental, and economic benefits. [1] Factors influencing walkability include the presence or absence and quality of footpaths, sidewalks or other pedestrian rights-of-way, traffic and road conditions, land use patterns, building accessibility, and safety, among others. [2] Walkability is an important concept in sustainable urban design. [3] Project Drawdown describes making cities walkable as an important solution in the toolkit for adapting cities to climate change: it reduces carbon emissions, and improves quality of life. [4]

One proposed definition for walkability is: "The extent to which the built environment is friendly to the presence of people living, shopping, visiting, enjoying or spending time in an area". [5] Factors affecting walkability include, but are not limited to:

Walkability is also examined based on the surrounding built environment. Reid Ewing and Robert Cervero's five D's of the built environment—density, diversity, design, destination accessibility, and distance to transit—heavily influence an area's walkability. [9] Combinations of these factors influence an individual's decision to walk. [10]

Before cars and bicycles were mass-produced, walking was the main way to travel. It was the only way to get from place to place for much of human history. [11] In the 1930s, economic growth led to increased automobile manufacturing. Cars were also becoming more affordable, leading to the rise of the automobile during the Post–World War II economic expansion. [12] The detrimental effects of automobile emissions soon led to public concern over pollution. Alternatives, including improved public transportation and walking infrastructure, have attracted more attention from planners and policymakers.

Walkability indices have been found to correlate with both Body Mass Index (BMI) and physical activity of local populations. [7] [13] Physical activity can prevent chronic diseases, such as cardiovascular disease, diabetes, hypertension, obesity, depression, and osteoporosis. [14] Thus for instance, an increase in neighborhood Walk Score has linked with both better Cardio metabolic risk profiles [15] and a decreased risk of heart-attacks. [16] The World Cancer Research Fund and American Institute for Cancer Research released a report that new developments should be designed to encourage walking, on the grounds that walking contributes to a reduction of cancer. [17] A further justification for walkability is founded upon evolutionary and philosophical grounds, contending that gait is important to the cerebral development in humans. [18]

Due to discrepancies between residents' health in inner city neighborhoods and suburban neighborhoods with similar walkability measures, further research is needed to find additional built environment factors in walkability indices. [19] 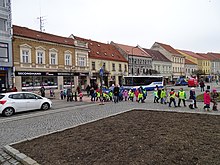 One of most important benefits of walkability is the decrease of the automobile footprint in the community. Carbon emissions can be reduced if more people choose to walk rather than drive or use public transportation. The benefits of less emissions include improved health conditions and quality of life, less smog, and less of a contribution to global climate change. [4]

Walkability has also been found to have many socioeconomic benefits, including accessibility, cost savings both to individuals and to the public, [20] student transport (which can include walking buses), increased efficiency of land use, increased livability, economic benefits from improved public health, and economic development, among others. [21] The benefits of walkability are best guaranteed if the entire system of public corridors is walkable - not limited to certain specialized routes. More sidewalks and increased walkability can promote tourism and increase property value. [22]

In recent years, the demand for housing in a walkable urban context has increased. The term " Missing Middle Housing" as coined by Daniel Parolek of Opticos Design, Inc., [23] refers to multi-unit housing types (such as duplexes, fourplexes, bungalow courts, and mansion apartments not bigger than a large house), which are integrated throughout most walkable Pre-1940s neighborhoods, but became much less common after World War II, hence the term "missing." These housing types are often integrated into blocks with primarily single-family homes, to provide diverse housing choices and generate enough density to support transit and locally-serving commercial amenities.

Auto-focused street design diminishes walking and needed "eyes on the street" [24] provided by the steady presence of people in an area. Walkability increases social interaction, mixing of populations, the average number of friends and associates where people live, reduced crime (with more people walking and watching over neighborhoods, open space and main streets), increased sense of pride, and increased volunteerism. 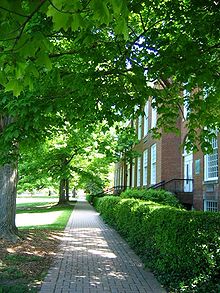 Many communities have embraced pedestrian mobility as an alternative to older building practices that favor automobiles. Reasons for this shift include a belief that dependency on automobiles is ecologically unsustainable. Automobile-oriented environments engender dangerous conditions to both motorists and pedestrians, and are generally bereft of aesthetics. [26] A tool that some American cities, like Cincinnati, OH, are employing to improve walkability is a type of zoning called Form-based coding. [27] [28] The COVID-19 pandemic gave birth to proposals for radical change in the organisation of the city, in particular Barcelona, being the elimination of the car and consequent pedestrianisation of the whole city one of the key elements, and proposing an inversion of the concept of sidewalk. [29] [30] [31]

There are several ways to make a community more walkable:

One way of assessing and measuring walkability is to undertake a walking audit. An established and widely used walking audit tool is PERS (Pedestrian Environment Review System) which has been used extensively in the UK. [37]

A simple way to determine the walkability of a block, corridor or neighborhood is to count the number of people walking, lingering and engaging in optional activities within a space. [38] This process is a vast improvement upon pedestrian level of service (LOS) indicators, recommended within the Highway Capacity Manual. [39] However it may not translate well to non-Western locations where the idea of "optional" activities may be different. [40] In any case, the diversity of people, and especially the presence of children, seniors and people with disabilities, denotes the quality, completeness and health of a walkable space. [41]

A newly developing concept is the transit time map (sometimes called a transit shed map), which is a type of isochrone map. [46] These are maps (often online and interactive) that display the areas of a metropolis which can be reached from a given starting point, in a given amount of travel time. Such maps are useful for evaluating how well-connected a given address is to other possible urban destinations, or conversely, how large a territory can quickly get to a given address. The calculation of transit time maps is computationally intensive, and considerable work is being done on more efficient algorithms for quickly producing such maps. [47] To be useful, the production of a transit time map must take into consideration detailed transit schedules, service frequency, time of day, and day of week. [48] [49] [50] [51] [52]