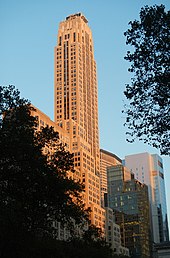 500 Fifth Avenue, the headquarters of W. W. Norton and Company.

W. W. Norton & Company is an American publishing company based in New York City. Established in 1923, it has been owned wholly by its employees since the early 1960s. The company is known for its Norton Anthologies (particularly The Norton Anthology of English Literature) and its texts in the Norton Critical Editions series, both of which are frequently assigned in university literature courses. [3]

The roots of the company date to 1923, when William Warder Norton founded the firm with his wife Mary Dows Herter Norton, and became its first president. In the 1960s, Mary Norton offered most of her stock to its leading editors and managers. [4] Storer D. Lunt took over in 1945 after Norton's death, and was succeeded by George Brockway (1957–1976), Donald S. Lamm (1976–1994), W. Drake McFeely (1994–2017), [5] and Julia A. Reidhead (2017–present). Reidhead was vice president and publishing director of Norton's College division and a former editor of the Norton Anthologies. [6]

Norton Anthologies collect canonical works from various literatures; perhaps the best known anthology in the series is the Norton Anthology of English Literature, which, as of 2018 [update], is in its 10th edition. Norton Anthologies offer general headnotes on each author, a general introduction to each period of literature, and annotations for every anthologized text.

Like Oxford World's Classics and Penguin Classics, Norton Critical Editions provide reprints of classic literature and in some cases, classic non-fiction works. However, unlike most critical editions, all Norton Critical Editions are sourcebooks that provide a selection of contextual documents and critical essays along with an edited text. Annotations to the text are provided as footnotes, rather than as endnotes.

The States and the Nation

The States and the Nation series was published in celebration of the United States Bicentennial. It comprised 51 volumes, one for each state and the District of Columbia. The series was administered by the American Association for State and Local History via a grant from the National Endowment for the Humanities. [7]