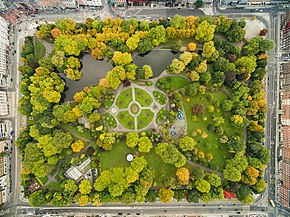 An urban park or metropolitan park, also known as a municipal park (North America) or a public park, public open space, or municipal gardens ( UK), is a park in cities and other incorporated places that offer recreation and green space to residents of, and visitors to, the municipality. The design, operation, and maintenance is usually done by government agencies, typically on the local level, but may occasionally be contracted out to a park conservancy, [1] "friends of" group, or private sector company.

Boston Common was purchased for public use grazing cows and as a military parade ground and dump in 1634. It first started to get recreational elements in 1728, arguably making it the first municipal park in the United States and the world, though cow grazing did not end until the 1830s.

Around the country, the predecessors to urban parks in the United States were generally rural cemeteries. The cemeteries were intended as civic institutions designed for public use. Before the widespread development of public parks, the rural cemetery provided a place for the general public to enjoy outdoor recreation amidst art and sculpture previously available only for the wealthy. [6]

A concert in Chicago's Lincoln Park circa 1907 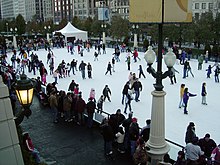 Parks can be divided into active and passive recreation areas. Active recreation is that which has an urban character and requires intensive development. It often involves cooperative or team activity, including playgrounds, ball fields, swimming pools, gymnasiums, and skateparks. Active recreation such as team sports, due to the need to provide substantial space to congregate, typically involves intensive management, maintenance, and high costs. Passive recreation, also called "low-intensity recreation" is that which emphasizes the open-space aspect of a park and allows for the preservation of natural habitat. It usually involves a low level of development, such as rustic picnic areas, benches, and trails. Passive recreation typically requires little management and can be provided at very low costs. Some open space managers provide nothing other than trails for physical activity in the form of walking, running, horse riding, mountain biking, snowshoeing, or cross-country skiing; or sedentary activity such as observing nature, bird watching, painting, photography, or picnicking. Limiting park or open space use to passive recreation over all or a portion of the park's area eliminates or reduces the burden of managing active recreation facilities and developed infrastructure. Many ski resorts combine active recreation facilities (ski lifts, gondolas, terrain parks, downhill runs, and lodges) with passive recreation facilities (cross-country ski trails).[ citation needed]

There is a form of an urban park in the UK (officially called a "recreation ground", but commonly called a "rec" by the public.) and some EU states that have mostly recreation grounds for kids to play within a park, but have a may duck pond (occasionally), large grassy zones not meant exclusively for sports, many trees and or several bushy places. When it occurs as a separate facility on its own, without any parkland, at a street corner or by a shop, the play facility is called a playground.