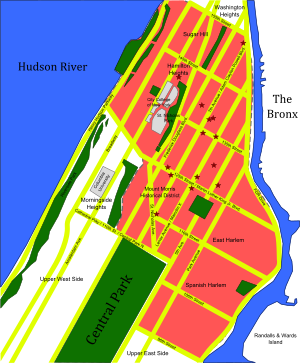 A map of Upper Manhattan. 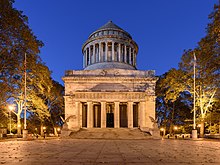 Upper Manhattan is generally taken to include the neighborhoods of Marble Hill, Inwood, Washington Heights (including Fort George, Sherman Creek and Hudson Heights), Harlem (including Sugar Hill, Hamilton Heights and Manhattanville), East Harlem, Morningside Heights, and Manhattan Valley (in the Upper West Side).

In the late 19th century, the IRT Ninth Avenue Line and other elevated railroads brought people to the previously rustic Upper Manhattan. Until the late 20th century it was less influenced by the gentrification that had taken place in other parts of New York over the previous 30 years.

Like other residential areas, Upper Manhattan is not a major center of tourism in New York City, although many tourist attractions lie within it, such as Grant's Tomb, the Apollo Theater, United Palace, and The Cloisters, Sylvia's Restaurant, the Hamilton Grange, the Morris–Jumel Mansion, Minton's Playhouse, Sugar Hill, Riverside Church, the National Jazz Museum in Harlem, and the Dyckman House, along with Fort Tryon Park, most of Riverside Park, Riverbank State Park, Sakura Park, and other parks.