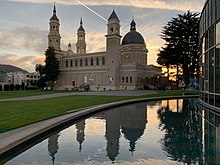 Founded by the Jesuits in 1855 as St. Ignatius Academy, USF started as a one-room schoolhouse along Market Street in what later became downtown San Francisco. Father Anthony Maraschi, S.J. (1820-1897) was the college's founder and first president, a professor, the college's treasurer, and the first pastor of St. Ignatius Church. Under Maraschi, St. Ignatius Academy received its charter to issue college degrees on April 30, 1859, from the State of California, and signed by governor John B. Weller. In that year, the school changed its name to St. Ignatius College.

A new building was constructed in 1862 to replace the first frame building. In June 1863, the university awarded its first Bachelor of Arts degree. In 1880, the college moved from Market Street to a new site on the corner of Hayes Street and Van Ness Avenue (currently occupied by the Davies Symphony Hall).

The third St. Ignatius College received moderate damage in the 1906 San Francisco earthquake, but was completely destroyed in the ensuing fire. The campus moved west, to the corner of Hayes and Shrader Streets, close to Golden Gate Park. It occupied a hastily constructed structure known as the Shirt Factory (for its resemblance to similar manufacturing buildings of the era) for the next 21 years. The college moved to its present site on Fulton Street in 1927, on the site of a former Masonic Cemetery. [1]

To celebrate its diamond jubilee in 1930, St. Ignatius College changed its name to the University of San Francisco. The change from college to university was sought by many alumni groups and by long-time San Francisco Mayor James Rolph Jr. [7]

A male-only school for most of its history, USF became fully coeducational in 1964, though women started attending the evening programs in business and law as early as 1927. In 1969, the high school division, already wholly separate from the university, moved to the western part of San Francisco and became St. Ignatius College Preparatory. In 1978, the university acquired Lone Mountain College. [7] October 15, 2005, marked the 150th anniversary of the university's founding. [8] In the fall of 2017, USF enrolled 11,080 undergraduate and graduate students in all of its programs housed in four schools ( Law, Management, Education, Nursing and Health Professions) and one college (Arts and Sciences). [9]

Aerial view of San Francisco, facing northeast, with USF in the foreground. 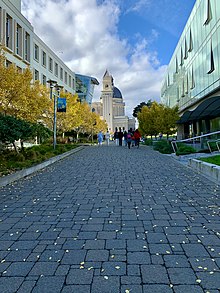 The Pleasanton Campus, founded in San Ramon in 1986, then moved to Pleasanton in 2012, offers a Bachelor's in Management (Degree Completion), the Master's in Nursing for the Registered Nurse, and the Master's in Teaching with the Single or Multiple Subject Teaching Credential. [22]

The Presidio Campus, founded at the San Francisco Presidio in 2003, offers the Master in Behavior Health, the Master of Public Health, and the Doctor of Psychology (PsyD) in Clinical Psychology. [23]

The Sacramento Campus, founded in 1975, offers the Bachelor of Science in Nursing, the Master of Public Health, the Master's in Counseling with an Emphasis in Marriage and Family Therapy, and the Master's in Teaching with the Single or Multiple Subject Teaching Credential. [24]

The San Jose Campus, founded in 1980, offers the Master's in Information Systems, the Master's in Teaching with the Single or Multiple Subject Teaching Credential, the Master's in Counseling with an Emphasis in Marriage and Family Therapy, and the RN to MSN Nursing/Clinical Nurse Leader. [25] 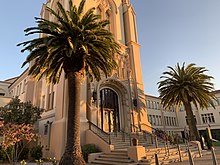 The Santa Rosa Campus, founded in 1989, offers the Master's in Counseling with an Emphasis in Marriage and Family Therapy, and the Master's in Teaching with the Single or Multiple Subject Teaching Credential. [26] 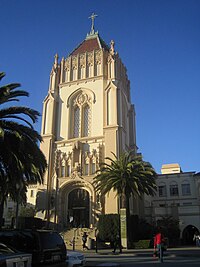 USF's faculty and librarians are unionized. The University of San Francisco Faculty Association, a local of the California Federation of Teachers, represents its members in all matters concerning wages, benefits, and enforcing the Collective Bargaining Agreement. The USFFA is consulted by the USF administration on matters affecting the working conditions of the faculty and librarians. Economics professor Michael Lehmann was the founding president of the Union in 1975.

USF is home to over 90 clubs and organizations [30] including academic/professional, governance, cultural, service, social, political, athletic, and special interest. The missions and goals of USF's student clubs and organizations are to provide programs and services that support students' leadership development and promote student engagement in co-curricular activities. [31] 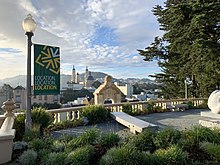 View from atop Lone Mountain to St. Ignatius Church on Main Campus.

The San Francisco Foghorn is the official student weekly newspaper and is sponsored by ASUSF. The Foghorn was founded in 1903, and was first called The Ignatian. In the 1930s when the college name was changed, the newspaper became the San Francisco Foghorn. The Foghorn has played a significant role on campus throughout the years, and has some notable alumni: Pierre Salinger, editor of the San Francisco Chronicle and Press Secretary for President John F. Kennedy; well-known author and historian Kevin Starr; and Leo T. McCarthy, former California Lieutenant Governor. In 1961 the Foghorn received the American Newspaper Publishers Association "Pacemaker Award". In 1998 Associated Collegiate Press named it "College Paper of the Year".

From 1977 USF radio station KUSF broadcast online until 2011 when its license was sold [35] to a Southern California-based classical radio station. KUSF had garnered international attention for its diverse musical programming, which varied from rock to hip hop to world music. [36] It received numerous awards [37] including public service awards [38] for its weekly community service series. USF's other radio station, KDNZ, is student-run. [39]

The University of San Francisco television station USFTV, founded in 2006 [40] and entirely student-run, is broadcast on Channel 35 in the dormitories and around campus, [41] with news, sports, and cultural programming. In 2008, USFtv students collaborated with Wyclef Jean to create a music video for his song, "If I Was President". [42]

The Ignatian is USF's annual literary magazine published every spring, with a wide array of content from philosophical pieces to personal essays, short fiction, poetry, and photography.

The College Players, founded in 1863, is considered one of the oldest student-run theater groups in the United States. [43] Their annual production of The Vagina Monologues gives all its proceeds to women's charities in the Bay Area. [44]

ASUSF Voices, in collaboration with the Performing Arts Department, contains a variety of choral ensembles, including jazz and popular. [45] The USF Contemporary Mass Ensemble (vocal and instrumental) are USF alumni who perform at Sunday Masses in St. Ignatius Church. [46] The USF dance program is affiliated with the Performing Arts and Social Justice Major. Students can enroll in traditional and modern dance classes and participate in the USF Dance Ensemble which includes, under professional choreographers. [47]

All social sororities and fraternities recognized by the university must participate in the Greek Council, which tends to the development of these organizations and their members. [48] Chapters have some common mixers and socials, Thanksgiving potluck, Christmas clothing drive, Homecoming, and Greek Games. [49]

Notable students marked the early years of student diversity at the USF. Chan Chung Wing, whose parents had immigrated from near Canton, was in the first law class at then St. Ignatius College of Law. In 1929, the Filipino Ignatians was founded. In 1930, the African American Isaiah Fletcher was a starting tackle on the football team, years before most colleges became integrated. In 1936, Earl Booker, another African American, won the Intercollegiate Boxing Championship. [53]

In the 2019-2020 financial aid year, 82.0% of freshmen were given financial aid and/or scholarships at University of San Francisco, averaging $23,895 per person, placing USF in the top 20th percentile of all accredited colleges and universities nationwide. In addition to scholarships, 26.0% of first year students received federal grant aid, for an average of about $5,970 per person. [59]

USF competes in NCAA Division I and is a charter member of the West Coast Conference, along with local rivals Santa Clara University and Saint Mary's College of California. Sports offered are men's and women's basketball, cross country, golf, soccer, tennis, track and field, as well as men's baseball and women's volleyball and sand volleyball. USF's mascot is the Don and its colors are green and gold.

Athletics at USF dates back to its founding in 1855, when founder Anthony Maraschi, S.J., organized ball games as recreation for the first students. Intercollegiate competition dates back to 1907, when then St. Ignatius College began playing organized baseball, basketball, and rugby against other local colleges and high schools. Rivalries with neighboring Santa Clara University and Saint Mary's College of California have their origins in this early period. [7] 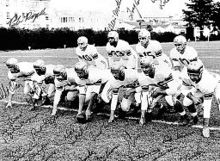 The 1951 University of San Francisco Dons football team, coached by Joe Kuharich, went undefeated with a record of 9-0, and produced nine future NFL players. Five became NFL Pro-Bowlers, and Gino Marchetti, Ollie Matson, and Bob St. Clair later were inducted into the Pro Football Hall of Fame – a record for one college team. Also the team's Burl Toler became the first African American official in the NFL. [61] Future NFL Commissioner Pete Rozelle played a role as the Dons' Athletic Publicist. At the height of their success, due to the team having two African-American star players, Ollie Matson and Burl Toler, they were not invited to play in any of the college football bowl games hosted by the SEC ( Southeastern Conference). [62] The team, less Toler and Matson, was invited to the Orange Bowl but declined. Guard Dick Columbini said, "'No, we're not going to leave ‘em at home’ ... ‘We're going to play with ‘em or we’re not going to play.’" [61] The USF Athletic Department was forced to drop its football program in 1952, due to a deficit in department funds. 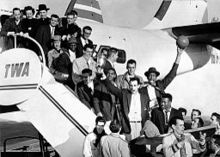 The men's basketball program won three national championships: the 1949 NIT Championship, with Don Lofgran as MVP, and the 1955 and 1956 NCAA National Championships, going undefeated in the 1956 season. Led by NBA Hall of Famers Bill Russell and K.C. Jones, the 1956 Dons became the first undefeated team to win a national championship, winning a then-record 60 games in a row from 1954 to 1956 before losing an exhibition game to the USA Men's Olympic Basketball team. Also of note, the 1954-1955 USF basketball teams became the first major college or university basketball team to win a national title with three African American starters (Russell, Jones, and Hal Perry). [7]

The soccer program began at USF in 1931, and they succeeded from the start, winning five titles from 1932 to 1936. The team captain was All-American Gus Donoghue, who returned to the university as head coach in 1946, winning several titles, including a co-championship with Penn State in 1949.

At Donoghue's retirement in 1960, Stephen Negoesco, All-American and Holocaust survivor took over, having played under Donoghue in the 50s. He coached the team from 1962 to 2000, and led them to 540 wins and four national championships (1966, 1975, 1976, and 1980). Negoesco was inducted into the National Soccer Hall of Fame in 2003, having set a US record for games won in intercollegiate soccer competition.