NRHPs by college or university

In Lorman, Mississippi, this university has 2 (1 NHL):

In Newton, Massachusetts has:

University of the Arts

In Berkeley, CA, has

In La Jolla, California has

In Northfield, Minnesota has 4:

Additionally, the 116th Street–Columbia University station is listed on the NRHP as part of the New York Subway System Multiple Property Submission.

In Moorhead, Minnesota has 1:

In addition, East Robert Hall, Roberts Hall, and Stone Hall are former buildings that are still listed on the National Register despite having been demolished. See Cornell University#Historic Sites for how these are described in the article about the university.

In Mitchell, South Dakota, the entire university, apparently, is NRHP-listed. 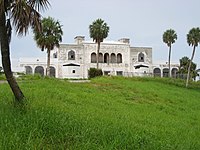 in Jensen Beach, Florida The former campus, which was previously the campus of Saint Joseph College of Florida, contains two NRHPs, one sitting on top of the other:

In addition, Garden Club of Georgia Museum–Headquarters House, Founder's Memorial Garden and Gov. Wilson Lumpkin House are on the campus and may be part of the University of Georgia.

In St. Peter, Minnesota has 1:

University of Illinois at Chicago

University of Illinois at Urbana–Champaign

In Urbana and Champaign, Illinois

University of the Incarnate Word

University of Maine at Orono

Moore College of Art and Design

University of North Carolina at Pembroke

University of the Ozarks

In Pittsburgh, Pennsylvania has 4 NRHPs:

University of Puerto Rico at Mayagüez

University of the Sacred Heart

The entire campus of the now closed college is a contributing property to the Harpers Ferry National Historical Park.

University of Tennessee at Chattanooga

University of Texas at Austin

In Schenectady, NY has 1 NHL:

In Middletown, CT has 2 NHLs and several other NRHPs:

(Wesleyan University may also own some properties in Broad Street Historic District or other historic districts in Middletown).

College of William and Mary

In New Haven, Connecticut has 4 NHLs, and an NRHP historic district:

Grove Street Cemetery and Mory's, both listed on the NRHP, are on the campus but are independent of Yale.