Trillium (trillium, wakerobin, toadshade, tri flower, birthroot, birthwort, and sometimes "wood lily") is a genus of about fifty flowering plant species in the family Melanthiaceae. Trillium species are native to temperate regions of North America and Asia, [3] [4] with the greatest diversity of species found in the southern Appalachian Mountains in the southeastern United States. [5] [6]

Plants of this genus are perennial herbs growing from rhizomes. There are three large leaf-like bracts arranged in a whorl about a scape that rises directly from the rhizome. There are no true aboveground leaves but sometimes there are scale-like leaves on the underground rhizome. The bracts are photosynthetic and are sometimes called leaves. The inflorescence is a single flower with three green or reddish sepals and three petals in shades of red, purple, pink, white, yellow, or green. At the center of the flower there are six stamens and three stigmas borne on a very short style, if any. The fruit is fleshy and capsule-like or berrylike. The seeds have large, oily elaiosomes. [3] [4]

In 1753, Swedish botanist Carl Linnaeus established the genus Trillium by recognizing three species, Trillium cernuum, Trillium erectum, and Trillium sessile. [9] The type specimen Trillium cernuum described by Linnaeus was actually Trillium catesbaei, [10] an oversight that subsequently led to much confusion regarding the type species of this genus.

Initially the Trillium genus was placed in the family Liliaceae. In the nineteenth and early twentieth centuries it was sometimes placed in a smaller family, Trilliaceae. [11] By 1981 Liliaceae had grown to about 280 genera and 4,000 species. [12] As it became clearer that the very large version of Liliaceae was polyphyletic, some botanists preferred to place Trillium and related genera into that separate family. Others defined a larger family, Melanthiaceae, for a similar purpose, but included several other genera not historically recognized as close relatives of Trillium. This latter approach was followed in 1998 by the Angiosperm Phylogeny Group, which assigned the genus Trillium, along with its closest relatives, Paris and Pseudotrillium, to the family Melanthiaceae. [13] However, other taxonomists have since preferred to break up the heterogenous Melanthiaceae into several smaller monophyletic families, each with more coherent morphological features, returning Trillium to a resurrected Trilliaceae. [14]

All names used in this section are taken from the International Plant Names Index. [20] As of February 2022 [update], Plants of the World Online (POWO) accepts 49 species and 5 named hybrids, [2] all of which are listed below. The geographical locations are taken from POWO and the Flora of North America, [3] except where noted.

The Trillium genus has traditionally been divided into two subgenera, Trillium subgenus Trillium and Trillium subgenus Sessilium, based on whether the flowers are pedicellate or sessile with respect to their attachment to the apex of the scape. [21] [22] The former is considered the more primitive group. [23] [24] [3] Until recently the sessile-flowered subgenus was known by the name Phyllantherum, but the name Sessilium has precedence and should be used instead. [25] T. subg. Sessilium has been shown to be a monophyletic group by molecular systematics but its segregation renders the remaining T. subg. Trillium paraphyletic. [26]

In 1830, Rafinesque placed Trillium catesbaei into subgenus Delostylium. [27] [28] Since then Trillium persistens and all members of the Trillium pusillum species complex (including Trillium georgianum and Trillium texanum) have been added to this subgenus, [29] [30] which has been shown to be monophyletic. [31] Members of T. subg. Delostylium Raf. are distinguished from other pedicellate-flowered trilliums by the presence of a definite style. The word Delostylium means "with a small but conspicuous style". [32]

Since all four species groups are monophyletic, this leads to a four-part concept of Trillium that sharply contrasts with the traditional pedicellate vs. sessile dichotomy outlined previously. [33]

This group of species has pedicellate flowers (on a short stalk) with three separate stigmas (no style) and solid green leaves (not mottled). Species in this group are distributed across North America and Asia, as indicated below. Hybrids are common within this group (the only group of pedicellate-flowered trilliums with natural hybrids).

This group of species has pedicellate flowers (on a short stalk) and solid green leaves (except T. ovatum on the west coast of California, which occasionally has mottled leaves). The stigmas are fused together at their bases (basally connate) but lack a definite style. Species in this group are distributed across North America (but not Asia). These flowers were and still are consumed and used by Native Americans in different regions of America.

This subgenus has pedicellate flowers (except for one variety of T. pusillum) with a definite style and solid green leaves (not mottled). Distribution is restricted to the southeastern and south central United States.

This subgenus (previously known as T. subg. Phyllantherum) includes species with sessile flowers (no flower stalk), erect petals (except in T. stamineum), and mottled leaves (except in T. petiolatum and occasionally in plants of other sessile-flowered species). [22]

The following pair of taxa are widely accepted but do not fit into any of the above groups since they are markedly different from other Trillium species. There is evidence to support the segregation of these species into a separate genus (Trillidium) but the proposal is controversial.

The following taxon is an intergeneric hybrid:

As of February 2022 [update], Plants of the World Online does not accept these taxa:

The following taxon is of historical interest:

A fully general dichotomous key requires a mature, flowering plant. [3] [62] [63] [64] The first step is to determine whether or not the flower sits on a pedicel, which determines the subgenus. (Any mature plant may be identified to this extent, even if it is not in bloom.) Identification proceeds based on flower parts, leaves, and other characteristics. A combination of characteristics is usually required to identify the plant.

Identification of a non-flowering, non-fruiting plant with bare leaves may be difficult. Although some species of Trillium have petioles (leaf stalks) and/or distinctive leaf shapes, these features are seldom sufficient to identify the plant down to the species level.

In eastern North America, jack-in-the-pulpit ( Arisaema triphyllum) is often mistaken for bare-leaved Trillium. Both species are about the same height with trifoliate leaves but the former lacks 3-way rotational symmetry and has leaf veins unlike those of Trillium.

Trilliums are myrmecochorous, that is, ants act as agents of seed dispersal. Each seed of a ripe fruit has a white fleshy appendage called an elaiosome. Ants are attracted to the elaiosome, so much so they often bore holes into the fruit instead of waiting for it to drop off on its own. [65] The ants carry the seeds back to their nest where they eat the elaiosomes and discard the seeds. Here the seeds eventually germinate, an average of about 1 meter away from the parent plant.

For example, the seeds of Trillium camschatcense and T. tschonoskii are collected by ant species Aphaenogaster smythiesi and Myrmica ruginodis. [66] Sometimes beetles interfere with the dispersal process by eating the elaiosomes, which makes the seeds less attractive to ants.

Yellow jackets ( Vespula spp.) and other wasps are similarly attracted to elaiosomes. The wasps carry off the seeds and feed on the elaiosomes an average of about 1.4 meters away from the parent plant. Yellow jackets are documented seed dispersers for at least three species of Trillium (T. catesbaei, T. cuneatum, T. undulatum). [67]

As of February 2022 [update], Plants of the World Online recognizes five named hybrids, [2] four in Asia and one in North America. Three of the Asian hybrids, T. × hagae, T. × miyabeanum, and T. × yezoense, are well studied, [68] but little is known about the Asian hybrid T. × komarovii. Based on its synonyms, [69] one of its parents may be T. camschatcense.

The only named hybrid in North America is T. × crockerianum. As originally described, its parents are Trillium ovatum and Trillium rivale, [70] but the latter species is now a member of genus Pseudotrillium, and so T. × crockerianum has become an intergeneric hybrid.

In 1982, Haga and Channell crossed the Asiatic species Trillium camschatcense with several North American species. Of those, the crosses with T. erectum, T. flexipes, and T. vaseyi produced solid, seemingly viable seed. Seeds of the cross between T. camschatcense and T. erectum flowered in 9 to 10 years. [71]

Various Trillium species are susceptible to a greening disorder caused by bacterial organisms called phytoplasmas that alter the morphology of infected plants. [72] Symptoms of phytoplasma infection include abnormal green markings on the petals (floral virescence), extra leaves ( phyllody), and other abnormal characteristics. [73] Infected populations occur throughout the species range but are prevalent in Ontario, Michigan, and New York. [74]

For many years, this condition was thought to originate from mutation, and so many of these forms were given taxonomic names now known to be invalid. In 1971, Hooper, Case, and Meyers used electron microscopy to detect the presence of mycoplasma-like organisms (i.e., phytoplasmas) in T. grandiflorum with virescent petals. The means of transmission was not established but leafhoppers were suspected. [75] As of November 2021 [update], the insect vector for Trillium greening disorder is unknown.

Phytoplasmas were positively identified in T. grandiflorum and T. erectum in Ontario in 2016. Phylogenetic analysis supported the grouping of the phytoplasmas isolated from infected plants as a related strain of ' Candidatus Phytoplasma pruni' (subgroup 16SrIII-F) with 99% sequence identity. [76] This subgroup of phytoplasmas is associated with various other diseases, including milkweed yellows, Vaccinium witches' broom, and potato purple top. [77] 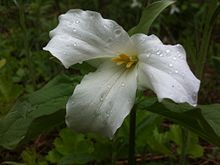 Picking parts off a trillium plant can kill it even if the rhizome is left undisturbed. [78] Some species of trillium are listed as threatened or endangered and collecting these species may be illegal. Laws in some jurisdictions may restrict the commercial exploitation of trilliums and prohibit collection without the landowner's permission. In the US states of Michigan [78] and Minnesota [79] it is illegal to pick trilliums. In New York it is illegal to pick the red trillium. [80]

In 2009, a Private Members Bill was proposed in the Ontario legislature that would have made it illegal to in any way injure the common Trillium grandiflorum (white trillium) in the province (with some exceptions), however the bill was never passed. [81] The rare Trillium flexipes (drooping trillium) is also protected by law in Ontario, because of its decreasing Canadian population. [82]

High white-tailed deer population density has been shown to decrease or eliminate trillium in an area, particularly white trillium. [83]

Some species are harvested from the wild to an unsustainable degree. This is particularly dire in the case of T. govanianum, whose high selling price as a folk medicine has motivated harvesters to destroy swathes of ecologically sensitive Himalayan forests, causing mudslides. [84]

Several species contain sapogenins. They have been used traditionally as uterine stimulants, the inspiration for the common name birthwort. In a 1918 publication, Joseph E. Meyer called it "beth root", probably a corruption of "birthroot". He claimed that an astringent tonic derived from the root was useful in controlling bleeding and diarrhea. [85]

Citizen scientists regularly report observations of Trillium species from around the world. T. grandiflorum, T. erectum, and T. ovatum (in that order) are the most often observed Trillium species. [87]

Trillium is the literary magazine of Ramapo College of New Jersey, which features poetry, fiction, photography, and other visual arts created by Ramapo students. [88]

In Mexican LGBT culture, the trillium is included as a symbol on their version of the bisexual pride flag. [89][ irrelevant citation]