The Tribeca Festival is an annual film festival organized by Tribeca Productions. It takes place each spring in New York City, showcasing a diverse selection of film, episodic, talks, music, games, art, and immersive programming. Tribeca was founded by Robert De Niro, Jane Rosenthal, and Craig Hatkoff in 2002 to spur the economic and cultural revitalization of lower Manhattan following the 9/11 attacks on the World Trade Center. Until 2021, the festival was known as the Tribeca Film Festival.

Each year the festival hosts over 600 screenings with approximately 150,000 attendees, and awards independent artists in 23 juried competitive categories. [1] 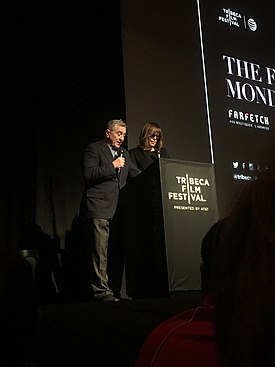 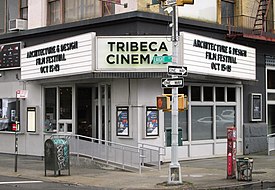 The marquee of Tribeca Cinemas 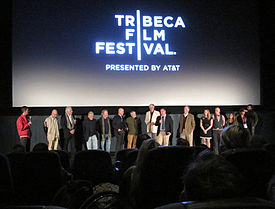 After the premiere of a documentary film at the 2015 Tribeca Film Festival, subjects and creators onstage

The Tribeca Film Festival was founded in 2002 by Jane Rosenthal, Robert De Niro, and Craig Hatkoff, in response to the September 11 attacks on the World Trade Center and the consequent loss of vitality in the Tribeca neighborhood in Lower Manhattan. [2] The inaugural festival launched after 120 days of planning with the help of more than 1,300 volunteers. It was attended by more than 150,000 people [3] and featured several up-and-coming filmmakers. The festival included juried narrative, documentary and short film competitions; a restored classics series; a best of New York series curated by Martin Scorsese; 13 major panel discussions; an all-day family festival; and the premieres of studio films Star Wars: Episode II – Attack of the Clones, [4] About A Boy, [5] the American remake of Insomnia, Divine Secrets of the Ya-Ya Sisterhood, and The League of Extraordinary Gentlemen.

The 2003 festival brought more than 300,000 people. [3] The festival showcased an expanded group of independent features, documentaries and short films from around the world, coupled with studio premieres, panel discussions, music and comedy concerts, a family festival, sports activities, and outdoor movie screenings along the Hudson River. The family festival featured children's movie screenings, storytelling, family panels, workshops, and interactive games culminating in a daylong street fair that drew a crowd estimated at 250,000 people. [6]

At the end of 2003, De Niro purchased the theater at 54 Varick Street which had housed the recently closed Screening Room, an art house that had shown independent films nightly, [7] renaming it the Tribeca Cinema. It became one of the venues of the festival.

In an effort to serve its mission of bringing independent film to the widest possible audience, in 2006, the festival expanded its reach in New York City and internationally. In New York City, Tribeca hosted screenings throughout Manhattan as the festival's 1,000-plus screening schedule outgrew the capacity downtown. Internationally, the Festival brought films to the Rome Film Festival. As part of the celebrations in Rome, Tribeca was awarded the first-ever "Steps and Stars" award, presented on the Spanish Steps. A total of 169 feature films and 99 shorts were selected from 4,100 film submissions, including 1,950 feature submissions—three times the total submissions from the first festival in 2002. The festival featured 90 world premieres, nine international premieres, 31 North American premieres, 6 U.S. premieres, and 28 New York City premieres.

In 2009, Rosenthal, Hatkoff and De Niro were named number 14 on Barron's list of the world's top 25 philanthropists for their role in regenerating TriBeCa's economy after September 11. [8]

In 2011, L.A. Noire became the first video game to be recognized by the Tribeca Film Festival. In 2013, Beyond: Two Souls, featuring Elliot Page and Willem Dafoe, became only the second game to be premiered at the festival.

The 19th Tribeca Film Festival, originally scheduled for April 15–26, 2020, was cancelled due to the COVID-19 pandemic. In the weeks and months that followed, Tribeca launched several digital offerings to highlight filmmakers and creators who had hoped to premiere their latest works at the spring gathering. It provided a secure digital platform for 2020 Festival films seeking distribution to be viewed by press and industry and hosted a virtual gathering space for Tribeca N.O.W. Creators Market. [9]

In response to the global pandemic, Tribeca organized We Are One in partnership with YouTube, a free 10-day digital festival that provided entertainment and connection for audiences at home and raised international COVID-19 relief funds. The program was co-curated by 21 of the top international film festivals including Cannes, Sundance, TIFF and Venice and showcased over 100 hours of shorts, features, talks and music to an audience of 1.9 million people in 179 countries. [9]

In July 2020, Tribeca launched one of the first large scale pop-up drive-in series across the country to provide audiences with entertainment in a safe, socially-distanced environment. Screenings took place at the Rose Bowl in Pasadena, CA, Dallas Cowboys AT&T Stadium in Arlington, Texas, Orchard Beach in the Bronx neighborhood of New York and Nickerson Beach in Nassau County, New York. The series employed local production staff and partnered with small food businesses who had been impacted by the lockdown. [10]

On August 7, 2020, organizers announced that the 20th anniversary edition of the festival was to be held from June 9 to June 20, 2021, with a dedicated space to celebrate films whose premieres were not able to take place in the festival that was cancelled in 2020. [11] In a first for the festival, Tribeca also hosted community screenings — in both indoor and outdoor venues — in all five New York City boroughs. [12]

The festival added a dedicated video games category beginning with the 2021 event. Games nominated are presented in online presentations during the Festival, similar to film screenings. [13] The festival dropped "Film" from its name. [14]

The Tribeca Games Award honors an unreleased video game, recognizing "its potential for excellence in art and storytelling through design, artistic mastery and highly immersive worlds."