From Wikipedia, the free encyclopedia
City in California in the United States

Tracy is the second most populated city in San Joaquin County, California, United States. The population was 93,000 at the 2020 census. Tracy is located inside a geographic triangle formed by Interstate 205 on the north side of the city, Interstate 5 to the east, and Interstate 580 to the southwest.

Until the 1760s, the area that is now the city of Tracy was long populated by the Yokuts ethnic group of loosely associated bands of Native Americans and their ancestors. They lived on hunting and gathering foods, game and fish from the area, including its local rivers and creeks. After encountering the Spanish colonists, the Yokuts suffered from new infectious diseases, which caused social disruption, as did the Spanish efforts to impress them for labor at missions, specifically Mission San Jose. Mexican and American explorers later came into the area, pushing the Yokuts out. [10] The Yokut people are still around to this day and live in small groups with a total of about 2,600 people identifying under the Yokut name. Along with the Yokuts, another language group of Native Americans found near the Tracy area are referred to as the Mono. Today the Mono peoples numbers are around 1,800 people. [11]

Tracy is a railroad town that came from the mid-19th century construction, mainly by Chinese laborers, of Central Pacific Railroad rail lines running from Sacramento through Stockton to the San Francisco Bay Area, beginning 1868 and ending September 1878 with the opening of a new branch and junction. [12] A number of small communities sprang up along these lines at designated station sites, including one at the junction named for railroad director J. J. Tracy. [13]

Incorporated in 1911, Tracy grew rapidly and prospered as the center of an agricultural area, even when larger railroad operations began to decline in the 1950s. Competition with trucking and automobiles resulted in widespread railroad restructuring. Tracy is part of the San Jose-San Francisco-Oakland, CA Combined Statistical Area, an extension of the Bay Area.

In December 1969, the town of Tracy was the host of the Altamont Free Concert, held at the (now closed) Altamont Raceway Park. An estimated 300,000 people gathered at the speedway infield in an event that was plagued by violence among attendees, many of whom were drunk or drugged. Artists featured included the internationally known Rolling Stones, Santana, Jefferson Airplane, The Flying Burrito Brothers and Crosby, Stills, Nash & Young. 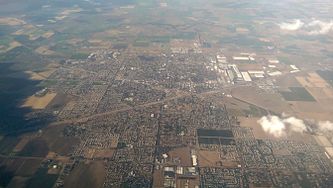 Tracy in 2016. Note large warehouses at east side of the city. 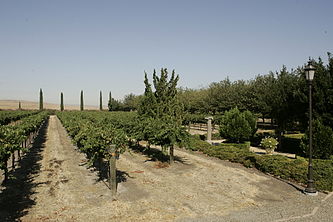 Located in the Central Valley, Tracy is near both fertile and (due to a region of hills west of Tracy) infertile agricultural lands. Tracy has a Mediterranean climate.

Some of this land (in the east and mostly north of Tracy because of the moist Delta river system) has come under increasing development pressure. The San Francisco Bay Area's vigorous population growth has spilled over into the Tracy area as well as other locations, such as the new town of Mountain House. Tracy passed Measure A in 1990 in an attempt to contain and limit development.

In an effort to reduce environmental impacts of the city, it launched the Emerald Tracy Project in September 2009. City spokesman Matt Robinson said that if it succeeds, Tracy will be the second city after Riverside, California to satisfy the state's goal for sustainable communities.

On August 7, 1998, a tire fire ignited at S.F. Royster's Tire Disposal south of Tracy at 29425 South MacArthur Drive, near Linne Road. The tire dump held more than 7 million illegally stored tires and was allowed to burn for over two years before it was extinguished. Allowing the fire to burn was considered to be a better way to avoid groundwater contamination than putting it out. [14] The cleanup of chemicals released by the fire cost $16.2 million. The chemicals were found to have contaminated groundwater in the region after all. [15] [16]

Tracy City Hall and Jail was first commissioned by the city in November-December 1899 and completed in March 1900 after the original Jail and city hall was burnt down. This historical site served as the local governments place of operation during Tracy's formative years, which makes this building an integral part of Tracy's foundation. The structure is made of a simple brick building that is 24 by 43 feet in dimension located on 25 West Seventh Street, and was built by J.F. Hoerl. In the historical resources inventory, the Tracy City Hall and Jail was one of only fourteen buildings to receive and "exceptional" rating. [21]

The Tracy Inn was originally opened in 1927 with a total of 60 rooms on the second floor and is still located on 24 West Eleventh Street. The building has a very transitional architectural style befitting the 1920s with a classic Spanish Colonial revival and modern styles mixed together. The building was designed by the Oakland firm of Slocomhe and Tuttle. In 1949, after the ownership changed, the Tracy Inn suffered with a fire that burned the only original blue prints of the building. Even with this loss the owner was still able to recreate the original look of the Tracy Inn. The iconic sign of the Tracy Inn has also been replaced in 1945. [22] 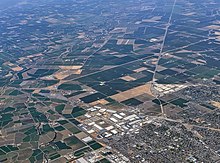 Aerial view of the northeastern part of Tracy (lower right) and land to the south and east, in 2021. The warehouse distribution and fulfillment centers in the northeast corner of the city are at lower center. Behind and to the right is the Defense Logistic Agency's Tracy Defense Distribution Depot (which is just outside Tracy to the east).
See also: Government of San Joaquin County, California

The California Department of Corrections and Rehabilitation operates the Deuel Vocational Institution, a state prison, in unincorporated San Joaquin County, near Tracy.

The Tracy Defense Distribution Depot began its operations back in 1942, and has since been a main supply for American troops for all major wars since World War II. The distribution depot has around 30 warehouses and is a major employer for the area, just under Safeway. [25] 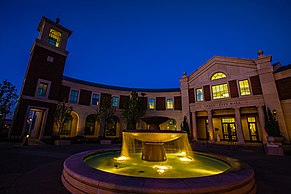 Greyhound, Tracer, and SJRTD all connect with taxis, bike stations, and parking at the Tracy Transit Center, a transit station built in 2010.

Amtrak Thruway buses connect serve the city's bus station to the area with six daily trips to the South Bay and two to San Francisco, all of which stop at BART and job centers in Livermore.

To meet the future transportation needs, which will connect San Joaquin Valley with the Bay Area, there are two Transit Stations in Tracy. One is located downtown and is designated for bus service, but is being considered as a possible site for California High-Speed Rail.

South Tracy offers the Altamont Corridor Express (ACE) service at Tracy (ACE station), which provides commuter rail transportation to the Bay Area and connects with VTA in San Jose, BART via shuttle in Pleasanton and Fremont, in addition to Amtrak train in Santa Clara and San Jose.

Interstate 205 passes along the north side of the city and connects the nearby Interstates 580 to the west and 5 on the east, with the three Interstates forming a triangle around much of the city. Business Loop 205 runs through the center of Tracy along 11th Street, formerly a portion of U.S. Highway 50. In addition, the northern terminus of State Highway 33 is located at South Bird Road and Interstate 5 southeast of Tracy.

Tracy is served by Tracy Municipal Airport, located south of the city. It serves general aviation; there is no scheduled airline service from the airport.