Times Square is the hub of the Broadway theater district and a major cultural venue in Midtown Manhattan. The pedestrian intersection also has one of the highest annual attendance rates of any tourist attraction in the world, [1] estimated at 60 million including daytrippers. [2]

New York City received a ninth consecutive annual record of approximately 65.2 million tourists in 2018, one of the world’s busiest tourist attractions, [1] counting not just overnight visitors but anyone visiting for the day from over 50 miles away, including commuters. Overall the city welcomed 37.9 million visitors who stayed overnight in 2018, of which 13.6 million were international. [3] Major destinations include the Empire State Building, Ellis Island, the Statue of Liberty on Liberty Island, Broadway theatre productions, Central Park, Times Square, Coney Island, the Financial District, museums, and sports stadiums. Other major visitor activities include luxury shopping along Fifth and Madison Avenues; entertainment events such as the Tribeca Film Festival; Randalls Island music festivals such as Governors Ball, Panorama and Electric Zoo; and free performances in Central Park at Summerstage and Delacorte Theater. Many New York City ethnic enclaves, such as Jackson Heights, Flushing, and Brighton Beach are major shopping destinations for first and second generation Americans.

New York City has over 28,000 acres (110 km2) of parkland and 14 linear miles (22 km) of public beaches. [4] [5] Manhattan's Central Park, designed by Frederick Law Olmsted and Calvert Vaux, is the most visited city park in the United States. [6] Prospect Park in Brooklyn, also designed by Olmsted and Vaux, has a 90-acre (36 ha) meadow. [7] Flushing Meadows–Corona Park in Queens, the city's fourth-largest, was the setting for the 1939 World's Fair and 1964 World's Fair.

Double-decker tour buses and boats with tour guides bring sightseers to various parts of Manhattan and other boroughs having a robust infrastructure also in the charter bus industry with thousands of companies providing chartered transportation services for groups visiting the city the most known ones are Academy, Bus Charters VIP, Leprechaun, Peter Pan, Megabus, while pedicabs and horse cabs serve those with a taste for more personal service. More adventurous tourists rent bicycles at neighborhood shops or along the Manhattan Waterfront Greenway or simply walk, which is often the quickest way to get around in congested, busy commercial districts and a way to appreciate street life.

Many visitors investigate their genealogy at historic immigration sites such as Ellis Island and the Statue of Liberty. Other tourist destinations include the Empire State Building, for 41 years the world's tallest building after its construction in 1931, Radio City Music Hall, home of The Rockettes, a variety of Broadway shows, the Intrepid Sea-Air-Space Museum, housed on a World War II aircraft carrier, and city landmarks such as Central Park, one of the finest examples of landscape architecture in the world. New York City has encouraged tourist shopping by eliminating its sales tax on clothing and footwear. In the past, the World Trade Center was an important tourist destination before the September 11 attacks, which devastated the city and its tourist industry. Tourists were scarce for months, and it took two years for the numbers to fully rebound with fewer international, but more domestic visitors, due in part to an emphasis on "patriotic tourism". [12] The World Trade Center site itself became an important place to visit, and visits to the World Trade Center have increased, especially with openings of new buildings on the site in recent years.

New York City law requires all guides to be licensed by the Department of Consumer Affairs. A professional trade organization of licensed tour guides in the city is GANYC (Guides Association of New York City), which represents just 10.9% of all licensed tour guides in the city. [13] Potential licensees must pay a fee and take a compulsory 150-question examination about New York City topics, of which they must get at least 97 questions correct. [14] [15] [16] As of 2018 [update], over 3,000 guides have certification. [16]

In 1992, the " Greeter" initiative was founded by Lynn Brooks with the association "Big Apple Greeter" in New York City. [17] The voluntary and personal hosting of tourists should improve the bad image of the megacity. More "Greeter" projects followed in other United States cities and worldwide. More than 300 volunteers "greet" over 7,000 visitors per year in New York City as of 2010 [update]. [18] 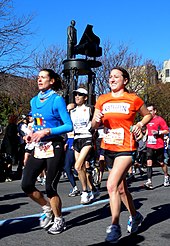 New York City has a rich musical culture and history. [20] Accordingly, numerous jazz, gospel music, rock and roll, rhythm and blues and hip hop tours are available. Popular locations for music tours include Harlem and the East Village, which is home to several historical sites related to the birth of punk music. [21] Walking tours are one of the most popular ways of seeing the city and many private guides supply tours. Companies producing audio walking tours include the Gesso app. [22]

Food tours are another option for visitors. New York is one of the top culinary destinations in the world. New York's food culture, influenced by the city's immigrants and large number of dining patrons, is diverse. Jewish and Italian immigrants made the city famous for bagels, cheesecake and New York-style pizza. Some 4,000 mobile food vendors, many of them immigrants, are licensed by the city and have made Middle Eastern foods such as falafel and kebabs standbys of contemporary New York street food. [23] The city is also home to many of the finest haute cuisine restaurants in the United States. [24] Food tours allow visitors to try a wide variety of these foods economically and learn about the city's culture. [25] Tour companies include New York Food Tours, Local Finds Queens Food Tours and Rum and Blackbird Tasting Tours. [26]

All of the below attractions are located in Manhattan unless otherwise stated. Only attractions with more than 2 million visitors are listed. The most visited attractions in New York City include:

Wikivoyage has a travel guide for New York City.