From Wikipedia, the free encyclopedia
Stock exchange in Tokyo, Japan

The Tokyo Stock Exchange (東京証券取引所, Tōkyō Shōken Torihikijo), abbreviated as Tosho (東証) or TSE/TYO, is a stock exchange located in Tokyo, Japan. It is the third largest stock exchange in the world by aggregate market capitalization of its listed companies, and the largest in Asia.[ citation needed] It had 2,292 listed companies with a combined market capitalization of US$5.67 trillion as of February 2019.[ citation needed]

The exchange is owned by the Japan Exchange Group (JPX), a holding company that it also lists ( TYO: 8697). JPX was formed from its merger with the Osaka Exchange; the merger process began in July 2012, when said merger was approved by the Japan Fair Trade Commission. [1] JPX itself was launched on January 1, 2013. [2]

The TSE is incorporated as a kabushiki gaisha ( joint-stock company) with nine directors, four auditors and eight executive officers. Its headquarters are located at 2-1 Nihonbashi- Kabutochō, Chūō, Tokyo which is the largest financial district in Japan.

The main indices tracking the stock market of TSE are the Nikkei 225 index of companies selected by the Nihon Keizai Shimbun (Japan's largest business newspaper), the TOPIX index based on the share prices of Prime companies, and the J30 index of large industrial companies maintained by Japan's major broadsheet newspapers. There are also active bond market and futures market.

The exchange's press club, called the Kabuto Club ( 兜倶楽部, Kabuto kurabu), meets on the third floor of the TSE building. Most Kabuto Club members are affiliated with the Nihon Keizai Shimbun, Kyodo News, Jiji Press, or business television broadcasters such as Bloomberg LP and CNBC. The Kabuto Club is generally busiest during April and May, when public companies release their annual accounts.

The exchange's normal trading sessions are from 9:00 a.m. to 11:30 a.m. and from 12:30 p.m. to 3:00 p.m. on all days of the week except Saturdays, Sundays and holidays declared by the Exchange in advance. [3] The exchange is closed for the following holidays: New Year's Day, Coming of Age Day, National Foundation Day, Vernal Equinox Day, Shōwa Day, Constitution Memorial Day, Greenery Day, Children's Day, Marine Day, Respect for the Aged Day, Autumnal Equinox, Health and Sports Day, Culture Day, Labour Thanksgiving Day, and The Emperor's Birthday. [4]

First, Second and other Sections until April 4, 2022 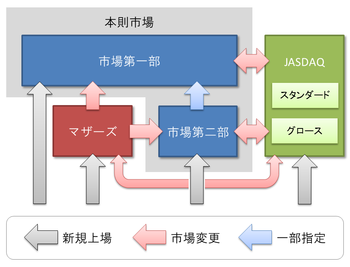 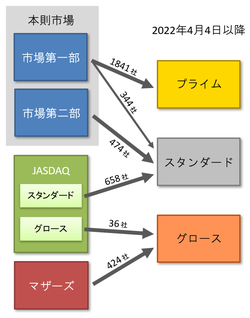 Number of companies transitioning into the new market division structure on April 4, 2022 (in Japanese).

In 1943, the exchange was combined with eleven [7] other stock exchanges in major Japanese cities to form a single Japanese Stock Exchange ( 日本証券取引所, Nippon Shōken Torihikisho). The combined exchange was shut down on August 1, days before the bombing of Hiroshima.

Logo used prior to JPX merger

The Tokyo Stock Exchange reopened under its current Japanese name on May 16, 1949, pursuant to the new Securities Exchange Act.

The current TSE building was opened on May 23, 1988, replacing the original TSE building from 1931, and the trading floor of the TSE was closed on April 30, 1999, so that the exchange could switch to electronic trading for all transactions. A new facility, called TSE Arrows ( 東証アローズ, Tōshō Arrows), opened on May 9, 2000. In 2010, the TSE launched its Arrowhead trading facility. [8]

In 2001, the TSE restructured itself as a kabushiki gaisha ("stock company"): before this time, it was structured as an incorporated association ( 社団法人, shadan hōjin) with its members as shareholders.

The London Stock Exchange (LSE) and the TSE are developing jointly traded products and share technology, marking the latest cross-border deal among bourses as international competition heats up.

In July 2008, the LSE and the TSE announced a new joint venture Tokyo-based market, which will be based on the LSE's Alternative Investment Market (AIM). [10]

The exchange was only able to operate for 90 minutes on November 1, 2005, due to bugs with a newly installed transactions system, developed by Fujitsu, which was supposed to help cope with higher trading volumes. The interruption in trading was the worst in the history of the exchange until October 1, 2020. [11] Trading was suspended for four-and-a-half hours.

During yet another initial public offering, that of J-Com, on December 8, 2005, an employee at Mizuho Securities Co., Ltd. mistakenly typed an order to sell 600,000 shares at ¥1 each, instead of an order to sell 1 share at ¥600,000. Mizuho failed to catch the error; the Tokyo Stock Exchange initially blocked attempts to cancel the order, resulting in a net loss of US$347 million to be shared between the exchange and Mizuho. Both companies are now trying to deal with their troubles: lack of error checking, lack of safeguards, lack of reliability, lack of transparency, lack of testing, loss of confidence, and loss of profits. On 11 December, the TSE acknowledged that its system was at fault in the Mizuho trade. On 21 December, Takuo Tsurushima, chief executive of the TSE, and two other senior executives resigned over the Mizuho affair. [11] [13] [14] [15] [16] [17] [18] [19]

On January 17, 2006, the Nikkei 225 fell 2.8%, its fastest drop in nine months, as investors sold stocks across the board in the wake of a raid by prosecutors on internet company livedoor. The Tokyo Stock Exchange closed early on January 18 due to the trade volume threatening to exceed the exchange's computer system's capacity of 4.5 million trades per day. This was called the "livedoor shock". The exchange quickly increased its order capacity to five million trades a day. [20]

On October 1, 2020, for the first time in its history, the Tokyo Stock Exchange had to suspend trading in all shares for a whole day due to a technical glitch, causing buying and selling to freeze. This was announced just minutes before 9 a.m., when it was scheduled to open. [21] The problem was found to be in "the system for relaying market information", hence making the glitch a network problem, but the Asahi Shimbun reported that the glitch was due to a mechanical failure. Japan Exchange Group Inc., which operates the Tokyo Stock Exchange, said that the suspension would be indefinite until the problem was resolved. Other stock markets in Japan also suspended trading. [22] [23] [24] [25] Normal trading was resumed the following day. [26]