From Wikipedia, the free encyclopedia
Subway line in Tokyo, Japan

The line was named after the Ginza commercial district in Chūō, Tokyo, under which it passes. On maps, diagrams and signboards, the line is shown using the color orange(G), and its stations are given numbers using the letter "G".

Almost all Ginza Line trains operate on the line's full length from Asakusa to Shibuya. However, two trains depart in the early morning from Toranomon, and some late-night trains from Shibuya are taken out of service at Ueno. Along with the Marunouchi Line, it is self-enclosed and does not have any through services with other railway lines.

On weekdays, trains run every two minutes in the morning peak, every 2 minutes and 15 seconds in the evening peak, and every 3 minutes during the daytime. The first trains start from Shibuya and Asakusa at 05:01, and the last ones reach Shibuya at 00:37, and Asakusa at 00:39.

Being the oldest line on the Tokyo Metro, stations are also the closest to the surface—generally no more than one and a half stories underground. The western end of the line enters Shibuya Station located on the third-floor of a building that is located in a depression.

The Ginza Line was conceived by a businessman named Noritsugu Hayakawa, who visited London in 1914, saw the London Underground and concluded that Tokyo needed its own underground railway. He founded the Tokyo Underground Railway (東京地下鉄道, Tōkyō Chika Tetsudō) with Baron Furuichi Kōi in 1920, and began construction on September 27, 1925, after raising ¥6.2 million of the ¥35 million initially required to fund the project. [3] [4] 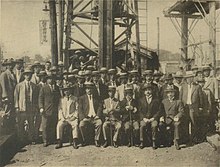 Originally, the Ginza Line was proposed to open from Shimbashi to Asakusa all at once, but because of a recession following the Great Kanto Earthquake, it became difficult to raise funds for the line. The portion between Ueno and Asakusa was completed on December 30, 1927, and publicized as "the first underground railway in the Orient". [3] Upon its opening, the line was so popular that passengers often had to wait more than two hours to ride a train for a five-minute trip.

On January 1, 1930, the subway was extended by 1.7 km to temporary Manseibashi Station, abandoned on November 21, 1931 when the subway reached Kanda, 500 meters further south down the line. The Great Depression slowed down construction, but the line finally reached its originally planned terminus of Shimbashi on June 21, 1934.

In 1938, the Tōkyō Rapid Railway (東京高速鉄道, Tōkyō Kōsoku Tetsudō), a company tied to the predecessor of today's Tokyu Corporation, began service between Shibuya and Toranomon, later extended to Shimbashi in 1939. The two lines began through-service interoperation in 1939 and were formally merged as the Teito Rapid Transit Authority ("Eidan Subway" or "TRTA") in July 1941 in accordance with the Land Transport Business Coordination Law (陸上交通事業調整法, Rikujō-kōtsu jigyō-chōsei-hō).

The "Ginza Line" name was applied in 1953 to distinguish the line from the new Marunouchi Line. In the postwar economic boom, the Ginza Line became increasingly crowded. The new Hanzōmon Line began to relieve the Ginza Line's traffic in the 1980s, but the Ginza Line is still quite crowded as it serves major residential, commercial, and business districts in central Tokyo. According to a 2018 release of Tokyo Metropolitan Bureau of Transportation [1], the Ginza Line is the seventh most crowded subway line in Tokyo, running at 160% capacity between Akasaka-Mitsuke and Tameike-Sannō stations. [5]

Automatic train control (ATC) and train automatic stopping controller (TASC) were activated on the Ginza Line on July 31, 1993, replacing the previous mechanical automatic train stop (ATS) system. [6] This allowed for an increase in the maximum operating speed limit from 55 km/h (34 mph) to 65 km/h (40 mph), which came into effect on August 2, 1993. [7] The newest station on the line, Tameike-Sannō Station, opened in 1997 to provide a connection to the newly built Namboku Line.

The line, station facilities, rolling stock, and related assets were inherited by Tokyo Metro after the privatization of the Teito Rapid Transit Authority (TRTA) in 2004. [8] 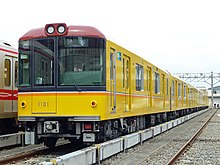 Cars are stored and inspected at Shibuya Depot located after Shibuya Station and at Ueno Inspection Division (上野検車区, Ueno-kensha-ku), a facility located northeast of Ueno Station with both above-ground and underground tracks. The facility is capable of holding up to 20 6-car formations. Major inspections are carried out at Tokyo Metro's Nakano depot on the Marunouchi Line, forwarding over a connecting track at Akasaka-Mitsuke.

The last remaining 01 series trains were withdrawn from regular service on 10 March 2017. [10]