From Wikipedia, the free encyclopedia
National research university in Japan
Not to be confused with Tokyo University of Technology.

Tokyo Institute of Technology (東京工業大学, Tōkyō Kōgyō Daigaku, official abbreviations Tokyo Tech, Tokodai or informally TITech, TIT) [1] is a national research university located in Greater Tokyo Area, Japan. Tokyo Tech is the largest institution for higher education in Japan dedicated to science and technology, one of first five Designated National University and selected as a Top Type university of Top Global University Project by the Japanese government. It is generally considered to be one of the most prestigious universities in Japan.

Tokyo Tech's main campus is located at Ōokayama on the boundary of Meguro and Ota, with its main entrance facing the Ōokayama Station. Other campuses are located in Suzukakedai and Tamachi. Tokyo Tech is organised into 6 schools, within which there are over 40 departments and research centres. [2] Tokyo Tech enrolled 4,734 undergraduates and 1,464 graduate students for 2015–2016. [3] It employs around 1,100 faculty members. Tokyo Institute of Technology produced a Nobel Prize laureate in Chemistry Hideki Shirakawa Ph.D.

Tokyo Institute of Technology was founded by the government of Japan as the Tokyo Vocational School on May 26, 1881, [4] 14 years after the Meiji Restoration. To accomplish the quick catch-up to the West, the government expected this school to cultivate new modernized craftsmen and engineers. In 1890, it was renamed Tokyo Technical School. In 1901, it changed name to Tokyo Higher Technical School.

Throughout the post-war reconstruction of the 1950s, the high economic growth era of the 1960s, and the aggressive economic era marching to the Bubble Economy of the 1980s, TIT kept providing Japan its leading engineers, researchers, and business persons. Since April 2004, it has been semi-privatized into the National University Incorporation of Tokyo Institute of Technology under a new law [7] which applied to all national universities.

Operating the world-class supercomputer Tsubame 2.0, [8] and making a breakthrough in high-temperature superconductivity, Tokyo Tech is a major centre for supercomputing technology and condensed matter research in the world.

In 2011, it celebrated the 130th anniversary of its founding. [9] In 2014, it joined the edX consortium and formed the Online Education Development Office (OEDO) [10] to create MOOCS, which are hosted on the edX website. [11]

In its 130 years, Tokyo Tech has provided scientific researchers, engineers and many social leaders, including Naoto Kan who is a former prime minister.

The main building of Ookayama Campus 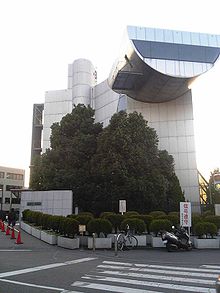 The Centennial Hall in Ōokayama campus, designed by the renowned architect Kazuo Shinohara, professor at Tokodai

TokyoTech comprises 6 schools, a number of departments and Institute for Liberal Arts. [12]

1,200 students and staff visit the library each day.
It has 674,000 books and 2,500 journals, including 1,600 foreign academic journals; the number of international research collections is the largest in Japan. It provides around 7,000 registered electronic journals each year. The library is therefore recognised for the outstanding national and international importance and awarded 'Centre of foreign journals' by the government of Japan. Renewal construction of the library was completed in July 2011.

Tokyo Tech runs intensive programmes for obtaining master degree or PhD. Called the Tokyo Tech's International Graduate Program, the programmes are targeted at international students of high academic potential who are not Japanese speakers. Lectures and seminars are given in English mainly by Tokyo Tech's faculty members. [15] Programme starting dates are October or April. Public fundings for these courses are also available; those students who have academic excellence may apply for scholarships from the Ministry of Education, Culture, Sports, Science and Technology of Japan.

Tokyo Tech is one of the most prestigious universities in Japan. It can be seen in the several rankings such as shown below.

Weekly Diamond also reported that Tokyo Tech has the highest research standard in Japan in terms of research fundings per researchers in COE Program. [36] In the same article, it's also ranked 8th in terms of the quality of education by GP funds per student.

In addition, according to the September 2012 survey by QS World University Rankings about the general standards in Engineering and Technology field, Tokyo Tech was placed 19th (world), 2nd (national). [37]

The Tsubame 2.0, which is a large-scale supercomputer in Tokyo Tech, was ranked 5th of the world best-performed computer. 1st in the world as university's owned one, this supercomputer is used for simulation related to the complex systems such as the dynamics of planets or financial systems.

As Tokyo Tech has been emphasizing on 'practical' research, Tokyo Tech got the 2nd place at the number of patents accepted (284) during 2009 among Japanese Universities. [38]

Alumni of Tokyo Tech enjoy their good success in Japanese industries. According to ( Truly Strong Universities -TSU), the alumni's of Tokyo Tech has been acquiring the highest (1st) employment rate within Japan. [39]

According to the Weekly Economist's 2010 rankings and the PRESIDENT's article on 2006/10/16, graduates from Tokyo Tech have the 2nd best employment rate in 400 major companies, and the average graduate salary is the 9th best in Japan. [40] [41] École des Mines de Paris ranks Tokyo Tech as 92nd in the world in 2011 in terms of the number of alumni listed among CEOs in the 500 largest worldwide companies. [42] Also, according to the article of The New York Times- Universities with the most employable students ranking 2012, Tokyo Tech ranked 14th place in the world (2nd in Asia, 1st in Japan). [43]

As of 2009, there is a large population of rose-ringed parakeets residing at the main campus of the Tokyo Institute of Technology in Ookayama. [55] [56] [57]

Wikimedia Commons has media related to Tokyo Institute of Technology.