From Wikipedia, the free encyclopedia
(Redirected from Tisch School of the Arts)
Performing arts institute in New York City 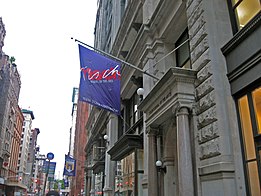 A Tisch School flag (with an older logo) displayed at the building's main entrance, c. 2007.

Founded on August 17, 1965, Tisch is a training ground for artists, scholars of the arts, and filmmakers. The school is divided into three Institutes: Performing Arts, Emerging Media, and Film & Television. Many undergraduate and graduate disciplines are available for students, including: acting, dance, drama, performance studies, design for stage and film, musical theatre writing, photography, record producing, game design and development, and film and television studies. [1]

The school also offers an inter-disciplinary "collaborative arts" program, [2] high school programs, continuing education in the arts for the general public, as well as the Clive Davis Institute of Recorded Music, [3] which teaches entrepreneurial strategies in the music recording industry. A dual MFA/ MBA graduate program is also offered, allowing students to take coursework at both Tisch and NYU's Stern School of Business. [4] It is located at 721 Broadway (the intersection of Broadway St. and Waverly Place), adjacent to the university's Department of Philosophy building and the Gallatin School of Individualized Study, in the Greenwich Village neighborhood of Lower Manhattan, New York City. In 2013, NYU opened a new technology hub on its Brooklyn campus called the Media and Games Network (MAGNET). Located at 2 MetroTech Center and, beginning in 2019, 370 Jay Street, MAGNET houses three Tisch programs: the Clive Davis Institute of Recorded Music, the Interactive Telecommunications/Interactive Media Arts programs (ITP & IMA), and the Game Center; these programs work in collaboration with departments in media technology from NYU's Tandon School of Engineering and Steinhardt School of Culture, Education, and Human Development. [5]

In 1982, the school's second dean, David Oppenheim, solicited a donation [9] from Laurence A. and Preston Robert Tisch that made possible the acquisition and renovation of the location at 721 Broadway where most of the school's programs are housed. In recognition of the generosity of the Tisch family, the school was renamed Tisch School of the Arts in 1982. [10]

The three institutes are:

The school also offers an inter-disciplinary "collaborative arts" program, [2] as well as the Clive Davis Institute of Recorded Music (founded by Sony Music CEO Clive Davis), one of the few programs in the US to combine musical arts and business strategies in the recording industry. [3] A dual MFA/ MBA graduate program is also offered, allowing students to take coursework at both Tisch and NYU's Stern School of Business. [4] It also offers high school programs (the "Tisch Summer High School Program" and "Spring Future Artists Programs") as an outgrowth of the undergraduate classes, [12] and professional courses for the general public as part of a commitment to continuing education in the arts. [13]

Tisch School of the Arts, Asia

The anticipated enrollment figures were not achieved, financial losses and embezzlement were alleged and Tisch Asia President Pari Sara Shirazi was dismissed from her post by NYU in November 2011. [17] She subsequently lost a lawsuit claiming defamation and breach of contract. [18] The Tisch Asia campus closed in 2014, with polarised recollections, ranging from positive endorsement, to allegations that it had been "an educational scam" in a failed lawsuit brought by three former students. [19] [20] [21]

During the COVID-19 pandemic of 2020, which forced NYU to move academic instruction online, many Tisch students demanded a tuition refund, believing that virtual classes did not adequately meet their academic needs as a school for performing, cinematic, and media arts. In one of many pandemic-related emails, the school's dean sent students a video of herself dancing to R.E.M.'s "Losing My Religion", intended to raise community spirit. [22] After hearing from students, the dean further clarified that individual schools have no control over tuition and that it was "challenging" for the university to give students their money back at the time.