From Wikipedia, the free encyclopedia
American television studio
This article is about the Disney Company's production facilities. For the daytime division of the Disney-ABC Television Group, see Times Square Studios (division).
Not to be confused with MTV's studios across the street at One Astor Plaza.

Times Square Studios (TSS) is an American television studio owned by The Walt Disney Company, located on the southeastern corner of West 44th Street and Broadway in the Times Square area of the borough of Manhattan. The studio is best known as the production home of ABC News' Good Morning America (GMA), a morning news and talk program, segments for other ABC News programs, and various programs on ESPN. 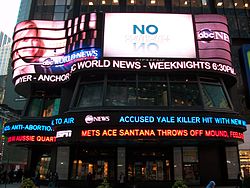 Studio exterior 3 years after 2007 refurbishment, January 2010. An advertisement for ABC World News with Diane Sawyer can be seen on the left.

Times Square Studios is on the site of the former Hotel Claridge, built in 1911. In 1972, the hotel was demolished and the current structure, which housed the National Theater, [1] and a Beefsteak Charlie's restaurant, was built. The theater closed in 1998.[ citation needed]

The New York Times felt that Times Square Studios was meant to be a response to the "Window on the World" Studio 1A NBC had launched at Rockefeller Center for its morning show Today in 1994—which marked an era of dominance for the program over ABC's competing Good Morning America. It was argued that Disney needed its own on-air showpiece in a prominent location, and that "a dynamic Manhattan street scene is now considered an essential production element for a morning show". [2]

The facility was designed by Walt Disney Imagineering, Disney's design and development arm, and its senior vice president of concept design Eddie Sotto. The team also worked with Roger Goodman, ABC's vice president for special projects, on its facilities for Good Morning America. Sotto stated that the design of the building was meant to symbolize a " looking glass" and the idea of "media as architecture". The facade of the building also features a video screen and a pair of news tickers, both of which are upgraded with state-of-the-art display technology every few years. [2]

Alongside ABC News productions such as Good Morning America, Disney also intended to lease space at the studio for other productions. [2] Under the direction of Tim Hayes, notable early productions originating from Times Square Studios included 20/20, Primetime, ABC College Football, NBA Shootaround, The Insider, Entertainment Tonight, and many others between the years 1999 and 2007. The studio began to serve primarily as the home to Good Morning America in 2007 and ended their work with most other programs in the facility. 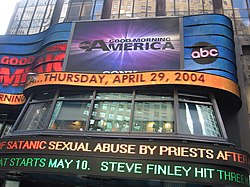