This article is a timeline of the history of New York City in the state of New York, US.

This is a dynamic list and may never be able to satisfy particular standards for completeness. You can help by adding missing items with reliable sources.

March 29: A bomb that exploded in Grand Central Terminal, injuring no one, marked the end of self-imposed hiatus of George Metesky, a.k.a. the "Mad Bomber". In 1951 alone he had five bombs explode at New York City landmarks, such as the New York Public Library Main Branch. [101] 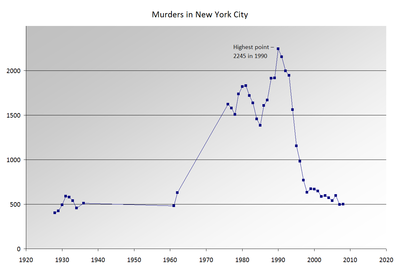 Chart of murders in the NYC area by year

Outside of the city